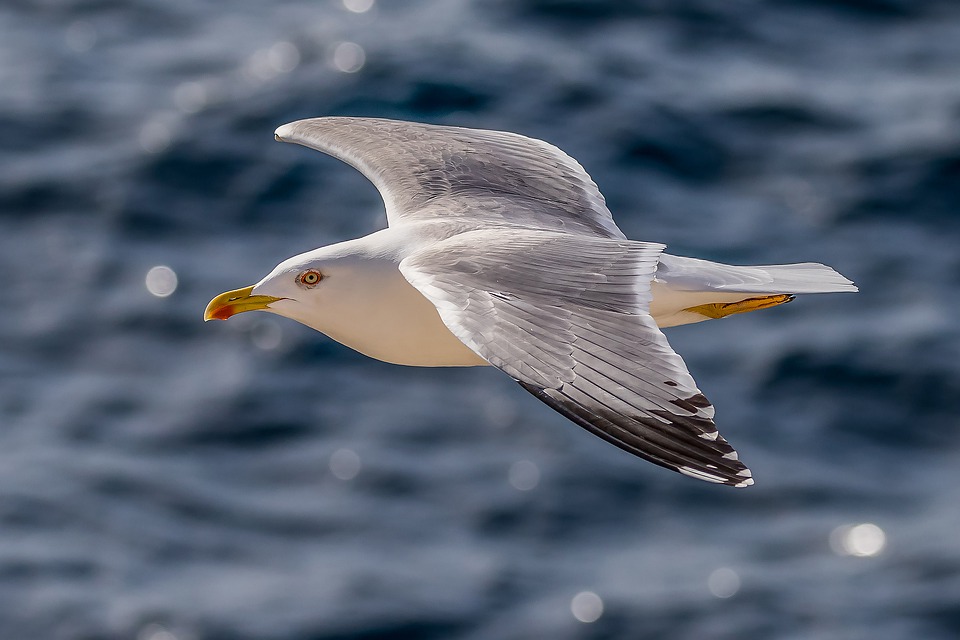 Herring Gull is medium-to-large-sized sea birds with long pointed wings, a stout, slightly hooked bill, and webbed feet. They are plentiful in temperate coastal areas and throughout the Great Lakes. Although these gulls habitually may feed from garbage dumps and landfills. But the most take natural prey.

Gulls nest primarily in colonies, although some of the larger species also nest solitary. Many populations migrate annually between breeding and wintering areas. North American gull species range in size from Bonaparte’s gull 33 cm bill tip to tail tip to the great black-backed gull is 76 cm.

The Herring Gull (Larus argentatus) is 64 cm, has the largest range of any North American gull, from Newfoundland south to the Chesapeake Bay along the north Atlantic and west throughout the Great Lakes into Alaska. Along the Pacific coast, the similar-sized western gull (L. occidentalis) is the ecological equivalent of the herring gull.

Both species take primarily natural foods, especially fish, though some individuals of both species forage around fishing operations and landfills. The increase in the number of herring gulls in this century has been attributed to the increasing abundance of year-round food supplies found in landfills.

However, birds specializing in garbage have such low reproductive success that they cannot replace themselves in the population. An alternative explanation of the species’ expansion is that cessation of the taking of gulls by the feather industry in the late 1800’s. This has allowed gull numbers to return to pre-exploitation levels.

Adult females are normally 800 to 1,000 g significantly smaller than males 1,000 to 1,300 g in both the herring gull and the western gull. The chicks grow from their hatching weight of about 60 to 70 g to 800 to 900 g within 30 to 40 days. Once after which time their weight stabilizes. The Adults show seasonal variation in body weight.

Nesting colonies of herring gulls along the northeastern coast of the United States are found primarily on sandy or rocky offshore or barrier beach islands. In the Great Lakes, they are found on the more remote, secluded, and protected islands and shorelines of the lakes and their connecting rivers. Smaller colonies or isolated pairs also can be found in coastal marshes.

The peninsulas, or cliffs along seacoasts, lakes, and rivers, and occasionally in inland areas or on buildings or piers. Gulls are the most abundant seabirds offshore from fall through spring. They are only found predominantly inshore during the breeding season in late spring and summer season. Herring Gulls forage predominantly offshore, within 1 to 5 km of the coast. In all seasons the number of birds feeding at sea outnumber those feeding inshore.

Inshore, Herring gulls forage primarily in intertidal zones but also search for food in wet fields, around lakes, bays, and rock jetties, and at landfills in some areas. In Florida, herring gull presence at landfills is restricted to the winter months December through April. They may consist primarily of first-year birds that migrated from more northerly populations (e.g., from the Great Lakes).

Gulls feed on a variety of foods depending on availability, including fish, squid, crustacea, molluscs, worms, insects, small mammals and birds, duck and gull eggs and chicks, and garbage. Gulls forage on open water by aerial dipping and shallow diving around concentrations of prey.

At sea, such concentrations often are associated with whales or dolphins, other seabirds, or fishing boats. In the Great Lakes, concentrations of species such as alewife occur seasonally when spawning. Gulls also forage by stealing food from other birds and by scavenging around human refuse sites i.e., garbage dumps, fish plants, docks, and seaside parks.

Individual pairs of gulls may specialize predominantly on a single type of food; for example, three quarters of a population of herring gulls in Newfoundland were found to specialize either on blue mussels, garbage, or adults of Leach’s storm-petrel, with 60 percent of the specialists concentrating on mussels between 0.5 and 3 cm in length.

Diet choices may change with the age and experience of adult birds as well as with the availability of prey. Females take smaller prey and feed less on garbage than do males). Females to feed more on smelt (100 to 250 mm) and males more on alewife (250 to 300 mm) in the Great Lakes region.

Adult gulls sometimes attack and eat chicks of neighboring gulls or other species of seabird. Juveniles up to 3 years of age forage less efficiently than adults. In the Great Lakes, herring gulls’ high consumption of alewife during their spawn may result in high exposures of the gulls to lipophilic contaminants that bio-magnify.

It is estimated an annual energy budget for free-living female herring gulls that breed in the Great Lakes and an annual energy budget for free-living juvenile herring gulls in the Great Lakes in their first year. Between September and March, the non-breeding season, they estimate that adult females require 250 to 260 kcal/day.

Following a dip in energy requirements to 210 kcal/day when the male feeds the female during courtship, the female’s needs increase to peak at 280 kcal/day for egg production, then fall to approximately 210 kcal/day during incubation. The energy required to forage for food for the chicks is substantial, rising through July to peak in August at 310 to 320 kcal/day.

However, then declining again until September when feeding chicks has ceased. These estimates compare well with those derived from Nagy’s equation to estimate free-living metabolic rates for seabirds. Except that the energy peaks required is to produce eggs and to feed chicks are not included in Nagy’s model. The overview of seabird energetic and additional discussion to approaches and models for estimating metabolic rates of free-ranging seabirds.

Herring Gull chicks are downy gray with dark brown spotting and molt into a dark-gray or brown mottled juvenile plumage. At the end of the first year, portions of the plumage have paled, and by the second year, gray plumage develops along the back and top of wings. By their third year, young gulls resemble dirty adults, and they acquire their full adult plumage by 4 years.

The adult gulls, at least in some populations, begin their primary feather molt during incubation and complete the molt by mid-to-late fall. They molt and replace the large body feathers from mid-summer to early fall.

Herring gull populations along the northeast coast of North America tend to be migratory, while adult herring gulls of the Great Lakes are year-round residents. Along the western North Atlantic, most herring gulls arrive on their breeding grounds between late February and late April.

They remain until late August or early September when they leave for their wintering grounds along the Atlantic and Gulf coasts or well offshore. Therefore, the adult and older sub-adult herring gulls in the Great Lakes area are essentially non-migratory. Thus, in contrast to other fish-eating birds in the Great Lakes system that migrate south in the winter, herring gulls are exposed to any contaminants that may be in Great Lakes’ fish throughout the year.

The post-breeding dispersal away from breeding colonies starts in late July and ends in August, with all ages traveling short distances. Great Lakes herring gulls less than a year old usually migrate to the Gulf or Atlantic coast, traveling along with river systems and the coast.

Herring Gulls nest primarily in colonies on offshore islands, and nest density is strongly affected by population size. Naturally, males arrive at the breeding grounds first and establish territories. Both sexes build the nest of vegetation on the ground in areas that are sheltered from the wind but may be exposed to the sun. Males feed females for 10 to 15 days prior to the start of egg-laying.

From the laying of the first egg until the chicks are 3 to 4 weeks old, one or both parents will always be present. Males perform most territorial defense, females perform most incubation, and both parents feed the chicks until they are at least 6 to 7 weeks old. All gulls are strongly monogamous; pair bonds can persist for 10 or more years and usually only are terminated by the death of a mate or failure to reproduce successfully.

Males may be promiscuous in populations with more females than males. Herring gull colonies often are found in association with colonies of other species, including other gulls. In some nesting colonies, gulls attack chicks of neighboring gulls and other species.

During the breeding season, herring gulls defend a territory of several tens of square meters around the immediate vicinity of the nest. Their daily foraging range depends on the availability of prey and on the foraging strategy, age, and sex of the gull. Also, they are using radio telemetry on gulls in the Great Lakes.

This has demonstrated that some parents with chick’s forage at specific locations within one km of the colony. Whereas other parents make extended flights to destinations across a lake more than 30 km away. Similarly, gulls that feed at sea may range tens of kilometers from their nest whereas gulls from the same colony feeding in the intertidal zone may travel less than one km. Males typically range farther than females and take larger prey items. At sea during the non-breeding season, gulls may range hundreds of kilometers during a day.

Population density. As described above, population density is determined by available nesting space, size of the breeding population, and quality of habitat. Small islands with good feeding areas nearby can have several hundred nests per hectare. In poor quality habitat, some pairs nest solitary without another nest for several kilometers.

Herring gulls and western gulls usually do not start breeding until at least four years of age for males and 5 years of age for females. However, in a given year, 15 to 30 percent of adults of breeding age does not breed. Most breeding females produce three-egg clutches, but individuals in poor condition may lay only one or two eggs.

Herring gulls will lay replacement eggs if all or a portion of their original clutch is destroyed. Hatching success appears to be influenced by female diet, with garbage specialists hatching a smaller percentage of eggs than fish or intertidal (mussel) specialists. Predation, often by gulls of the same or other species, also contributes to egg losses.

Many herring gull chicks that hatch die before fledgling, most within the first 5 days after hatching. Adult mortality is low (around 10 percent per year), and some birds may live up to 20 years. Sub adult birds exhibit higher mortality of 20 to 30 percent per year.