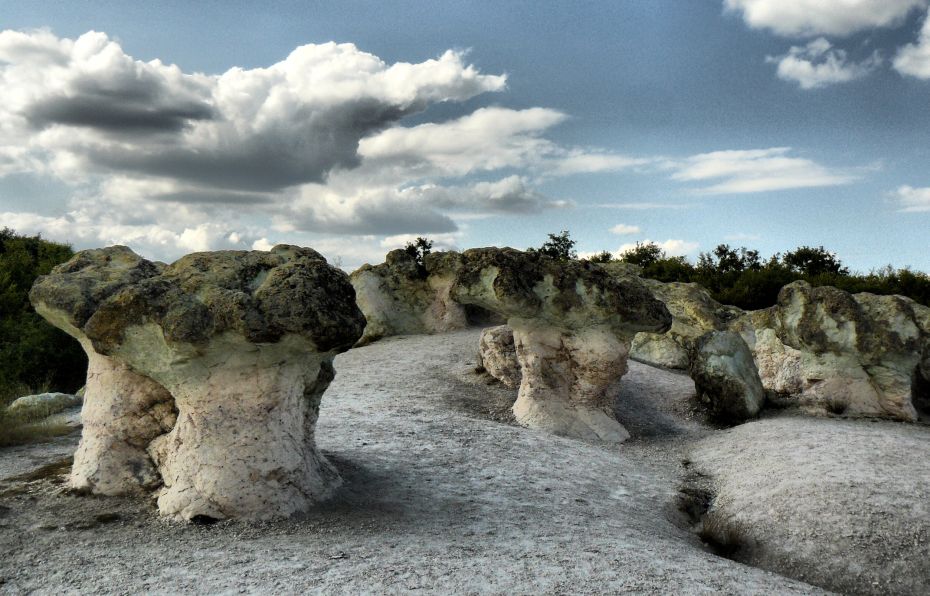 Stone mushrooms” is a natural phenomenon in Bulgaria. It is located 1 km from the village of Beli Plast, on the road between the towns of Haskovo and Kardzhali. These rocks are natural limestone formations with a height of up to 3 meters; occupy an area of about 30 acres. Stone mushrooms are one of the more unique and whimsical rock formations you’ll ever see.

Of course, it takes hundreds of years of erosion for that process to be complete; formations like the aptly named Turnip Rock in Michigan or Jug Rock in Indiana bear a distinct resemblance to mushrooms. But the stone mushrooms in Beli Plast, Bulgaria are extremely unique, as entire clumps of massive stone pillars grouped together just like mushrooms in the wild.

They are formed just the way table rocks are formed eroded into shape over years and years, as the water that once nearly submerged them lapped against there walls. And than eroded some more by the wind long after the water had receded for good.

It was not until the 19th century that the science behind the mushroom stones or wave stones as they are sometimes called was verified. Then it was discovered that this odd natural phenomenon was the result of enormous limestone boulders which have been unearthed to water for regular and prolonged intervals.

It was also discovered at that time that they were what is now known as glacial erratic.  That is they are huge boulders that have been pushed downwards by the sheer force of a glacier and so may not even have any similarity to the stone where they eventually remained. The stone mushrooms are thought to be more than 70 million years old and their formation started in the Cenozoic era. Ice Age relocated the large masses of rocks from another area.
Advertisement

Though, much stronger limestone, unusual for this region, appeared over the previous layer. Then, nature created a lake on this place, which started to wash away these rocks. Therefore, different material of rocks exposes the unevenness of erosion, just like a sculptor has carved such original mushrooms of stone. Thus, “Legs” were formed from the local limestone and the “hats” from the stronger material of the Ice Age. Moreover, mushrooms are varying in shapes and the color pink, black and blue.

Moreover, these places always give rise to legends and popular legends beliefs; this case is not an exception. One of them expresses that once upon a time the local blacksmith “Radun” had four daughters. They’ve very kind hearts and like to help there father & family, but one day they carried water from the river outside the fortress of Perperikon.

Hence, as usual, the girls went to the river and saw the army of enemies approaching the village. The girls ran back to caution the locals about the impending fight. They were able to manage to close the gate and the enemies were not able to go inside.

But after a few days, a traitor let the army of enemy attack the village and all of its residents were captured. The daughters of the blacksmith were also in imprisonment, but, they were managed to escape. Thus, invaders gave chase and caught the girls. One of the invaders was so cruel that grabbed one of the sisters and cut off the poor girl’s head.

It is believed that at the same moment when the head touched the ground, it turned into a stone similar to a mushroom. He killed the other girls brutally in the same way and everything repeated and turned there heads into the stones mushrooms. The invader was so frightened after that, and he decided to flee, but he took just one step and also turned into stone.

Then, the hostile army, distraught from fear, found this place cursed. They released all the prisoners and freed the village forever. Now, peoples have different superstitions believe that the morning dew on the rocks is tears of the dead girls who saved the village with there lives. In 1974, these stone mushrooms were recognized tourist attraction of the national importance.