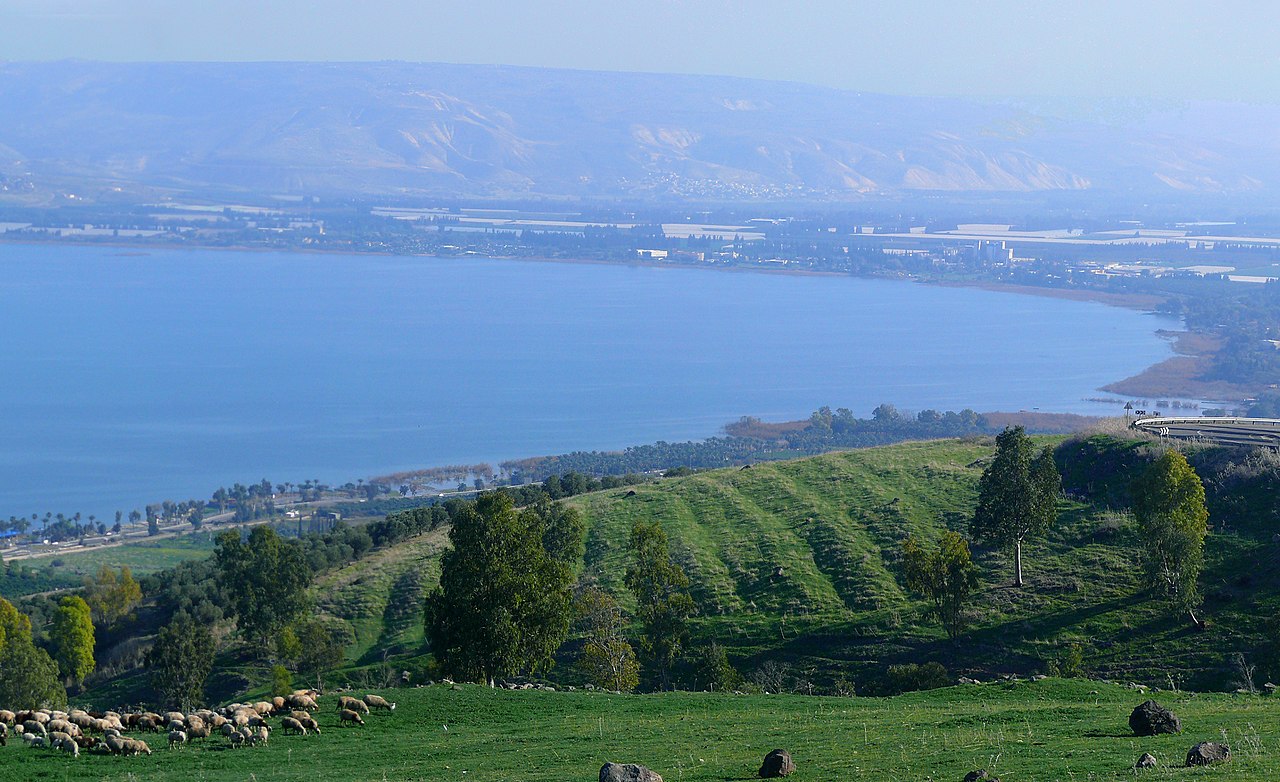 The Sea of Galilee (Lake Tiberias) is a magnificent geographical marvel surrounded by pretty rural agricultural settlements. It is not a real sea – it is called a sea because of tradition. Lake Tiberias is largest fresh water lake in Israel’s. The lake measures 53 km in circumference 21KM north-south and 141 feet deep. The Lake Tiberias (Seas of Galilee) is partly fed by underground springs related to the Jordan sector of the Great Rift Valley.

The maximum water comes from the Jordan River. Which is winding course can be seen draining the south end of the lake at bottom. The Jordan River rises on the slopes of Mount Hermon, on the border between Syria and Lebanon, and flows southward through northern Israel to the Sea of Galilee. Thus, the other streams and wadis (seasonal watercourses) flow into the lake from the hills of Galilee.

Lake Tiberias is also famous as the Sea of Tiberias, Lake of Gennesaret, Lake Kinneret, and the Sea of Galilee. This is the lowest freshwater lake on Earth and the second-lowest lake in the world after the Dead Sea. Lake Tiberias is situated between Golan Heights and Galilee region in the Jordan Rift Valley. This is area has the history of volcanic history evident by the abundant basalt and igneous rocks that define the geology of Galilee.

The Lake Tiberias warm water supports various flora and fauna. That supported commercial fishery for over 20 years. The notable fish species to be found include damselfish, scaleless blennies, catfish, mouthbreeders, and barbels. Sea of Galilee is one of the earliest settled areas and brags archaeological ruins sitting together with some of the first pioneering settlements in Israel, as well as religious sites, modern cities, and endless outdoor pursuits.

The Lake Tiberias (Sea of Galilee), is Drying Up

Sea of Galilee has severe drought as of 2018 from many years. The Lake Tiberias is expected to get to the black line the lowest depth from which irreversible damage start and no water can be pumped out anymore. However, in Sep 2018 the Israeli energy and water office announced a project to purr desalinated water from the Mediterranean Sea into the Sea of Galilee.

They will be using an underground tunnel expected to be largest of its kind done in Israel. This project will transfer half of the Mediterranean desalted water and will push 300 to 500 Million cubic litters of water per year. Three-quarters of the drinking water consumed by Israeli households comes from these desalination plants.

The Sea of Galilee, has suffered from four consecutive years of rain shortages, make the water situation is serious. The lake has fallen to its lowest level in 100 years. The Israeli government monitors water levels and publishes the results daily at official web site. The Lake Tiberias is at risk of becoming irreversibly salinized by the salt water springs under the lake. Which are held in check by the weight of the freshwater on top of them? Tourism around the Lake Tiberias is an important economic branch.

The shortage of rainfall is affecting agriculture, the environment and animal life in the nearby area. About five miles on the east side of Sea of  Galilee there is Hamat Gader situated – a hot springs one of Israel’s most popular attractions. With mineral springs of up to 50 degrees, there have been ancient baths here for almost 2000 years. Their is also an alligator and rare exotic bird reserve. The region also has loads of hiking trails, including Sea of Galilee Trail which encircles the lake.

One of major point is mentioned in Islam that sea Galilee will drying up actually is one of the signs of end of times! The disappearing Sea of Galilee and Emergence of DAJJAL the Anti-Christ, Prophet Muhammed (PBUH) told humans 1400 years ago!

When the Sea of Galilee dries up the Prophet Isa (A.S) will return and Gog and Magog will drink the entire water and then thy will be destroyed. The prophecy of the drying up of Lake Tiberias (Sea of Galilee) is established from two Authentic Hadith.