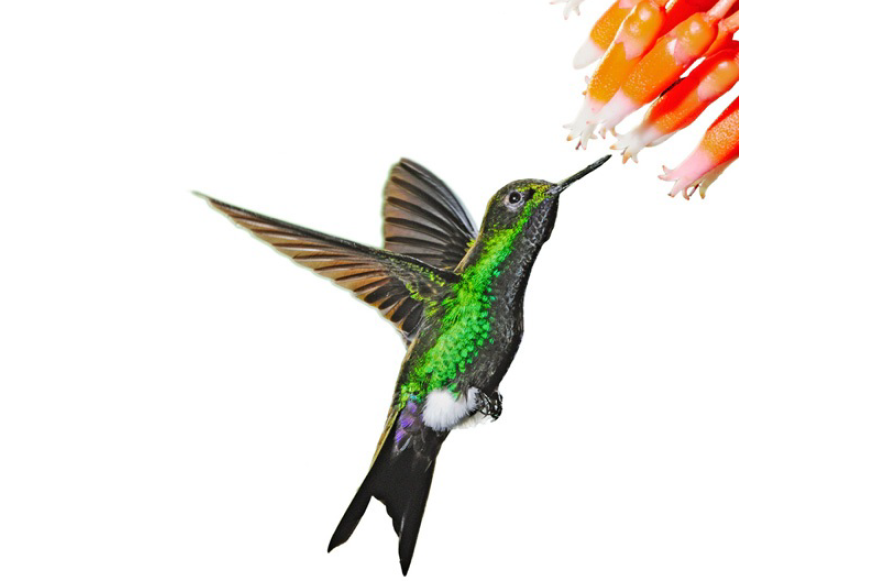 Description: Glowing Puffleg (Eriocnemis vestita) is fairly a small hummingbird species in the family Trochilidae. This hummingbird has a short but deeply forked tail. This is mainly found in Venezuela, Peru, Ecuador, and Colombia.

Identification: This is medium size hummingbird, which is mostly bright green but with an iridescent violet vent, chin patch, blue belly, blackish breast, and distinguish white eyes spot. The leg cuffs are white. The female’s chin patch is much reduced, and she has extensive golden speckling on her breast and chin. Moreover, males and females have noticeable large white puffs at the base of their legs, much bigger than Buff-tailed Coronet’s white puffs.

Subspecies: – There are four subspecies: that is subsp. vestita; subsp. arcosae; subsp. paramillo, in which the violet of the chin extends patchily to the breast; and subsp. smaragdinipectus, which has a lighter green breast. This is a lively territorial bird that defends clumps of flowers such as Palicourea, and other flowers with short corollas. It usually feeds at low heights and is very quick and hence difficult to track. It may hover or cling when feeding and catches insects while in flight. Although it is rather localized and not especially common, its population is believed to be stable.

Call/Song/Sounds/Vocalizations: – Similar to other hummingbirds, Glowing Puffleg’s are usually silent, but quite often their sounds (usually call after taking flight) is described as a monotonous frequent metallic “tsip tsip tsip”.

Nest: Male does not participate in building the nest or even selecting the site or raising the chicks. Normally, females build a cup-shaped nest with plant fibers woven, animal hairs, surrounding camouflage in a safe place at shrub, tree, or bushes. The hummingbird nest is mainly found on a low, thin horizontal branch.

Breeding: Usually, the clutch contains two white eggs, incubated by a female, while the male is protecting the territory and the flowers feed on. The chicks are immobile and born blind. The mother pushes the food down with her long bill into the chicks’ throats and their stomachs. Habitually, chicks are feed on for two weeks approximately, then he fly out within 20 days.

Status – The population is stable and consider the least concern.