We’ve always believed nature is so amazing and its creations sometimes baffle the human’s minds. Who is the creator of these bewilder species? Have you ever heard a snake can fly? Yes; Chrysopelea is famous for flying, actually belongs to the family Colubridae. Flying snakes are not too much venomous and considered harmless. Its toxicity is not dangerous to peoples.

Normally flying snake can be found in South Asian countries such as the Philippines, China, India, and Sri Lanka. Chrysopelea is notorious for “flying Snake” glides by using its ridge scales along its belly, pushing against rough bark surface of tree trunks, letting it move vertically up a tree. Chrysopelea hunts for foods during the day, and they like lizards, frogs, birds, and bats.

When he reaches the end of a tree’s branch the snake continues moving until its tail dangles from the branch end, and then it makes a J-shape bend leans forward to select the level of inclination it wishes to travel to control its flight paths, as well as selecting the desired landing area.

Once it decides on an endpoint, it pushes itself by thrusting its body up and away from the tree, sucking in its stomach, flaring out its ribs to turn its body in a “pseudo concave wing” all the while making a repeated serpentine motion of lateral undulation parallel to the ground to stabilize its direction in midair in order to land safe and sound.

The mixture of sucking in its stomach and making a motion of lateral undulation in the air makes it viable for the snake to glide in the air, where it also copes to keep energy compared to travel on the ground and dodge terrestrial bounded predators. The concave wing that a snake generates in sucking its stomach flattens its body to up to double its width from back of the head to the anal vent, which is adjacent to the end of the snake’s tail, causes the cross-section of the snake’s body to look like the cross-section of a Frisbee or flying disc.

When a flying disc spins in the air, the designed cross-sectional concavity causes intensified air pressure under the center of the disc, causing lift for the disc to fly. A snake incessantly moves in lateral undulation to generate the identical effect of increased air pressure underneath its arched body to glide.

It’d be interesting to know that flying snakes are capable to glide better than flying squirrels and other gliding animals, notwithstanding the lack of limbs, wings, or any other wing-like projections, gliding through the forest and jungle it inhabits with the distance being as great as 100 m. In the recent research conducted by the University of Chicago, the snake ability to glide has been an object of interest for physicists, and they found a correlation between size and gliding ability, in which smaller flying snakes were able to glide longer distance horizontally.

So far there’re five recognized species of flying snake, found them India to the Indonesian archipelago. Some of them are Golden Tree Snake (Ornate Flying Snake), the largest flying snake having 4ft in length, with different color variations. Due to its smaller size, it’s gliding ability is weak. The other is the Paradise tree snake, which is a flying snake that reaches up to 3ft  in length and is famous in the European pet trade. 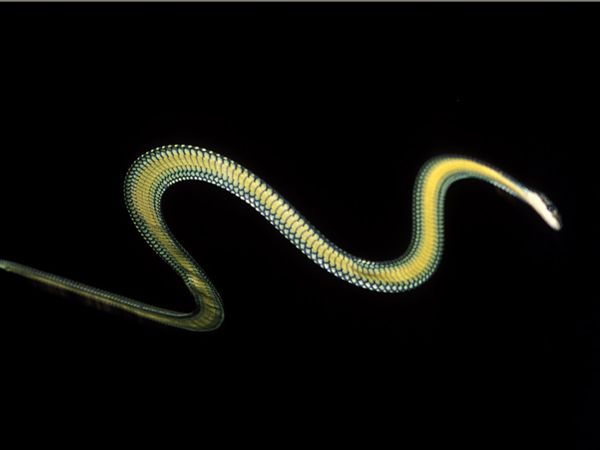 The most famous coloration bodies are black, covered in rich green scales, clusters of red, orange and yellow-colored scales in the shape of flower petals line the dorsal area from the base of the neck to the tail. Its gliding ability is considered one of the best among the flying snakes. Twin-barred tree snake also called a banded flying snake, is the smallest flying snake reaching up to 2ft in length, with the base color is black or dark grey, and the entire body is covered with thick red and thin yellow with black bands. it does not glide. 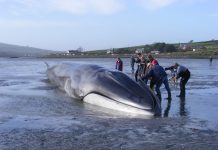 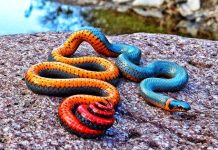 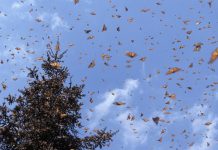