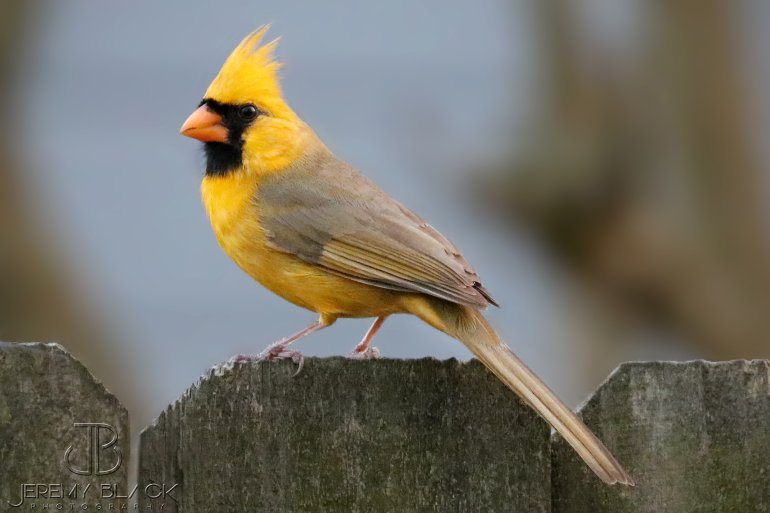 Home Nature Birds Yellow Cardinal One in a Million Bird

Jeremy Black, an Alabama wedding and wildlife photographer, spent almost five hours in a friend’s back yard in the optimism of capturing an image of what he called “the most captivating cardinal in Alabaster, Alabama.” The northern cardinal that Black ended up photographing was not the usual deep red of males but dazzlingly yellow. It could easily claim to be the most captivating bird in the nation.

The yellow cardinal “Gubernatrix cristata” is a species of bird in the family Thraupidae. It is the only member of its genus, Gubernatrix. The term “yellow cardinal” or “yellow morph” may also describe a northern cardinal which is yellow because it lacks the usual enzyme which converts yellow pigments in food to the red pigments in the feathers of most of its species. Sightings are rare.

Black’s photo, which was shared on the Facebook page of the Naturalist’s Notebook, promptly went viral.  As soon as it landed, I was star-struck, took my breath away a little bit. Initially, I thought it was a species of yellow bird she had never seen before.

Then he realized that the creature, with its a black mask and crested head, looked just like a cardinal just one of a different color. This coloration is not unique, but it is aberrant, according to a 2003 research paper on what at the time was said to be the first-ever reported yellow northern cardinal in the United States.

Researchers who studied its feathers concluded that the bird had a genetic mutation that impaired the metabolic processes that normally make red feathers out of the carotenoid-rich yellow and orange foods in a male cardinal’s diet.

one in a million mutation, had never seen a live yellow cardinal in 40 years of bird-watching. Rare though they are yellow northern cardinals seem a bit more common with the advent of digital cameras and social media. A pair was spotted in Kentucky in 2011.

It is estimated that in any given year there are two or three yellow cardinals at backyard feeding stations somewhere in the U.S. or Canada. There are probably a million bird feeding stations in that area so very roughly; yellow cardinals are a one in a million mutation. A typical male northern cardinal’s feathers turn red from pigments in the foods it eats. Northern Cardinal Bird Meaning – A bird representative of a loved one who has passed away. Therefore, when you want to see him, it means they are visiting your door very soon.