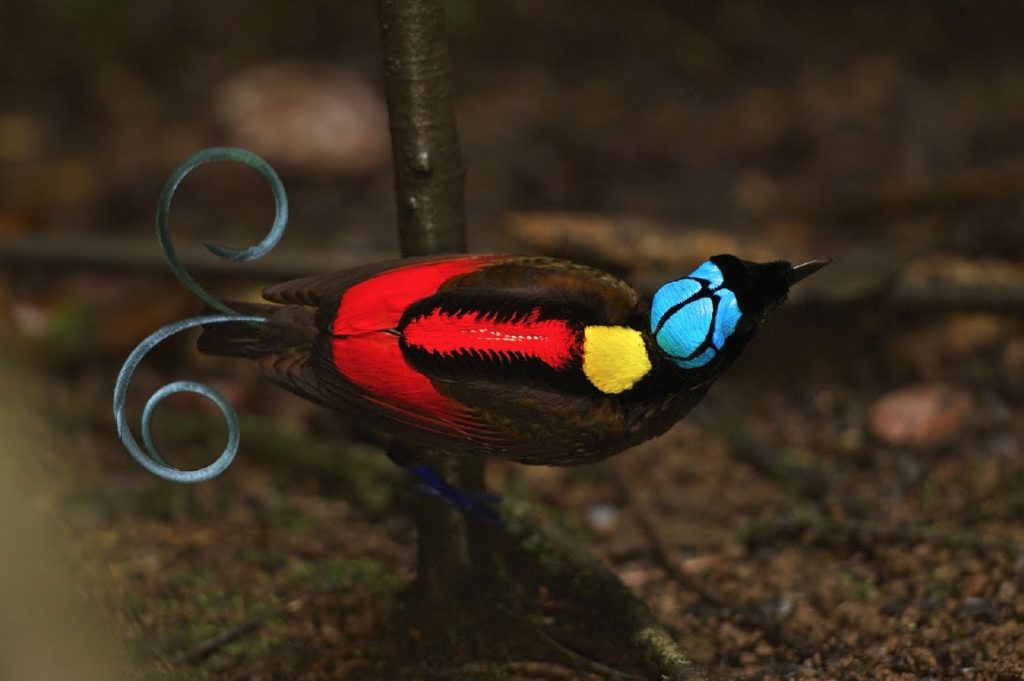 The Wilson Bird of Paradise (cicinnurus respublica) is a species of passerine bird belongs to Paradisaeidae family. The bird lives on the hill and lowland rainforests of Waigeo and Batanta islands in West Papua Indonesia. Where it reported to be frequent in suitable habitat. The exotic bird has the unique outlook with striking scarlet, yellow, green and blue plumage. Specially, the turquoise dome of Wilson’ bird of paradise is hairless.

Its just bare skin and two long curved tail feathers also play a vital role in helping the males attract partners. The male bird looks more colorful as compare to females, which has light brown plumage with dark blue dome. The male bird entice to female by clean the leaves or debris to make they’re own stages in forest. Wilson’s bird-of-paradise is small, up to 21 cm long, can reach 6.3 inches in length and 1.8 to 2.2 ounces of weight.

The blue bare skin on the crown of the bird’s head is so vivid . That it is clearly visible by night. The deep scarlet back and velvet green breast are lush, the curlicue tail gleaming bright silver. The bird mating season of Wilson’s bird of paradise takes place two times per year: from May to June and in October.

The Wilson Bird of Paradise habitually passing from branch to branch on the flat ground by bending. they’re body in different postures, spreading the colorful iridescent plumage and chirping. The male bird shake head lean neck or turn up tail and open they’re mouths in front of female to entice they’re partner.

The Wilson Bird of Paradise is discovered in 1850. When it’s courtship dance was recorded by the famous naturalist David Attenborough in the wild. The Wilson’s bird-of-paradise diet is consists mainly of fruits, small insects and arthropods. The name “Wilson’s bird of paradise” is coined by Napoleon’s nephew. Who described unidentified bird that was purchased by British naturalist Edward Wilson.

Moreover, this is a poorly known species and no population estimates are available. Due to continue habitat loss, this species occurs within a very small range. It is likely to have a moderately small population. The bird is evaluated as Near Threatened on the IUCN Red List of Threatened Species.

The rate of decline is not thought to be more rapid as this species apparently persists in selectively logged forest. Hunting for skins may also contribute to the decline. The BBC cameraman David Attenborough first time filmed his unusual behavior in 1996. It was dropping leaves on the forest floor, which irritated the bird into clearing them away. With the impressive colorful plumage, Wilson’s bird of paradise is considered the world’s most beautiful bird.