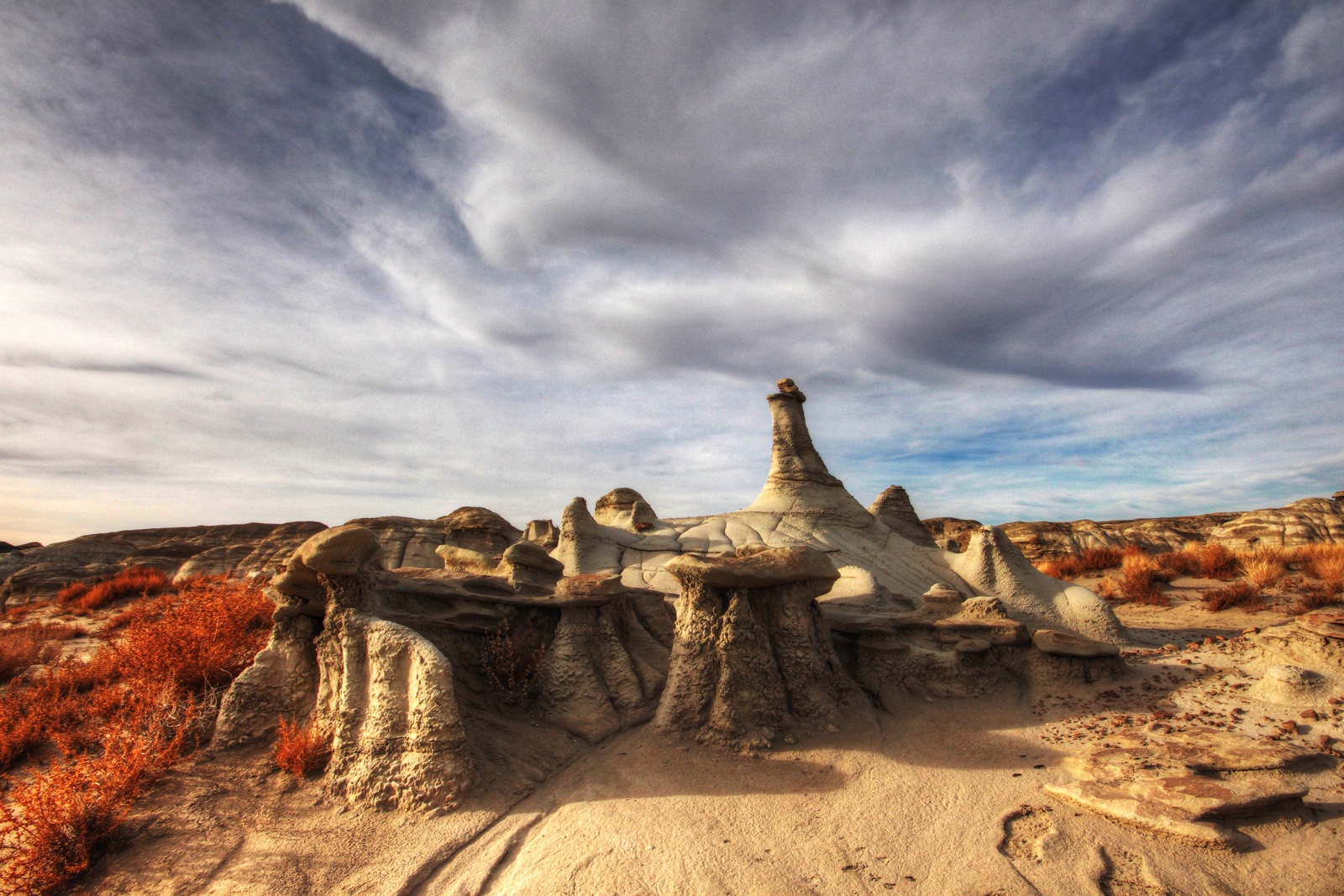 The Bisti Badlands New Mexico, which is also called Bisti/De-Na-Zin Wilderness. This is a massive rolling landscape of phantasmagoric formations of earth and stone. It is situated in northwestern New Mexico’s high desert lands. Bisti is resulting from the Navajo word “Bistahi” which means “among the adobe formations.” De-Na-Zin takes its name from another Navajo word for “cranes.”

In this beautiful landscape here wind and water erosion over a long time. The area has carved an imaginary world of bizarre rock formations and hoodoos in the form of pinnacles, spires, mushrooms. Other rare forms that have fascinated names such as “Cracked Eggs”, “Bisti Wings” and “Rock Garden”.

This is an untouched area so far and very least visited and mostly unknown. It was once an ancient riverine delta on the shores of an ancient sea, somewhere 70 million years ago. As the time passes the water gradually receded, lush foliage grew along the numerous riverbanks and several prehistoric animals wandered the area.

Therefore, when the water disappeared completely. It left behind layers of jumbled sandstone, shale, mudstone, and coal. However, an abundance of the coal burned away in ancient fires that lasted centuries. Moreover, erosion then formed the characteristic features of the contemporary landscape of the Bisti Wilderness.

Furthermore 6,000 years ago, when the last ice age retreated. The waters of the melting glaciers assisted uncover fossils and petrified wood, as well as eroding the rock into the hoodoos now observable. Mostly three kinds of formations are bare in Bisti Wilderness area.

The Ojo Alamo Formation, which has left naked the thick deposit of volcanic ash from an ancient eruption, and Fruitland formation and the Kirtland Shale. Here are recreational activities in the Bisti/De-Na-Zin Wilderness includes hiking, camping, wildlife viewing, photography, and horseback riding. Make sure, campfires are forbidden in the Wilderness.

The Ojo Alamo Formation extents the Mesozoic/Cenozoic boundary, and typically contains dinosaur remnants. Thus, the Fruitland Formation comprises layers of sandstone, coal, and shale. That was laid down when the surroundings were marshy, humid and warm, with meager drainage.

Several of the gray hoodoos in the wilderness is made up of this formation. The exclusive egg-shaped formation, in the “egg factory” area, is also the result of erosion. Consequently, the cracks are the result of differential weathering conditions, whereas the speckled appearance due to mineral deposits in the stream that cut through the sedimentary rock.

The Bisti Badlands New Mexico is an amazingly scenic and colorful expanse of undulating mounds and unusual eroded rocks covering 45,000 acres, hidden away in the high desert even less publicized. The badlands are administered by the BLM (Bureau of Land Management). The area is free to enter, and are known officially, but less evocatively as the Bisti Badlands New Mexico Wilderness Area.