This Taiwanese mystery bird lives on the sides of mountains and engages in a migration. That is not triggered by season what triggers its movements and where does it go. The White-whiskered bill is thrush like and yellowish to horn colored. The White-whiskered Laughingthrush eyes are black and legs are strong and brownish pink.

The white-whiskered body weight is approximately 77 grams. This beautiful bird didn’t afraid of humans as it is very sociable species that often seen in large groups. The bird is very friendly and approachable; often moving about foraging for berries in pairs or small parties. It has a nice range of calls, some very loud.

The White-whiskered Laughingthrush enter open areas by roadsides and in forest clearings. It is more abundant in mixed coniferous forest than in grassland, pine woodland, or spruce forest; along with Taiwan fulvetta (Fulvetta formosana) and Taiwan yuhina (Yuhina brunneiceps). The bird is habitually a dominant species in a ground omnivore. This species pairs are monogamous and stay together even in non-breeding periods.

The White-whiskered Laughingthrush feature is the double white stripes, one sub-moustachial the other a supercilium. Because of his lovely features give it the local name of ‘four eye-browed thrush’. The head, breast and mantel have a pleasant scaly appearance.

There is a lovely ‘olive-gold wing panel’ The White-whiskered Laughingthrush is a common species in Taiwan. The bird population is falling between 10,000 and 100,000 breeding pairs. However, the bird’s population is decreasing because of habitat destruction and fragmentation. Hence it is not considered a vulnerable species. 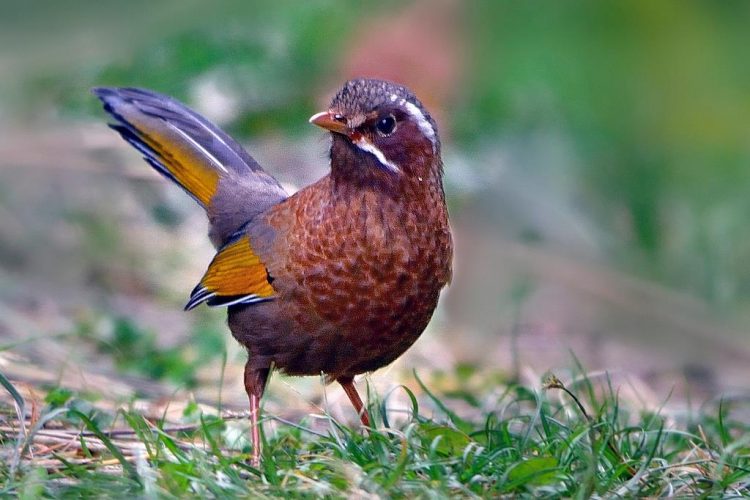 Also See: The Facts and Information of Golden Pheasant

Exquisite Motion of Birds in Mid-Flight

The Facts and Information of Golden Pheasant