The migratory White throat bird is also called greater white throat “Curruca communis” is a typical warbler that breeds throughout Europe and across Western Asia. The common white throat is mostly found in open cultivation, with bushes for nesting. It is insectivorous; prefer to eat berries and other fruits. They build the nest at low shrub and brambles. The clutch contains 3 to 7 eggs like other warblers.
Advertisement

White throat is 13-15 cm in length. It has brownish upper parts; pale underparts, whiter on throat; wing coverts, tertials, and secondaries with buff edges; legs and bill pale gray. The breeding male is with gray head; non-breeding male, female, and juvenile with a brownish head. The wing is 66-77 mm.

There are four types of age that can be recognized: Juvenile with fresh plumage; iris grayish (a useful character during all the autumn). The first year autumn with moult limit on the wing between moulted greater coverts, with dark buff edges, and juvenile retained, with paler buff edges (without moult limit if all greater coverts have been moulted or all are unmoulted).

The post-breeding moult often finished in late September. However, some birds suspend their moult before migration to be finished in wintering quarters, so can have old and fresh flight feathers on passage. Partial post-juvenile moult is including body feathers, lesser and median coverts. Some or all the greater coverts and sometimes tertials and tail feathers; frequently finished in September. Both types of age have a pre-breeding moult which can be complete in some 2nd-year birds and moult all wing coverts and most of the flight feathers in adults.

In the spring male with a gray head lesser wing-coverts with the gray centers; and breast is with a pinkish tinge; the iris bright orange. The female bird is without gray on the head; lesser coverts brown or gray-brown; breast without pink tinge; iris yellow-brown to olive-brown.

It is mainly a summer visitor, widely distributed throughout the mountainous areas of the Aragon Region. Therefore, it is widespread on passage. 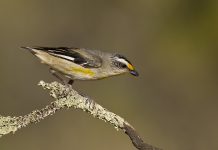