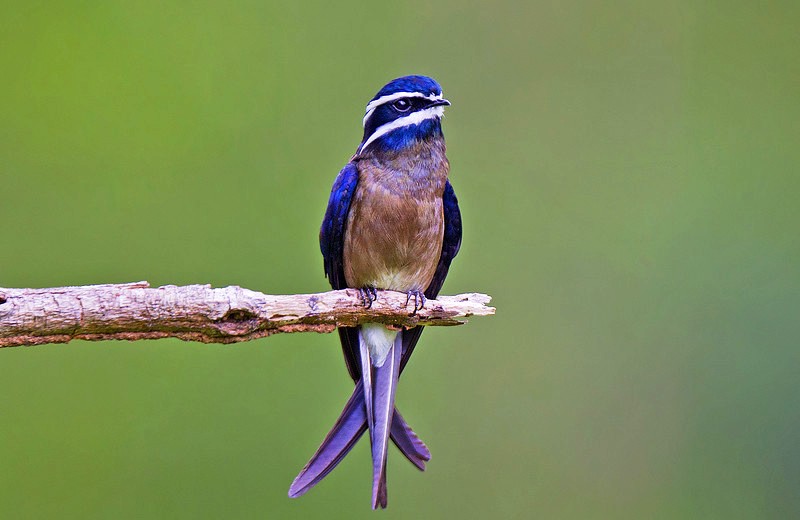 The Whiskered Treeswift (Hemiprocne comata) is a species of bird in the family Hemiprocnidae. The Whiskered Treeswift is found in Brunei, Malaysia, Singapore, Indonesia, Myanmar, Philippines, and Thailand. The adult male has a dark bronze-brown body with a white belly, flanks and under tail-coverts, long wings and deep blue forked tail, and tertial flight feathers are white. In addition, the underwing shows blue coverts and white tertial flight feathers. The head is blue to glossy black and slightly crested.

Moreover, two conspicuous white parallel stripes formed by bold supercilium from forehead to hind nape, and a second stripe from chin back to neck side. Therefore, the female bird is much like the same, but she has deep blue-green ear-coverts. Thus, the juvenile has finely barred brown, gray, and white plumage. The Whiskered Treeswift feeds mainly on insects and small flying arthropods.

The whiskered treeswift has a very large range and hence does not reach the thresholds for Vulnerable under the range size criterion, with a declining or fluctuating range size, habitat extent, quality, or population size and a few locations or severe fragmentation. In spite of the fact that the population trend appears to be declining, the decline is not believed to be adequately rapid to approach the thresholds for Vulnerable under the population trend criterion.

The Whiskered Treeswift is quieter than the largest species of this family. Hence, the contact call between pair-members includes high-pitched “chew” or “kweeo”, and series of short notes “kwee kwee, kwi-kwi-kwi-kwi” or “she-she-she-SHEW-she”. The bird calls are uttered while the birds are flying or perched.

The Whiskered Treeswift feeds mainly on insects, hunts from perches where it sits in an upright posture, and from where it can have a good all-round vision of the surroundings. The bird is very nimble in flight; it chases insects and small flying arthropods, even amongst the foliage but well below the canopy. The preys are habitually taken on the wing, but it also picks off the food items when perched, or by hanging from the tip of a small branch. Thus, it may perform short sallies from its perch, close to the surface of the vegetation.

The courtship displays are poorly identified, but noisy soaring has been observed, at least for the largest species. The breeding season occurs between February and August. The breeding pair is territorial during the breeding season, remains in its nesting territory all year round. The Whiskered Treeswift is very alert and manoeuvrable in flight. The narrow, curved wings and the long tail streamers are very typical of fast fliers.

The specie’s nest is naturally situated between 8 and 40 meters above the ground, on the upper surface of a thin branch, and looks like a part of this branch. Both males and females build the nest, a small half-saucer. The rim is made with saliva into which feathers are embedded, and a few twigs too. So, supplies can be added during the incubation.

The bird usually builds a very small nest, a shallow structure letting only a single egg, standing right as in an egg cup. The thin, papery walls are unable to support an adult or a large chick. That causes the incubating adult to squat on the branch in its place on the nest itself. Only the belly touches the egg. The female lays a single white egg, and both adults incubate and rear the chick.

The incubation lasts about three weeks, but the chick leaves the nest very soon, within one week after hatching. The chick is fed by regurgitation from the adult’s throat into the open mouth, but later, the young take the food from the parent’s mouth. The juvenile plumage is cryptic for better camouflage, required most likely 50 days for complete development.