Wave Rock is a strange natural rock formation located east of the small town of Hyden in Western Australia. Wave Rock name derives from the fact that it is shaped like a tall breaking ocean wave. It is composed of granite and the total outcrop covers several hectares. The wave rock is about 15 meters high and about 110 meters long. Wave Rock is a remarkable example of what geomorphologists call a “flared slope”.

A flared slope is a concave-upward or -inward bedrock surface. That is naturally found around the base of inselbergs, bornhardts, and granitic boulders and also on their higher slopes. Wave Rock is 27 million years old and made up of gray and red granite. The strips are quite a formation aboriginal rock paintings can also be seen at nearby Bates Cave.

The shape of the rock is not caused by a wave phenomenon. Rather its rounded wave-like shape was formed by subsurface chemical weathering followed by removal of the softly weathered granite by fluvial erosion. Therefore, the weathering occurred below ground level before it was exposed. The end result is an undercut base, leaving around the overhang. Further, in spring, water running down the rock during wetter months dissolves minerals adding to the coloring of the wave.
Advertisement

Moreover, the other aspect of Wave Rock not often shown in photographs is the retaining wall about halfway up the rock. This follows the contours and lets rainwater be collected in a storage dam. It was constructed in 1951 by the Public Works Department. Such walls are common on many similar rocks in the Wheat-belt region of Western Australia.

You will find interpretive signage around the rock; enlighten you on the history of the rock and surrounding areas. In the spring, one can find many orchids and other flowers growing around the base of the She-oak trees. 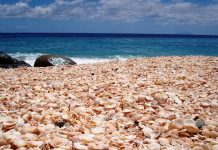