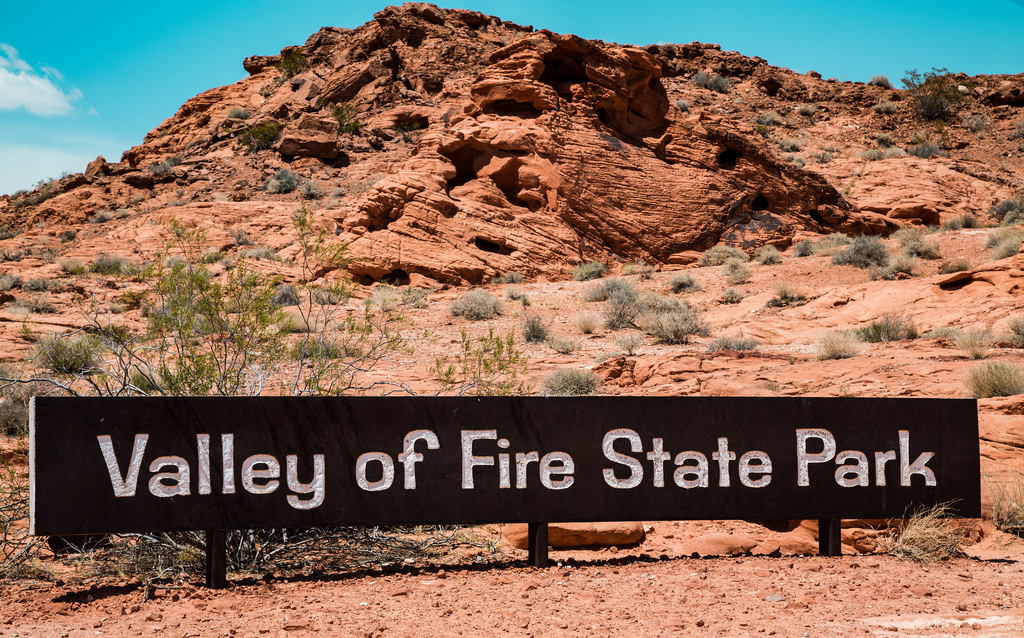 Valley of Fire State Park is a public recreation and nature preservation area. The park is covering approximately 46,000 acres located 26 km south of Overton, Nevada and 50 miles northeast of Las Vegas. The park name derives from red sandstone formations, the Aztec Sandstone. These are formed from shifting sand dunes 150 million years ago. On a sunny day, these rock formations look like they are on fire, giving the park it’s name, the Valley of Fire. This is Nevada’s oldest park, was designated as a National Natural Landmark in 1968.

Complex uplifting and faulting of the region, followed by extensive erosion, have created the present landscape. The rough floor and jagged walls of the park contain brilliant formations of eroded sandstone and sand dunes more then 150 million years old. Other important rock formations include limestones, shales, and conglomerates.

Valley of Fire included the Ancient Pueblo Peoples “Anasazi”, who were farmers from the nearby fertile Moapa Valley. They were mostly involved in hunting, food gathering, and religious ceremonies, although the scarcity of water would have limited there stay. A perfect example of rock art (petroglyphs) left by these ancient peoples can be found at several sites within the park.

In 1931, the Valley of Fire State started to create initiated by Civilian Conservation Corps in 1933. The work lasted into the early 1940s. They built campgrounds, trails, stone, visitor cabins, ramadas, and roads.  However, the Valley of Fire Park was opened in 1934.

The climate of Valley of Fire State Park

The Valley of Fire State Park has a dry and warm climate typical of the Mojave Desert which means it comes with all the weather extremes associated with a desert climate. Winters are mild with daytime temperatures ranging from 12 °C to 24 °C.

The overnight lows in the mid-3-8 °C. Storms moving east from the Pacific Ocean occasionally bring rain during winter months. Daily summer highs usually range from 46 °C may reach near 49 °C. Thunderstorms from the Southwestern Monsoon can produce heavy showers during summer. The best times to visit are spring and fall.

The Valley of Fire State Park can last just an hour or two, only stopping at scenic overlooks and hiking one or two short trails or all day. If you choose to explore every nook and cranny of this place. The main road which leads to Valley of Fire Road and traversing through the park. The 16.9 km section of the road is Nevada Scenic Byway on June 30, 1995. Mouse’s Tank Road is probably one of the most scenics and photographed spots in the park.

Things to do in Park

Driving through the Valley you can enjoy the majestic view of Pink, red, and orange sandstone rocks create amazing vistas that you can see from you’re car. Pink Canyon, also called Pastel Canyon, is a spot that many people don’t seem to know about. It’s an unmarked spot to visit but it’s one of the prettiest places we saw in the Valley of Fire.

The valley of the fire has a visitor’s center plus facilities for picnicking, camping, and hiking.  Petroglyphs are seen throughout the park, with Mouse’s Tank and Atlatl Rock two areas in particular with numerous petroglyphs that are relatively easily accessible. The park also preserves three stone cabins built by the Civilian Conservation Corps. Towards to east entrance an arch rock formation look like an elephant, with a little bit of imagination.

White and red zebra print sandstone creates a great photo opportunity. It’s a 1.5-mile round trip hike out to the Fire Wave. Also, you climb the staircase at Atlatl Rock to see the best display of petroglyphs in the Valley of Fire. As you are in the desert, so bring plenty of water, sunglasses, hats, sunscreen and comfortable shoes. Valley of Fire is a popular filming location for shooting automobile commercials and other commercial photography. It has provided automate setting to film making sites TV shows.

Valley of Fire Plants and Flowers

The Valley of Fire is dominated by creosote bush, burro bush, and brittlebush.  Cactus species such as beaver tail and cholla are also abundant.  The springtime blooms with desert marigold, indigo bush, and desert mallow.  This makes the park look especially spectacular in the spring.

Valley of Fire is teeming with wildlife, but most of the animals that reside in Valley of Fire are nocturnal.  Their are many species of lizards, snakes, coyote, bobcat, kit fox, skunk, jackrabbit, and antelope ground squirrel.  It is always a nice treat to see desert bighorn sheep and you are likely to see sheep in the middle of the day.  The desert tortoise is a rare species and is protected by state law.