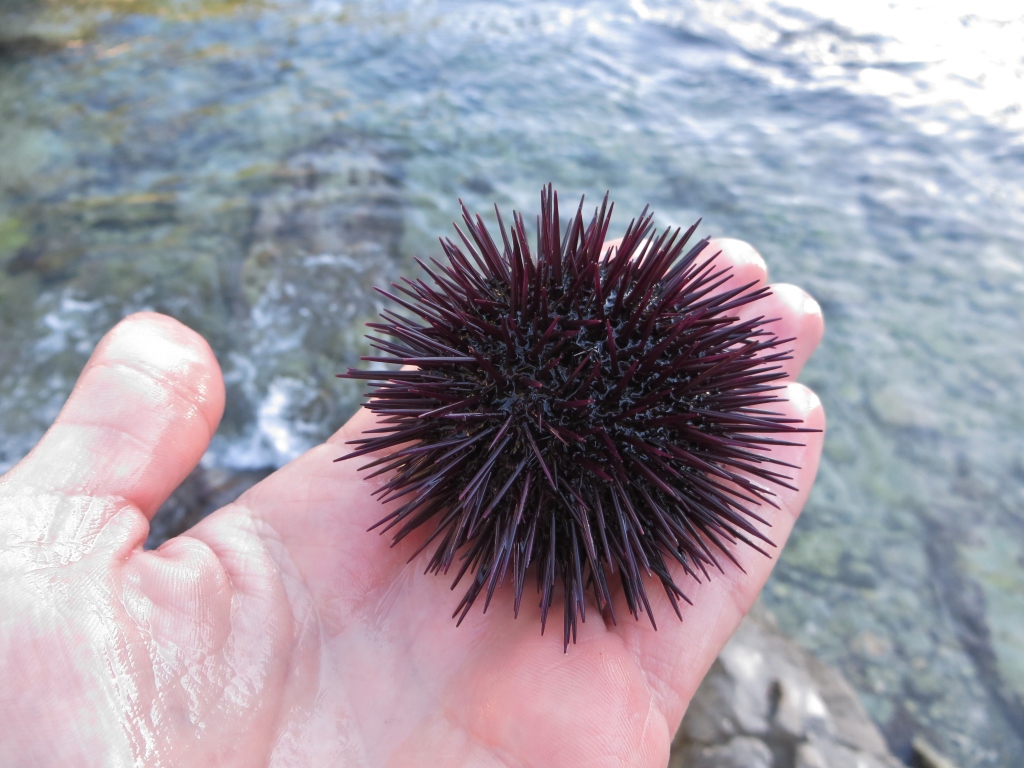 Sea-urchins are not stationary creatures but move around onshore and seabed using their spines and sucker-like tube feet. Some can climb up vertical rocks, and even bore into them. The Sea-urchins belong to a group of marine animals aptly named echinoderms, meaning spiny-skinned. Starfish, brittle-stars, sea-cucumbers, and feather-stars are also members of this group. Many of the sea-urchins around the British coastline live both above and below the low tide mark, either singly or in groups.

Some species, such as the common sea-urchin, green sea-urchin, and edible sea-urchin, live under stones, among seaweeds, or in rock pools and crannies. But the heart-urchin, or sea potato as it is commonly called, burrows in sandy shores. Although the living creatures are often hidden from view. You may frequently find the round, hollow and colorful shells of dead sea-urchin washed up along the strandline.

Spiny test, the shell tests look like an external skeleton. But for the living urchin, it is also an internal one, covered in a thin layer of living tissue. Which contains the digestive and reproductive organs. The test is made up of layers of white limy plates. As the animal grows, it adds more layers each year with layers of pigment in between. You can tell the age of a sea-urchin by counting the number of layers.

The edible sea-urchin, for example, can live for 8 years or more. The edible sea-urchin (Echinus esculentus) is found on rocks and among seaweeds along the English Channel and Western coasts, from the low tide mark to a distance. As with other sea-urchin, its mouth is armed with a set of five sharp teeth. Which is operated by a structure called Aristotle’s lantern? It the named after the Greek philosopher who first described the animal in detail. Aristotle’s lantern may be found intact inside empty tests.

The cutaway contains the gut rising from the center and coiling inside. Five yellow sex organs are visible and are edible hence it’s named. The test is normally 10 cm (4 inches) in diameter and when empty and cleaned is a beautiful mixture of reds and purples, with small white knobs where the spines about 1.5 cm long were attached.
Advertisement

The spines which cover the test soon break off when the animal dies not only to protect the sea urchin against predators but also to help it to feed and to move about. In some species, the spines enable the animal to burrow into sand or bore into rock.

On the move Sea-urchins also have a number of tube feet interspersed among the spines, which they use chiefly for movement and also for respiration and waste disposal. The tube feet make p part of a complex structure known as the water vascular system. Sea-urchins pump fluid through their bodies to help them move about.

The fluid, largely sea-water is pushed through a series of tubes to the tube-feet which then extends. The sucker-like tip of a tube foot grips firmly once it touches a rock or other firm surface. The muscular wall of the foot then contracts, and the water is forced back through the canal system. As the foot shortens, the animal has pulled along. Once attached to a rock, Sea-urchins are difficult to dislodge.

The tube-feet project through holes in the Sea-urchins test, in a characteristic pattern of five double rows running from top to bottom round the body. You can clearly see the tube-feet holes on empty, spine-free tests. The Sea-urchins mouth and teeth are on the underside of its body. The edible Sea-urchins and other rocky shore species. They move slowly over the rocks to graze on the vegetation especially soft young seaweeds.

Sea-urchins common around the British Isles varies in size from five to fifteen cm. Their shapes differ from round to heart-shaped, and the colors alter dramatically from black to bright purple and to the pea-green of the green Sea-urchins. The common Sea-urchins sometimes called the rock-urchin, form groups in or among rocks between the high and low tide marks.

If it cannot find a rock pool or suitable cranny, this urchin makes its own shelter against the waves, wind, and sun by boring into the rock. Its teeth bore deep into the rock, while the spines widen the hole. The much larger edible Sea-urchins live down on rocky shores. It is only uncovered at spring tides when the low watermark reaches its lowest point, but the slightly conical empty test may be found higher up the beach. The tests are a colorful reddish-brown and are often sold as souvenirs.

This Sea-urchin is also known as the heart-urchin because of its fragile heart-shaped test. It differs from other Sea-urchins in that it lives in burrows on sandy shores near the low tide level. Like many animals in this habitat, the sea potato burrows to find somewhere to live and to exploit. It’s a food source in the sand, as well as protecting itself against the drying effects of the sun and wind, or the force of the waves.

A group of spines on the underside near the mouth which are longer and spoon-shaped are specifically for digging down into the sand. A star-shaped depression on the surface shows where a heart-urchin has recently burrowed. Once underground it feeds with the use of special tube feet and collects and grains from the burrow floor. Spines around the mouth then scrape off the food particles.

Like several animals, Sea-urchins do not mate. But shed their eggs and sperm into the sea (groups of sea potatoes gather together to help ensure the maximum numbers of eggs are fertilized). Spawning takes place in spring and the fertilized eggs develop into minute rounded larvae, with four arms that stick out and up. The larvae float among the plankton, later settling on the seabed to transform into adults.

The green sea-urchin is often found under stones or seaweed on the parts of the shore that are covered by the tide lower shore. Green Sea-urchins (Psammechinus miliaris) greenish test up to 4 cm across violet spines 15 mm long. 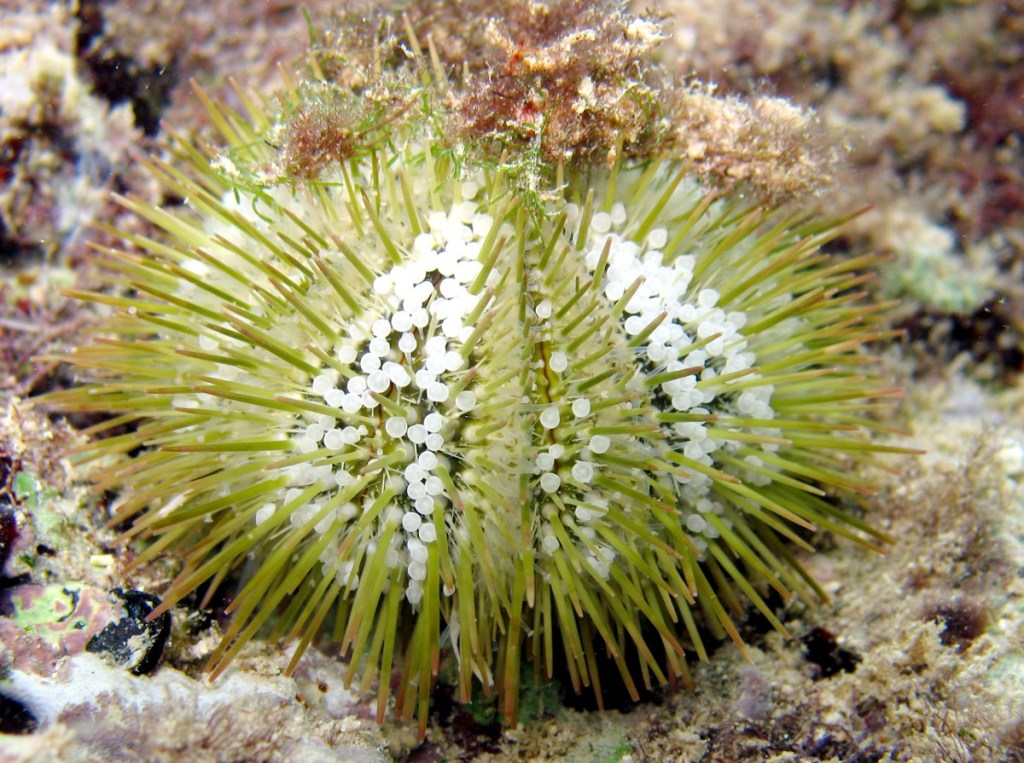