The most familiar White Wagtail with a combination of black crown and throat (or at least breast band).  This wagtail is with white sides of the head, grey or blackish upperparts and white underparts prevent confusion with all but exceedingly localized African Wagtail. The upperpart coloration and facial pattern vary according to race.

But most inhabited by birds with a white forehead and sides of the head. The juveniles are dingier overall and have little black on the head. It has often merely a dark triangle on the breast. So, these may be confused with juvenile Citrine, especially when plumage of head washed pale yellow in fresh plumage. But Citrine has a shorter tail and a different call. The White Wagtail is a small passerine bird mainly found at near water.

Their flight strongly undulating, with tail markedly long, but less so than in Grey. Tail wagged quite readily, especially when nervous. Forms flocks during passage or at winter roosts. Roosts are often in peculiar situations (e.g. trees in Centre of busy cities, sprinklers of filter beds at sewage works, and inside buildings).

As much a town bird as it is a country bird, with a close association with human habitations. However, it is strongly attached to watersides but equally at home well away from water. This is National Bird of Latvia. This bird is being threatened due to a food source and being kept as a pet. But in a recent study shows, that this bird has a signal of vigilance to potential predators.

The White Wagtail is typical flight call a loose ‘tslee-wee’ or ‘tsleevit’ (or other variant), often repeated. It also gives a short ‘tsit’ or ‘chick’, a harsh ‘chizzick’ and a more slurred ‘tzwerp’. The song consists of twittering phrases, interspersed with call notes. This is a slender and active White Wagtail is about 16 to 19cm in length and weight is about 25 g. This beautiful creature has the average life span of 8 to 10 years in the wild.

Taxonomy form personata (Masked Wagtail) is occasionally treated as a full species. It is one of bird, which has been described by Linnaeus in 18th-century work, systema naturae. The white wagtail’s closest genetic relatives are such as the Japanese Wagtail, White-browed Wagtail, and the Mekong Wagtail.

It is considerable. 6 races (nominate, yarrellii, subpersonata and personata illustrated). These may be allocated into four arbitrary groups for identification purposes:

In the summer season, the White Wagtail males have black crown, throat and upper breast, white forehead and sides of the head, pale grey upperparts, and two white wing bars. However, the summer females similar but duller, with dingier grey upperparts and black of nape and grey of mantle merging on lower nape (black more extensive and division cleaner on males).

Moreover, the winter males have chin and upper throat white, leaving black as band on lower throat. The females lack or have very little black on crown and nape. And, have sides of head washed dull grey and are closer to juveniles, but chest band blacker and are less brownish-grey.

Juveniles have most of head dull greyish, with whiter throat and dark grey-brown breast band. The first winter are much as adult females in winter plumage and aging tricky. But young birds have grey of crown and upperparts tinged olive and a creamy-yellow wash on head in fresh plumage. Also, the young males with blacker on the crown than young females, which often lack any. 1st summer birds often duller than full adults, and females may have a grey crown.

Pied Wagtail head pattern as White Wagtails. But in males’ upperparts black or blackish, black of the breast more extensive. Also, the white wing bars often wider but variable and flanks darker grey. The females are dusky-grey above, darker than those of White; especially on the rump.

The winter adults and immatures variable as in White, some difficult to separate from White, but rump always darker, crown usually has some blackish (often lacking in White) and flanks markedly darker.

The Moroccan Wagtail is a very distinctive race. The summer male bird differs from White in having a more complex head pattern. But the mostly black head, throat and upper breast contrast with white forehead.

The supercilium and ear-coverts, white being broken by a black eye-stripe and with an isolated white patch at sides of the neck. Moreover, the female’s bird similar, but black of head duller, more mottled. The winter adults have throat white but retain black chest and show narrow black moustachial line bordering white-centered ear-coverts.

But the juvenile and 1stwinter similar in head pattern to adult winter, but black of head and breast replaced by dark grey and white supercilium borders rear ear-coverts to meet white throat.

The Masked Wagtail is a very distinctive race. Adults have head, neck and breast black, with ‘mask’ formed by the white forehead, lore, eye-ring, and supercilium; white fringes to wing coverts very broad, forming extensive whitish area on the forewing.

Status and Habitat Common (In addition to mapped range, has bred Jan Mayen.) Often associated with human habitation or watersides but may be found in a wide variety of open habitats from seashores to farmland, industrial zones, mountainsides, and (in breeding season) tundra. 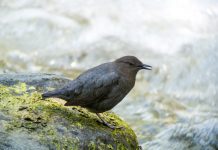 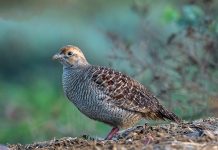 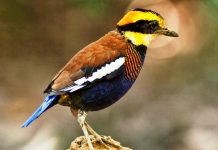 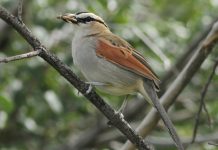 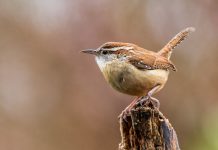 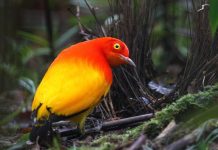