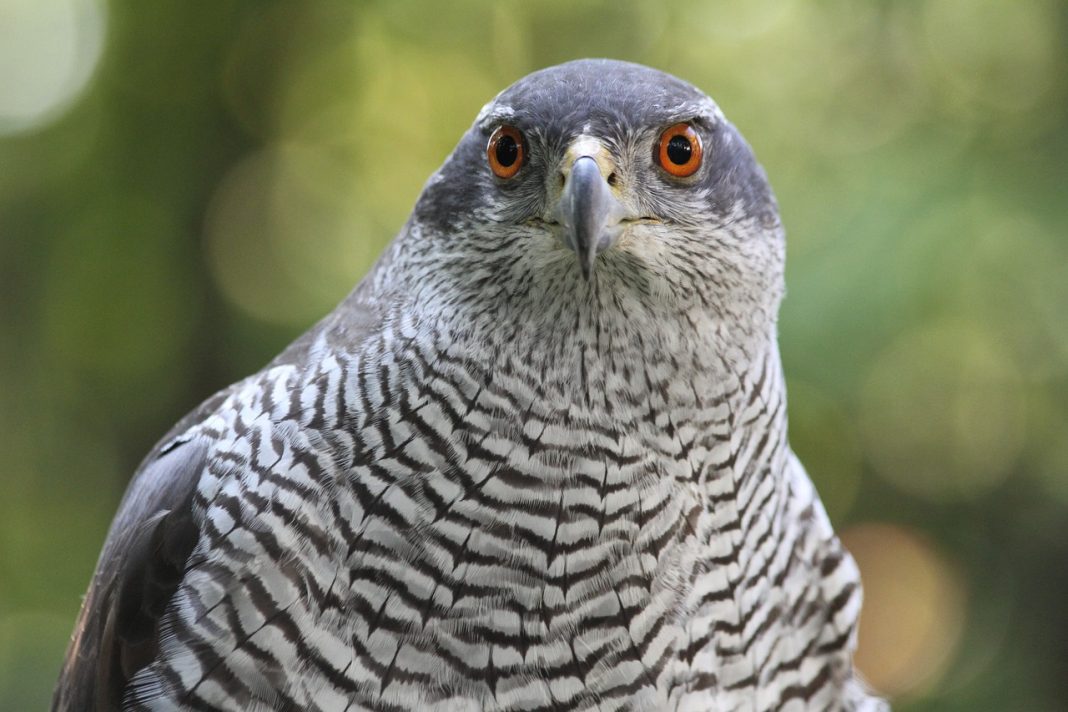 Northern Goshawk “Accipiter gentilis” is about 48–62 cm in length with a wingspan of 95–125 cm. It is much the largest Accipiter but marked size difference between sexes: females average 15–20% larger and 60% heavier than males. The largest females are Common Buzzard-sized, smallest males not much longer than the largest female Eurasian Sparrow-hawks, although still twice as heavy.

The shape, plumage pattern, and flight action are typical of Accipiter. It is a moderately short-winged and long-tailed raptor with barred underparts in adults. (Tail significantly longer than wing is broad.) Inactive flight gives a series of rapid wing beats followed by a glide on flat wings with wings held partly closed. Seldom hunts from concealed perch, launching into swift and impressively agile pursuit low over trees and the open ground when soaring holds wings flat or slightly raised. In-display flight flaps wings slowly.

The adult (particularly male) can be confused with the female Eurasian Sparrow-hawk but has a longer, broader arm and more pointed hand (slightly shorter and narrower also), with a more curved trailing edge (shows pronounced S-curve when gliding), shorter tail with a more rounded, less square-cut tip, more protruding head with the thicker-necked look, and much more vigorous body that looks deeper and broader from breast to belly.

Soars more frequently, and tends to hold its tail more open when soaring. If mobbed by Carrion Crows, male Northern Goshawk almost always looks clearly larger (unlike female Eurasian Sparrow-hawk). The juvenile bird is separated by the same features as an adult, except that it is deficient in a dark hood and conspicuous white undertail coverts while having bolder barring on the underside of flight feathers like Eurasian Sparrow-hawk.

Moreover, drop-like markings on underparts are not found in Eurasian Sparrow-hawk (but see Levant Sparrow-hawk) and neither is pale mottling on greater coverts. At any age, maybe told at a distance from Buteo buzzards by the smaller, more protruding head and bulkier body, broader arm but more pointed wingtips, longer tail, and quite different flight action.

From Gyr Falcon is by much shorter, less pointed hand, broader arm, markedly curved trailing edge to the wing, and broad barring on the long tail. The adult female is substantially larger than the adult male, browner on the upper parts, and has more prominent white undertail coverts. White supercilium contrasts less with browner (less blackish) crown and ear-coverts.

The juvenile bird is dark brown above with broad buff feather edgings: missing solid dark crown and face patch of adult, and supercilium diffuse or lacking; underparts often buff (instead of white), or even washed rufous, with the gloomy drop-like spots replacing barring of adult and dark barring on under-side of wings and upper-side of tail more noticeable (with a broad buffish tip to tail). It has pale mottling on greater coverts.

Northern Goshawk is normally a silent bird, but alarm call near nest a loud, guttural ‘kyeee-kyee-kyee …’. Begging call of female a plaintive, melancholy ‘wheee-oh’. Both are louder, harsher, and deeper than in Eurasian Sparrow-hawk.

Northern Goshawk is moderate and clinal, with largest and palest (most blue-grey) populations in north and east, smallest and darkest in south and west. It has four races including vagrant atricapillus from North America (nominate race illustrated).

However, the adults of both buteoides (breeding northeasternmost of Europe eastwards) and North American race atricapillus is a little paler and more blue-gray above and paler-looking below due to finer barring. Whereas the juvenile buteoides are less heavily streaked below than nominate race and have more extensive pale buffy marbling on wing coverts, with pale markings also on upper tail coverts.

Northern Goshawk is uncommon but can be found in forests and extensive woodlands (particularly coniferous), large clearings, and adjacent open country.