The lesser goldfinch (Spinus psaltria) is a very small songbird of United States. The bird has crown, nape, back and upper tail converts a uniform greenish grey to olive green in color. The bird displayed black primaries and secondaries with two indistinct buff white wing-bars. The tail is black except for two distinctive white crescents on the inner webs of the outer rectrices.

These white crescents did not extend to the entire underparts from the base of the bill to the undertail convert a uniform canary yellow tinted with an olive wash on the flanks. The bills and legs are dark pink and iris black. The Lesser Goldfinch diet consists mainly of buds, weed seeds, coffeeberry, sunflower seeds, elder berry, and developing fruits. The bird apparently requires large amount of water to facilitate the ingestion of seeds.

As they are concentrating on the streams and spring. The bird often occurs in flocks at least of six birds and mix with other birds, i.e., American Goldfinches, Lawrence’s, Pine Siskins, House Finches, Lark Sparrows, White-crowned Sparrows, and Western Bluebirds. This petite species may be smallest true finch in the world. The finch is just 3.5 to 4.7 in length and weigh from 8 to 11.5 g.

The nesting season is in summer, lays 3 to 4 bluish white eggs in a cup shape nest made of fine plant materials. The bird nest often found at cottonwoods and willows along rivers, made of rootlets, lichens, and strips of bark, placed in a bush or at low or middle levels in a tree. It is a quick little bird, continuously hovering and jerking its tail while feeding. The male bird also feeds the female bird when she’s on the nest during incubation.

The Lesser Goldfinch is a full year resident from northern South America to the Southwestern United States and most common from the southern Gulf Coast of Texas to California and up the West Coast into Washington.

The species also breeds in northern Texas, Utah, Colorado, and Northern Nevada. Lesser Goldfinch breeds all year round, may be less often in Sep/Oct. This is least concern bird on the ICUN list due to its vast range.

The American goldfinches can be illustrious by the males having a black rarely green forehead, and latter is red or yellow in the European goldfinch and its relatives. However, the North American males are markedly polymorphic, and 5 subspecies are often named; at least 2 of them seem to represent a less-progressed stage in evolution.

The Lesser Goldfinch is a small, social songbird, inhabits a wide variety of habitats. The vocalization of lesser goldfinch and American goldfinch are probably among the longest and most varied of passerine birds.

The vocalization is usually prominent sounds in goldfinch habitats. Hence, listen closely to their wheezy songs, habitually include snippets from the songs of other birds. The lesser goldfinch call includes a plaintive, kittenlike tee-yee, very complex jumble of musical phrases, often mimicking other species. Also Read: The Himalayan Cutia / The fire-tailed myzornis 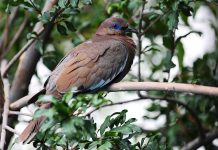 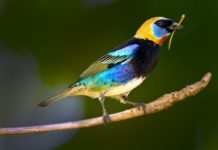