On 9 January 1917, Kaiser Wilhelm II of Germany gave the order for unrestricted submarine warfare to commence on 1 February. An all-out offensive was duly launched by U-boats against Allied shipping in the First World War. For the Allies, locating these unseen killers, which traveled at 8 knots, was a real challenge. The answer lay in the development of underwater listening devices.

The first underwater detectors were so-called ‘passive’ listening devices – simple hydrophones that picked up the sound of a vessel’s engines or of its hull moving through the water.

Early active echo sounders were designed by the Norwegian Einar Berggraf in 1905 and an English meteorologist, Lewis Richardson, soon after the Titanic disaster in 1912, but these were never built. The principle involved emitting a sound wave and analyzing its echo to determine ocean depth or distance from obstacles like icebergs, reefs, or other ships.

The Role of Ultrasound

The foundations of sonar – the acronym stands for ‘SOund Navigation and Ranging’ – were laid in 1915 by the French physicist Paul Langevin and Russian electrical engineer Constantin Chilowski. Working with British scientists, their research concentrated on the use of quartz crystals and pulses of ultrasound.

It was a Canadian physicist, Robert Boyle, who produced a prototype for testing sonar in mid-1917, but it was too late to play a major role against U-boats in the First World War. In 1943 sonar played a key role in securing the Allied victory in the Battle of the Atlantic, enabling surface destroyers to locate U-boats and depth-charge them.

The post-war boom in electronics saw active sonar systems grow more compact, and they have now found a wide of applications, including detecting range shoals of fish, locating wrecks, mapping the ocean floor, or in undersea oil exploration.

A sonar operator is on an American submarine in the Second World War. Operating like him was selected for the task by the submarine crewmen and gained their nickname for their ability to hear enemy vessels.

It is discovered by Pierre and Jacques Curies in 1880. The piezoelectric effect is the ability of certain materials, such as quartz, to produce electricity when subject to mechanical stress.

Conversely, they change shape when an electric field is applied. Paul Langevin and Constantin Chilowski were the first to build an ultrasound device utilizing this effect. So, modern technology developed as time passed. But we cannot neglect the history of Sonar. (Underwater Listening Device). 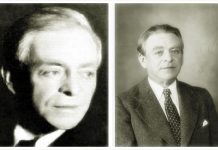