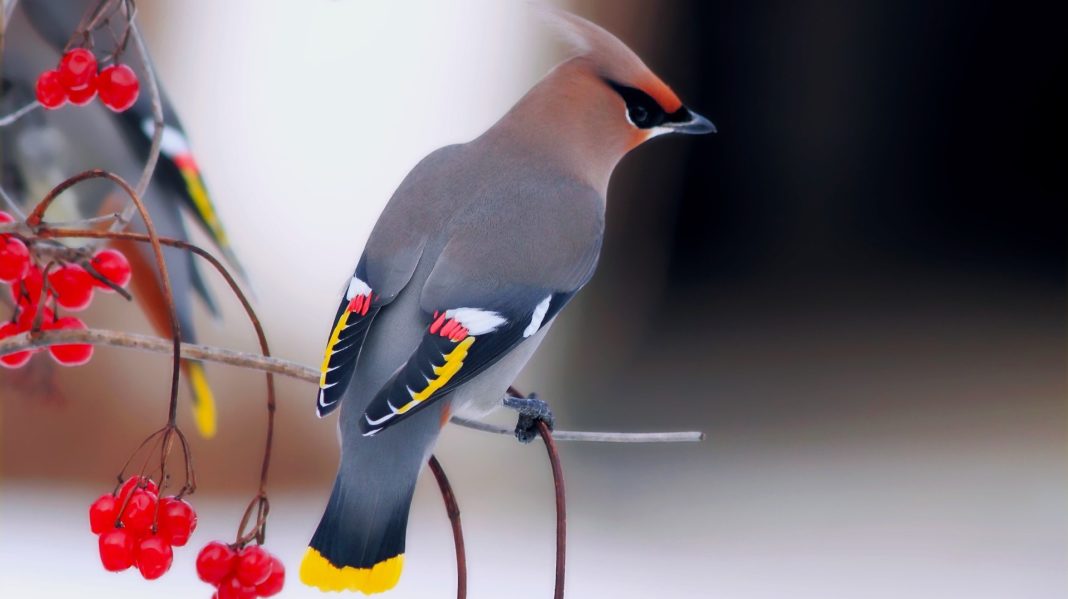 The Bohemian Waxwing got its name for the red waxy tips on mature feathers, and for its bohemian behavior. These beautiful birds are very nomadic when following food sources and their large flocking instinct leads to a communal type of protection and sharing of food. Therefore; with their vibrant colors and sleek appearance, bohemian waxwings are a favorite on any birder’s life list.

Their heads have a Rufous tinge, and their under-tail coverts are Rufous. Adolescents have most of the aforementioned field marks, but are mottled gray-brown and lack the feather tips. Bohemian Waxwings feather tips seem to rise in number and size as the birds age.

The only bird in the Washington United States that could be confused with a Bohemian Waxwing is a Cedar Waxwing, a far more common relative. Cedars birds are smaller and browner than Bohemians and have yellow tinges underneath. But they have lacked the Rufous under-tail coverts and white and yellow wing markings of Bohemian Waxwings.

The beautiful Yellow Tip Tail bird habits include breeds in open areas and edges of boreal forests, habitually in places with sparse tree cover above brushy understory. In the winter season, they can be found in a diversity of habitats, as long as there is fruit available. They habitually congregate in towns with abundant plantings of fruit-bearing trees.

Bohemian Waxwings are monogamous, and both members of the pair help build the nest, which is habitually on a horizontal branch of a spruce tree. Their nest is a loose, open cup made of grass, twigs, and moss, lined with feathers and fine grass.

The female incubates four to six eggs for about fourteen to fifteen days. Normally both parents feed the young bird, which leaves the nest at fourteen to eighteen days. The young normally stay adjacent to the nest and are fed by the parents for another few days. Moreover, family groups may stay together through the fall. The Fruits which are rich in sugar have deficient in other nutrients, so they must be eaten in huge quantities.

Bohemian Waxwing has a big liver which supports him to convert sugar to energy. They can metabolize ethanol formed from the fermentation of those sugary fruits more proficiently than humans, but May still become intoxicated, occasionally fatally. Waxwings habitually drink water or eat snow in winter, since the sugar in their fruit diet tends to dehydrate the birds through an osmotic effect. In the summer, the fruits are juicier and water is less of a problem.

Bohemian Waxwing behavior may be mixed in with other common Cedar Waxwing flocks during the winter. They habitually perch atop trees to forage for fruits and berries. However in summer conditions, they fly out to catch aerial insects, but they’re primarily like fruit-eaters, a trait that dictates much of their behavior. Bohemian Waxwings eat almost nothing but fruit in the winter, relying on the berries of mountain ash, juniper, holly, and others.

They also forage fruit crops and ornamental plantings. Bohemian Waxwings are susceptible to alcohol intoxication, and even death, from eating fermented fruit. Like most songbirds, they feed insects to their young at first but switch to feeding the young berries within a few days.

The bird’s migration is nomadic and irruptive species roams in search of food sources, rather than undertaking a typical migration. However; food availability seems to be a more imperative predictor of winter presence than temperature or latitude. Populations fluctuate considerably from year to year, but Christmas Bird Count Data reveals a slightly declining long-term trend.

Maximum Bohemian Waxwings in Washington are northern breeders that come down into Washington in winter. In many years they’re fairly common in winter in northeastern Washington Ferry, Douglas, Okanogan, Stevens, and Pend Oreille Counties, particularly in cities and towns where they feed on fruit trees.

In a few years, they’d extend further west into the Columbia Basin, and can rarely be seen west of the Cascades. Bohemian Waxwings are erratic breeders in Washington in the North Cascades at Hart’s Pass and Holman Pass. 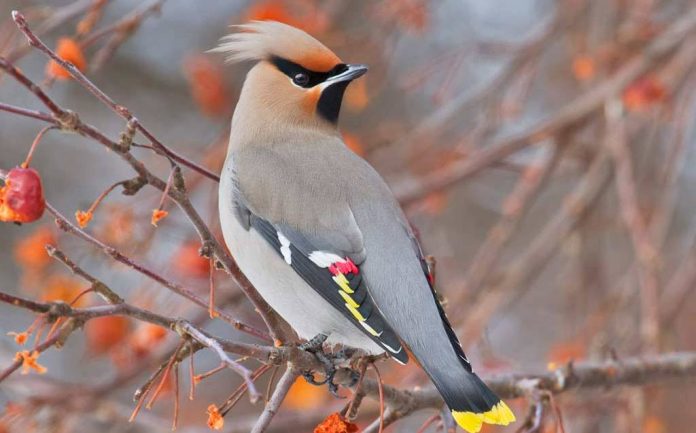 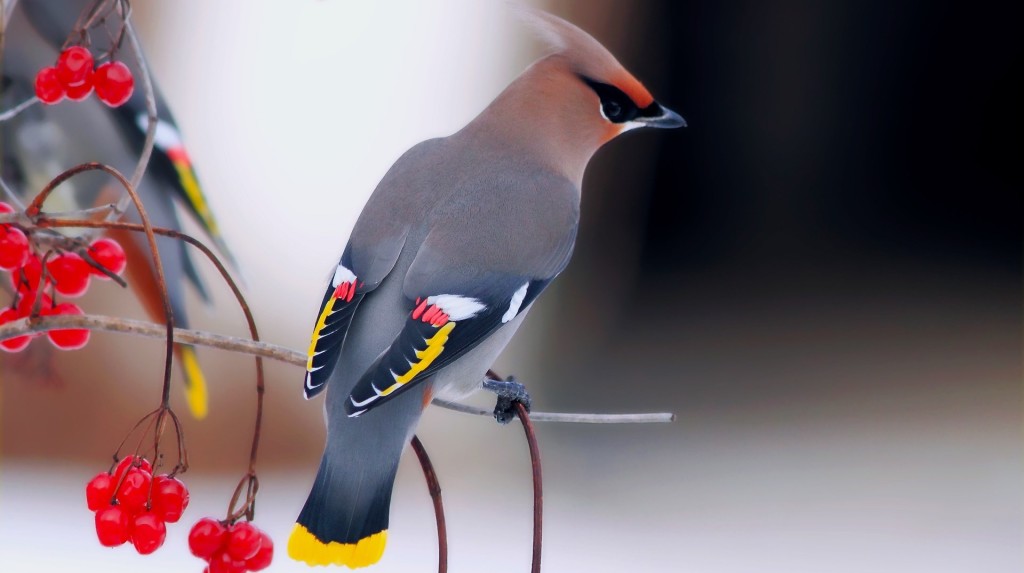 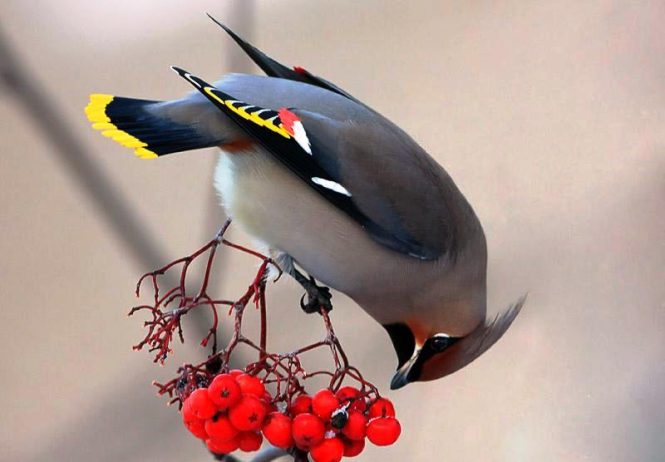 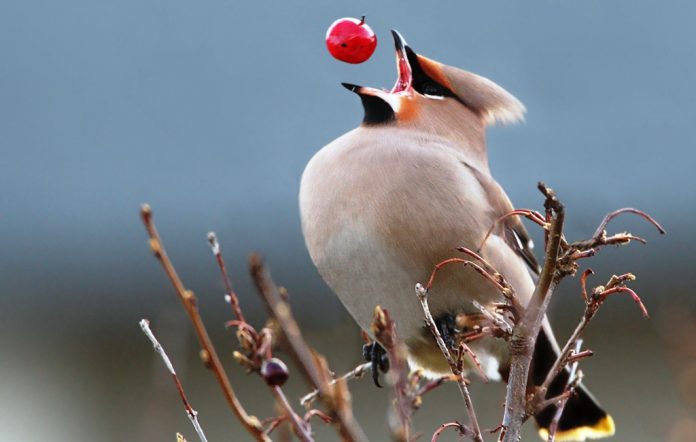 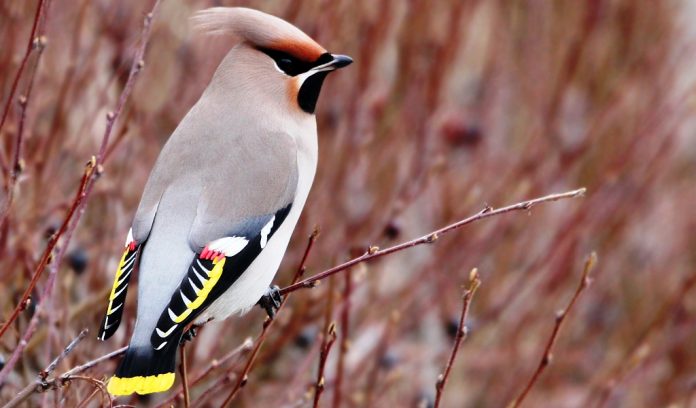 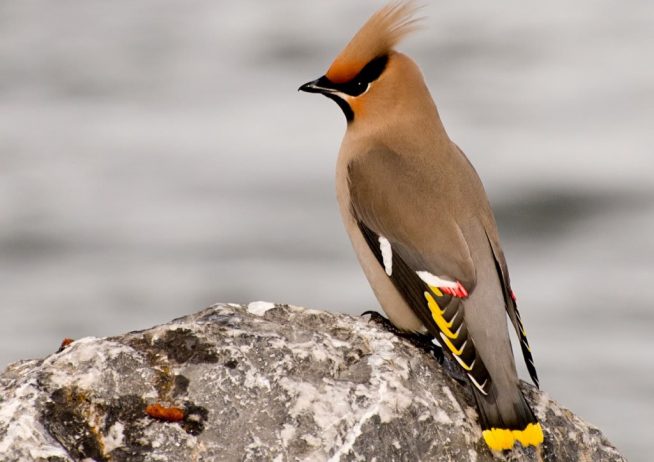 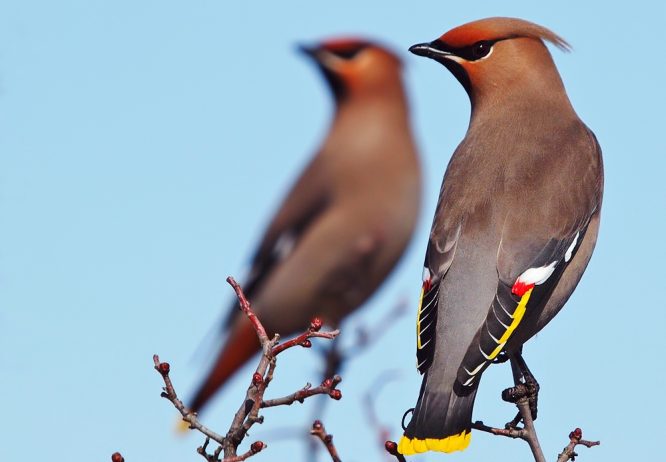 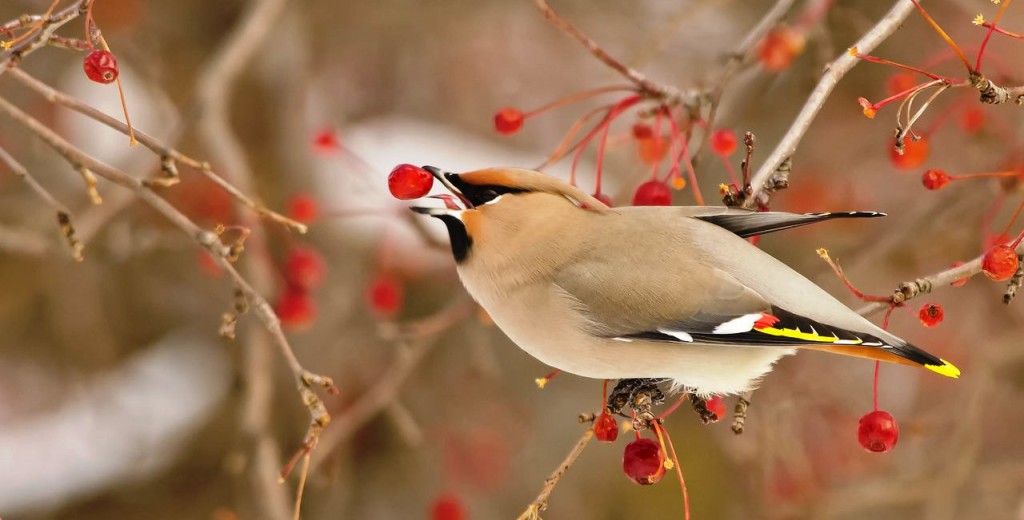 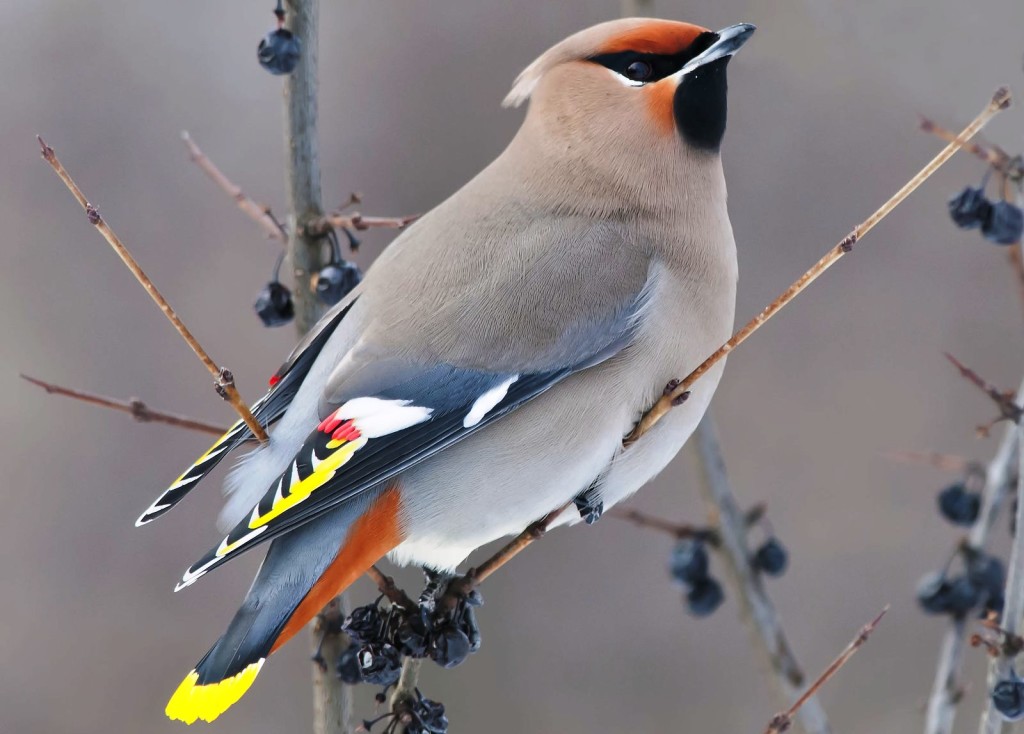 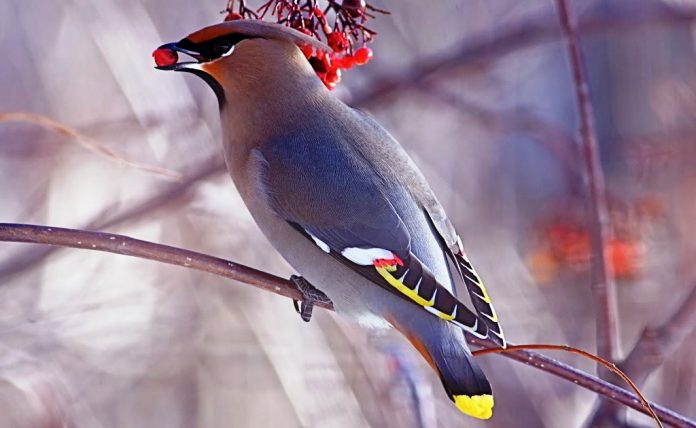 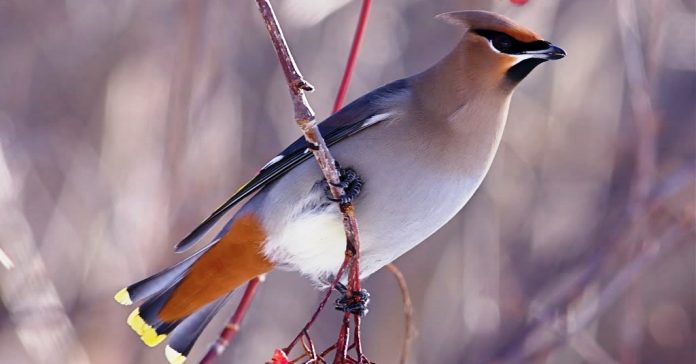 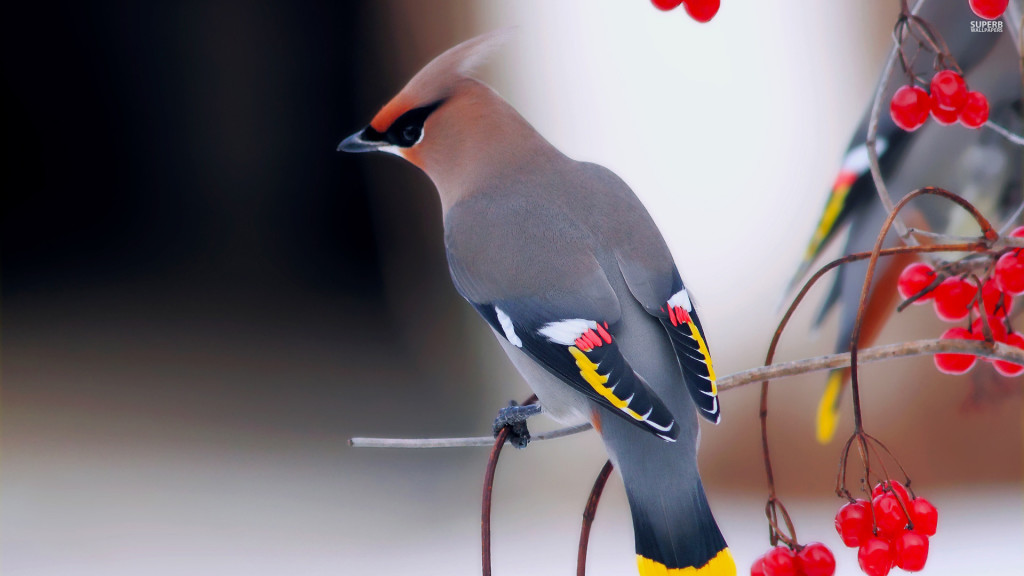 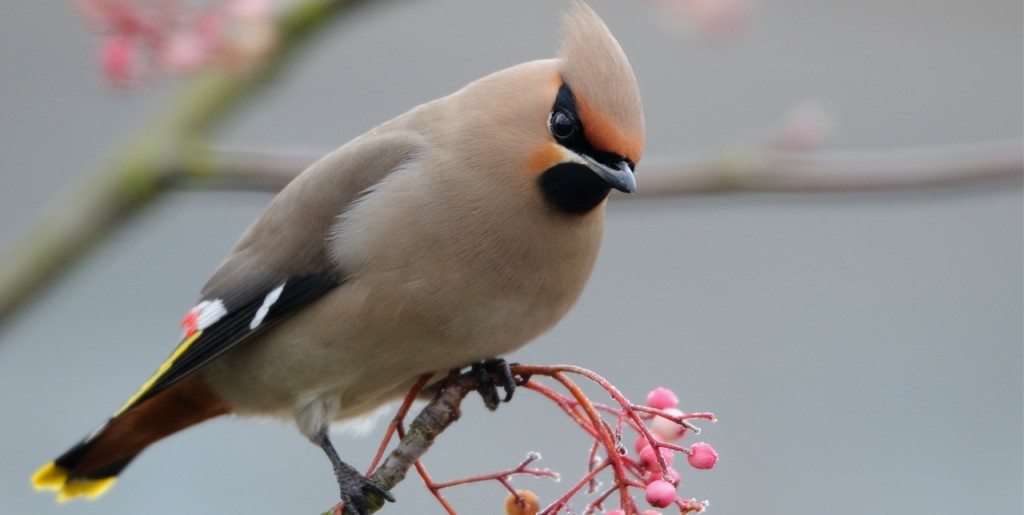 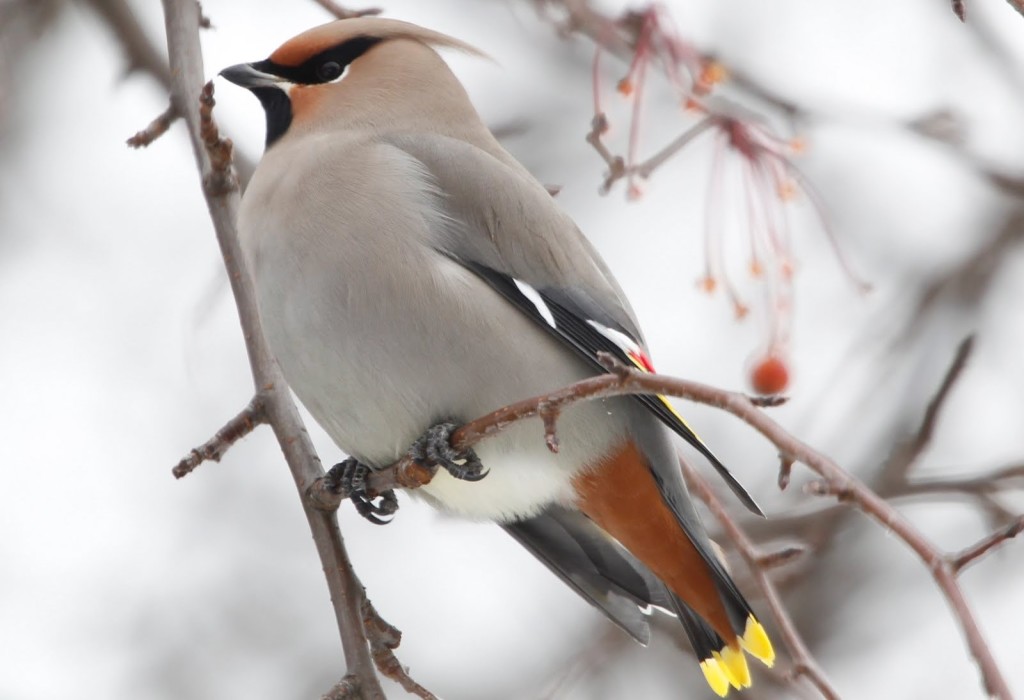 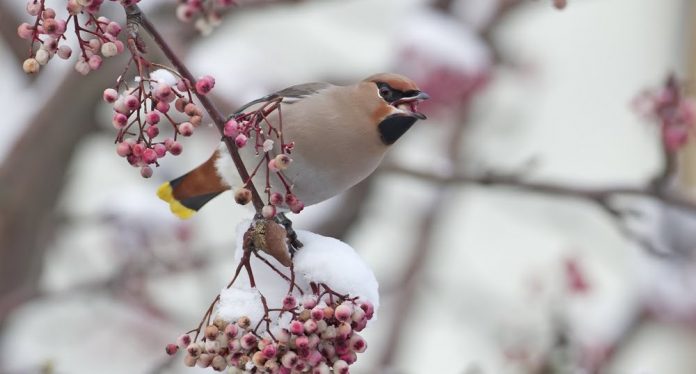 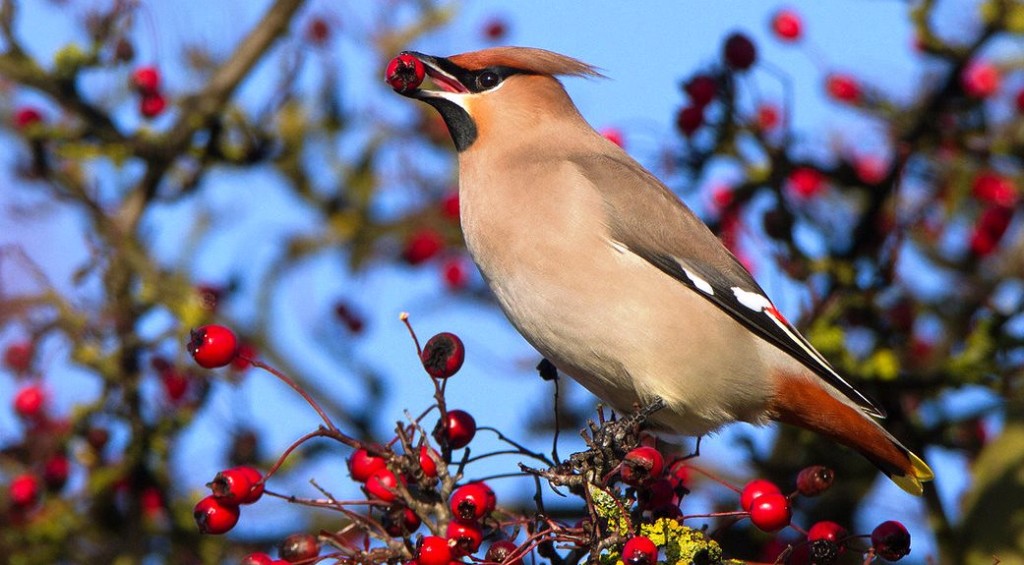 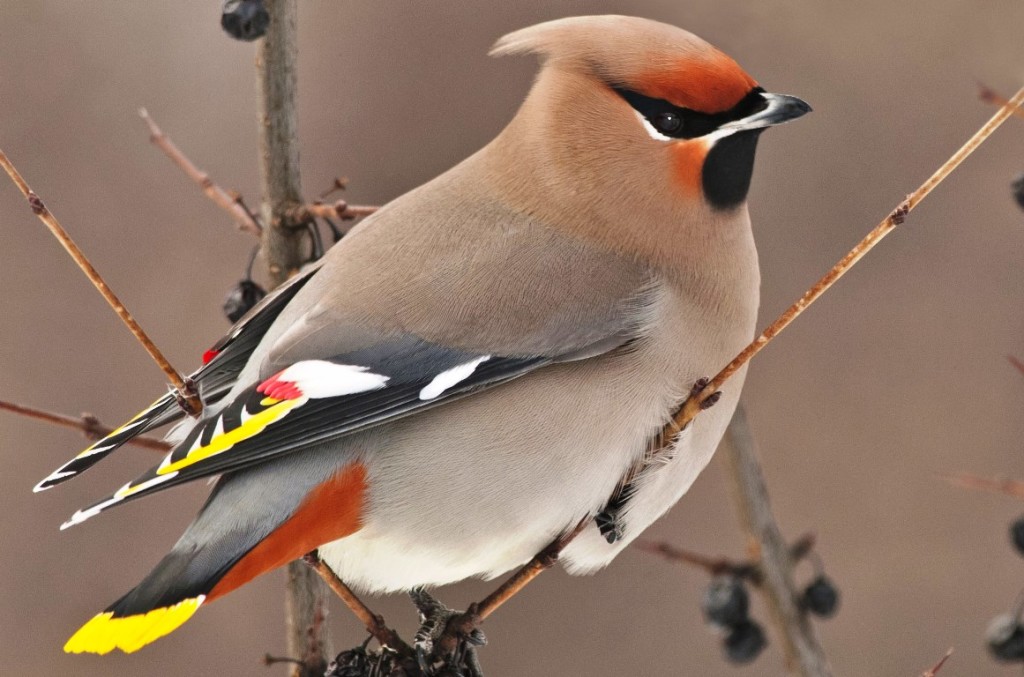 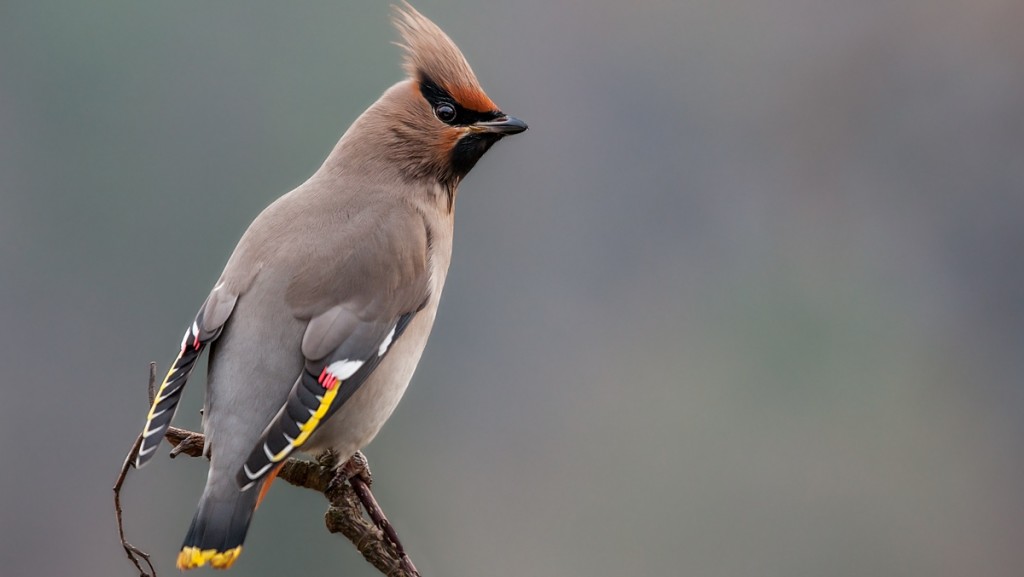 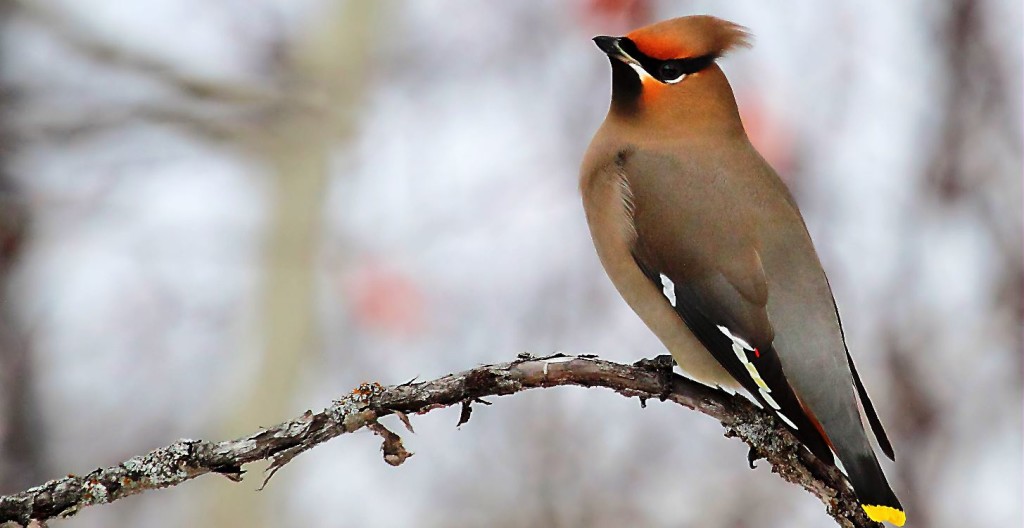