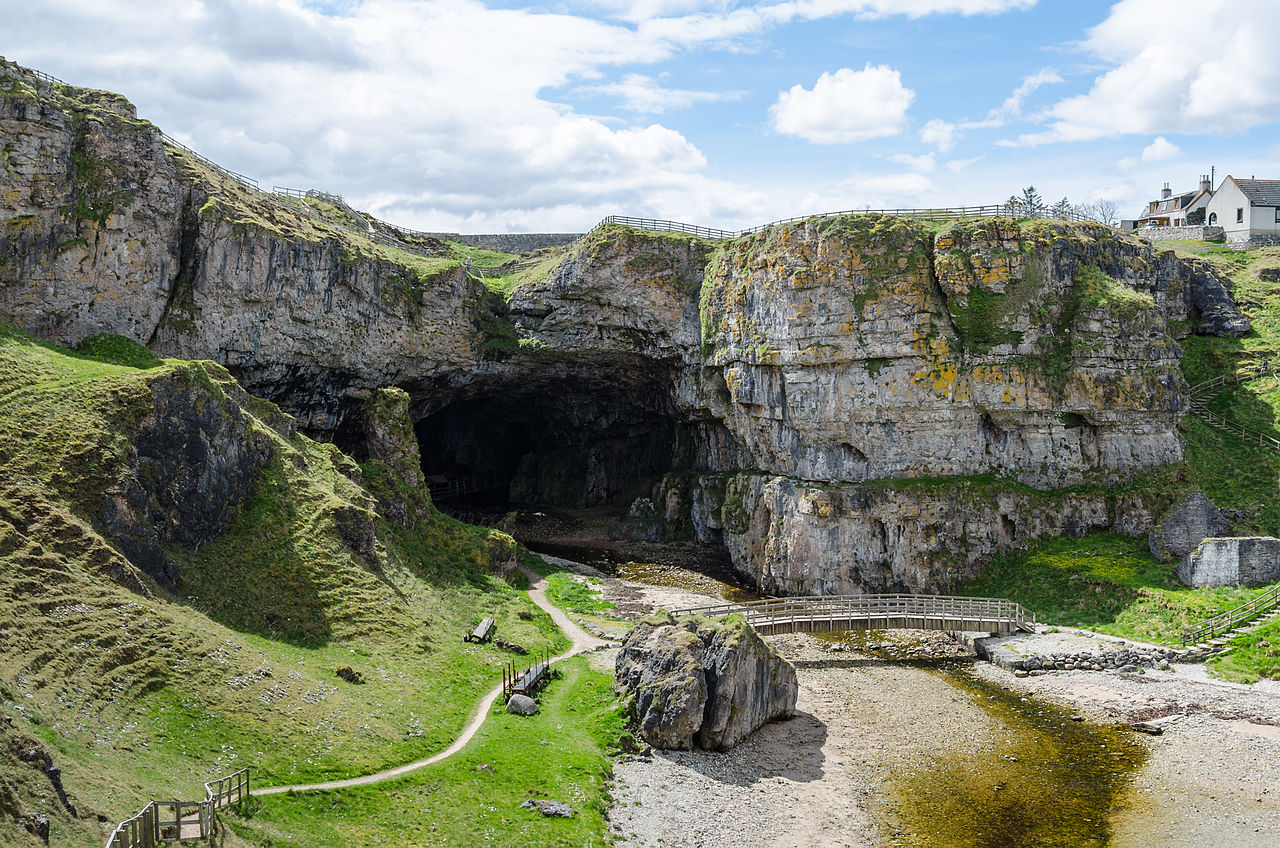 Smoo Cave is a large combined sea cave and freshwater cave in Durness in Sutherland, Highland, Scotland. The cave was formed within Early Ordovician Dolostones of the Durness Limestone Group. Smoo Cave boundary formed between the light grey Sangomore Formation and dark grey, leopard Rock formation. The cave is unique that the first chamber has been formed by the action of the sea. Whereas the inner chambers are freshwater passages, formed from rainwater dissolving the carbonate dolostones. The peaty waters of the Allt Smoo flow off the moors, tranquil until they vanish into the darkness of a gaping sinkhole. The Smoo cave estimated receives 40,000 visitors annually.

The Smoo cave has formed a combination of erosion from the sea and an inland underground stream which has formed the innermost chambers. There are many superstitions associated with Smoo Cave. For many centuries it was believed to be the residence of the Devil. This was made it a convenient place for the local laird’s henchman to dump the bodies of anyone. Who fell afoul of what passed for local justice at the time.

It is a dramatic location set into limestone cliffs, quite large 200 feet long, 130 feet wide, and 50 feet high at the entrance. Eroded pillars of rock which once supported these long-vanished earlier versions of Smoo Cave still remain. Moreover, the first chamber of the cave is more than 60m long and 40m wide. A wooden walkway leads from here into the second (scream provoking) chamber.
Advertisement

The cave boasts one of the largest entrances to any sea cave in Britain. The cave is at 50 ft high and is floodlit inside. Smoo is a sea cave, but some part is karst formed inside limestones and dolomites. The karst features of Smoo cave are typical with impermeable and insoluble rocks surrounding it. Waters flowing on impermeable rock disappear in swallow holes as soon as they reach the border to the limestone. Then drain underground and reappear in karst springs and caves. Hence, a river is to be found inside, water from a burn which disappeared only a few meters away.

Legend has believed that the cave is a gateway to the Otherworld – or into the faery realm – and that it’s guarded by spirits. Smoo Cave has seen a lot of activity over the course of human history, much of it is unpleasant. If you are daring enough then the ideal way to experience Smoo Cave would probably be alone at night, by the light of an oil lamp or flaming torch, and with an overactive imagination!