Shirakawa is a small traditional mountain village located in Ōno District, Gifu Prefecture, Japan. It is best known for being the site of Shirakawago showcasing a building style known as gasshō-zukuri. It is one of UNESCO’s World Heritage Sites with Gokayama in Nanto, Toyama. The Shirakawa village was formed on July 1, 1897, with the establishment of the modern municipal system. Shirakawago has a population of around two thousand people as most of the population is in its river valley.

This region was cut off from the rest of the world for a long period of time. The Gassho-style houses subsisted on the cultivation of mulberry trees and the rearing of silkworms. The villages have a strong sense of community. Their traditional social systems and lifestyle customs have sustained their associated historic environments, management systems, and the level of authenticity is high.

Shirakawago total area is 356.55 km2, bordering Ishikawa Prefecture and Toyama Prefecture on the Ryōhaku Mountains. The village’s area is 95.7% mountainous forests, and its steep places are characteristic. In between the mountains flows the Shō River, which continues to the north into Nanto, Toyama. One can be reached at Shirakawago within 50 minutes from Takayama by using of Hida Tunnel.

Earlier it takes a three-hour drive and only an hour to Nanto in Toyama. The large houses with their steeply pitched thatched roofs are the only examples of their kind in Japan. The village does not have any passenger railway service. Moreover, it has one combined public elementary/junior high school but does not have a high school.

There are many natural attractions nearby. The most famous is Mount Haku, which is Japan’s Three Famous Mountains, surrounded by a virgin forest at its foot. Also, three gorgeous waterfalls: Taka falls, Naka falls, and Ki falls, can be seen along the pass leading to the Amo highlands.

Another waterfall, Hakusui Falls, pours from the artificial Hakusui Lake, which was formed by a dam at an elevation of 1,260 meters. To take a rest from hiking and relax a little, the area also has several hot springs, such as the Hirase hot spring bathhouse.

Shirakawago has a humid climate, features four distinct seasons with winter is being most recognized. Shirakawa village is one of the snowiest places in Japan, averaging snowfall amounts in excess of 10 meters with snowbanks developing well over 2 meters tall. As a consequence of the frequent heavy snow, characteristically thick thatched roofed “Gasshō-zukuri” houses were created. These sites are major tourist attractions due to Hakusan National Park mountain ranges as a background.

Seasonal tourism boosts the economy of Shrakawago. They came to see the gassho-zukuri ultimately improve the financial condition of villagers. The area has further improved once the village became a UNESCO site. The increase in traffic resulted in damaging the area from pollution. Thus, local inhabitants’ life standards enhanced, and they converted their homes into hostels, gift shops, and parking lots. So every good thing has bad effects also. The fast-growing visitors change the charm of village simplicity and fundamental Japanese scenery.

Shirakawago’s landscape is home to gassho-style houses, old-style Japanese inns, and hotels to outfit any visitor. Further, there are more than forty different options for accommodation. By staying in an old-style gassho-style guesthouse, guests can experience the simple practicality of ancient Japanese life.

Moreover, the characteristic features include rustic roof beams, tatami flooring, and traditional sunken hearths. Also, you can relish the local specialties and exclusive dishes that make up Shirakawago’s regional cuisine. For other accommodation choices, rooms are available both without and with meals, and few guesthouses offer dormitory beds. In all cases, you have to make reservations in advance. 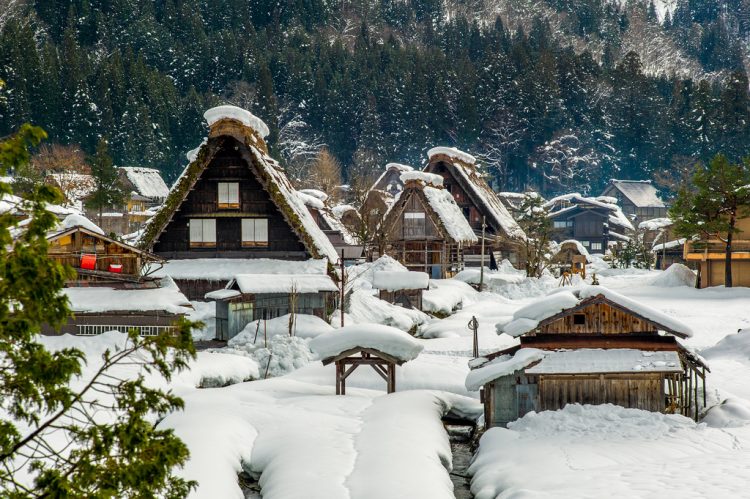