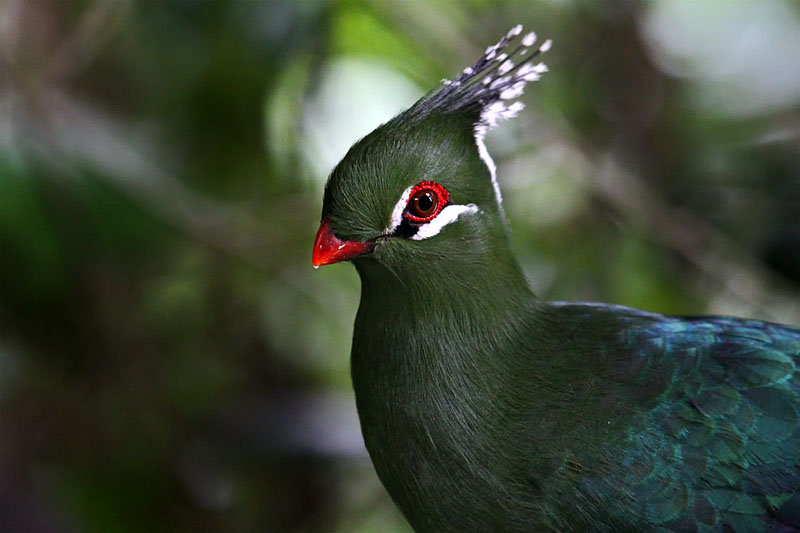 The Schalow’s turaco (Tauraco schalowi) is a frugivorous bird in the Musophagidae family. The bird is named after Herman Schalow, actually, mature birds have, on average, the longest crests of any turaco species. The attractive colors that pattern the plumage of Schalow’s turaco are derived from two unique copper pigments within it’s feathers, unidentified in any other bird family. This bird’s common name and Latin binomial commemorate the German banker and amateur ornithologist Hermann Schalow.

The Schalow’s turaco is found in the forested uplands and wooded inland plateaus of south-central Africa.

The bird is replaced in the eastern lowlands by Livingstone’s turaco. Which is similar in appearance and behavior. Like other turacos, it is a medium-sized bird, with short, rounded wings, a long tail, and a stout, curved bill.

An extremely prominent, white-tipped crest adorns the head. While a ring of bare red skin surrounds the eye, delicately bordered with fine, black and white stripes. The upperparts are largely green, but noticeably darker over the mantle and wings. The bird size is 41-44 cm, an average weight of 208 – 267 g.

In spite of being poor fliers, the forest turacos seldom descend to the ground. Instead, these shy but gregarious birds utilize they’re extraordinary climbing skills. The bird navigates the tree canopy, skipping nimbly from branch to branch. When unassailable gaps do eventually necessitate flight. They take to the air with a few earnest flaps to the next tree, before clambering back up into the leafy crown.

It is mainly distributed in Zambia, central Angola, the southern DRC, and the uplands of southern Kenya, northern and western Tanzania and western Malawi. The bird occurs very locally in Botswana, Namibia, and Zimbabwe. Here it frequents riparian habitats of the Zambezi and Cuando Rivers.

Also during flight, it’s feathers are crimson, and the tail is deep, bluish black to violet. In common with all turacos, the feet have a distinct joint that lets the outer toe to move either forward or backward. An attribute that enables this bird to move dextrously through vegetation. Schalow’s turaco was formerly believed to be a subspecies of Tauraco persa, along with T. livingstonii and T. corythaix.

The bird courtship includes much calling, chasing and general exhibition. Spreading they’re wings to display the striking crimson patches. The bird’s nest is mostly flimsy is a shallow platform of loose twigs, positioned 3-10 meters above the ground in thick foliage. The clutch size of two is typical, and the downy chicks hatch after an incubation period of 20 to 22 days, devotedly taken care by both sexes.

The precocious chicks do not linger long in the nest. Within 2 to 3 weeks, are clambering through the branches of the nest tree, a full week or two before they learn to fly.