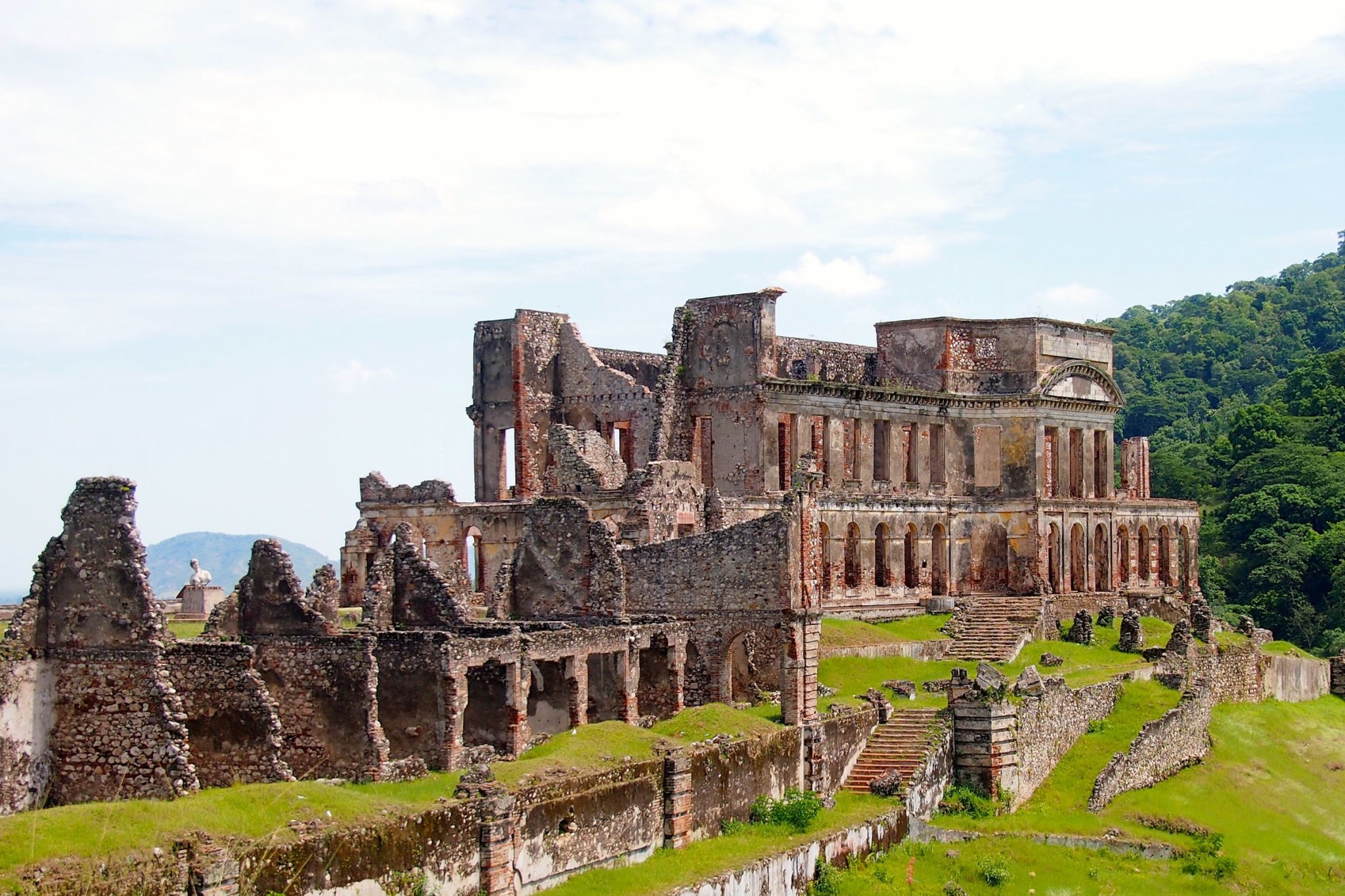 In the Town of Milot, Nord, the royal residence of King Henri located approximately five kilometers northeast of Citadelle Laferriere. From the South West, it is thirteen kilometers off the Three Bays Protected Area.  I hope you would have guessed the name of this palace? Well, this is the Sans-Souci Palace in Haiti. It is a French name which means ‘carefree’.

King Henri is also known as ‘Henri Christophe’ with his Wife Queen Marie Louise and two daughters. Sans-Souci the palace is one of the most important of nine palaces built by King. He was also famous for building numerous forts, sprawling summer’s homes, and fifteen châteaux. In 1982, the UNESCO designated Sans-Souci Palace and the Citadelle as World Heritage Sites. Some scholars believed that Christophe took part of his inspiration for the palace from the Prussian king Frederick the Great palace in Potsdam, Sans-Souci, a symbol of European Enlightenment achievement.

King Christophe was self-imposed monarch; a former slave had fought in the American Revolutionary War beside with George Washington. In 1804, he went to be a main leader in the Haitian Revolution, when the small nations gain independence from France. The Sans-Souci palace city of Milot has extended to the border of the site, and the required for natural resources, such as limestone and trees, are impacting the surrounding landscape.

Sans Souci Palace was built only a few yards away or maybe even exactly over, the place where one of traitor himself was killed by Christophe. In 1842, a massive earthquake destroyed a substantial part of the Sans-Souci and palace was never rebuilt. Before the earthquake destruction, the palace was acknowledged by many legends to be the Caribbean equivalent of the Palace of Versailles in France.

After the permanent damage was done by the earthquake, the palace foundation is weakening by rainwater and constant deforestation. This factor puts the stability of the mountain at stake. Moreover, local authorities neglect the site and assured now to in charge of the responsibility of keeping all the cultural sites safe and in good condition.

During his time in power, the palace was notorious for opulent feasting and dancing. It has artificial springs, huge gardens, and waterworks system. Unfortunately, the palace is empty ruin these days. It was splendor dream of foreign visitors in his prime time. It was remarked the reputation of having been one of the most magnificent edifices of the Caribbean Island.

The pomp and circumstance of Sans-Souci was part of King Program to demonstrate the Europeans and Americans, the power and ability of the black race. King Christophe’s reign established hereditary nobility, along with coats of arms and prescribed ceremonial dress drew heavily on European monarchical signs of prestige.

The African was feeling the pride to be part of palace construction. One of his advisors, Pompee Valentin Vastey said, the Sans-Souci and it’s in close proximity church, erected by descendants of Africans. They demonstrate not to lose the architectural taste and mastermind of our ancestors who covered Ethiopia, Egypt, Carthage, and Spain with their superb monuments.

Some scholars argue Sans-Souci architecture is inspired by the Boffrand’s designs for the Château de la Malgrange for Leopold, Duke of Lorraine, close to Nancy. It is one of the most remarkable attractions in the Western Hemisphere. The Palace of Sans-Souci is seldom visited by foreigners due to several decades of political instability and lawlessness in Haiti.

Another famous fortress Citadelle Laferrière located adjacent with Sans-Suci palace. The renowned mountaintop fortress; built under a decree by King Henri Christophe to repel a terror of French invasion that never happened. The Citadelle Laferrière Fortress is reached by ongoing trail behind the Palace. In 1825, Haiti was recognized colonial power by France.

Haiti agreed to pay a massive ruinous indemnity of 150 million francs in return for diplomatic and economic relations. The gigantic stone structure is located about 17 miles south of the city of Cap-Haïtien and five miles uphill from the town of Milot. The Citadelle Laferrière Fortress was constructed up to 20,000 workers between 1805 and 1820 as part of the system of fortification designed to keep Haiti safe from French attack.

On October 1820, King Henri crippled by a stroke, and he committed suicide on the grounds, shooting himself with a silver bullet on the grounds of the palace. According to Haitian legend, he shot himself with a silver bullet and then he was subsequently buried in the Citadelle. His son Jacques Victor Henri bayoneted to death by revolutionaries at the palace. He has also nominated nobility and as prince and heir.

The palace does not have adequate tourist infrastructure and information to provide somewhere to stay visitors. The structures are not maintained regularly and preserving the site infrastructure. The City of Cap-Haitien is a peaceful and wonderful place. But on rare occasion’s tourist visit the palace.

It is mainly because of political instability and lawlessness in the country. Moreover, taxis are preferred mode of transport whereas local things such souvenirs are made and sold outside and within the Palace.