The Saffron Toucanet (Pteroglossus bailloni) is a South American Toucan belongs to the family Ramphastidae. This bird can find in the Argentina, Brazil, and Paraguay. It is also called Baillon’s toucan, banana toucan, saffron-colored Araçari-banana, and yellow toucanet.

Despite its distinctive appearance, the bird has not been well studied and very little known about its natural history. The bird is usually seen in the canopy of humid and second growth forests in small groups, occasionally descending to visit feeding stations.

They are habitually quiet, secretive. It has long-tailed toucan with a length of 35 to 40cm. This is uniquely among toucans, overall saffron yellow. The tail is bit olive or darker, but rump, ocular skin. The patches on the basal half of the greenish horn bill are red with iris is pale yellowish. In Brazil, they mostly occur in lowland and montane regions mostly on slopes and besides streams.

Both, male and female have distinguished appearance. The appearance is so distinctive that traditionally classified in the monotypic genus Baillonius.  An adult male bird has golden head and breast, olive mantle with red rump. The male is also modestly sized toucan, with green, blue grey, and yellow grey color. Whereas, a female adult bird is same to male but have dark olive and less gold coloration with short bill.

Saffron Toucanet found in the Atlantic Forest of Argentina. It is believed the bird is part of an ancient stock that became isolated in the present Atlantic Forest from marine transgression, which couldn’t adapt and invade the Brazilian Savanna. The bird was found to be endemic and high sensitivity to the fragmentation. It is also observed that Saffron usually nest in abandoned woodpecker holes or other tree cavities.

Saffron Toucanet is a large gape frugivore, hence it has greater ability to carry larger seeds to new locations. This bird normally building nests in October had a cavity depth of 20 to 68cm at a 7 to 24 meters height. They like to build nests on Garapa and Aspidosperma australe.  The male bird courtship display is to involve singing and feeding the female and preen to each other.

The female bird normally lay 2 to 3 eggs that are incubated by both parents for at least 16 to 17 days. Both parents feed the chicks, and the young fledge after about 6 weeks. The adults continue to feed them for several weeks after fledging. Saffron Toucanet prefers to eat fruit (palmito fruit), figs, and palm fruits, small animals (including smaller birds and their nestlings). The bird is higher risk of extinction due to habitat loss, degradation, hunting and being captured.

Sadly, Toucanet is presently on the threshold of extinction by Birdlife International. Moreover, they are famous bird for illegal bird trade and in danger from hunted by humans. It is imperative to focus on increasing the bird populations as 46 species are under threat of global extinction. Saffron Toucanet beauty is habitually its undoing, as it is captured illegally for the cage-bird trade. 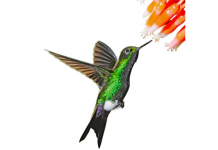 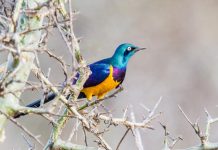 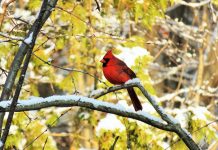 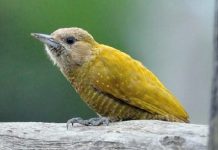 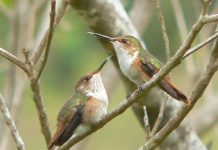 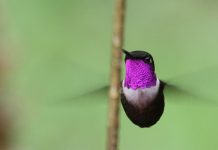