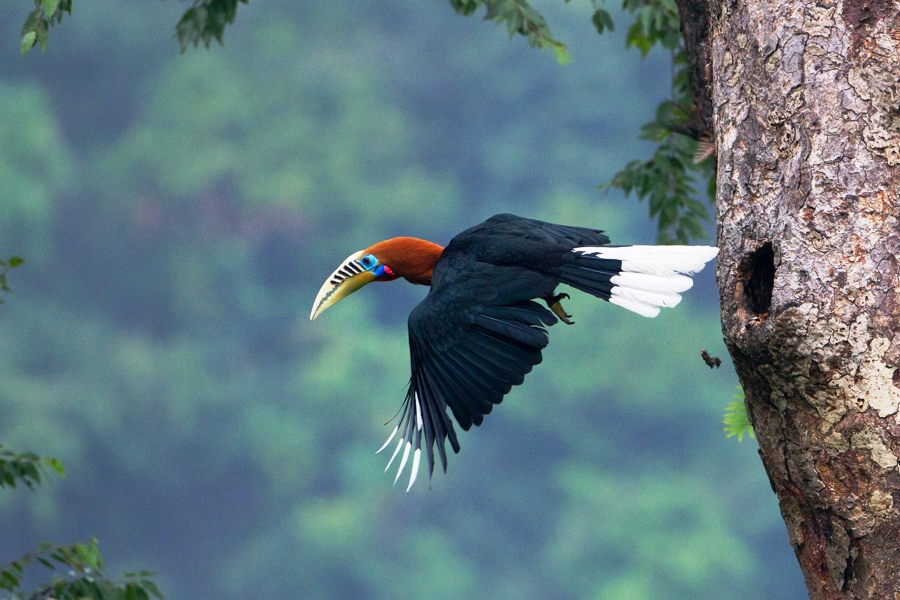 Rufous-necked Hornbill (Aceros nipalensis) is a beautiful species of hornbill in the northeastern Indian Subcontinent and Southeast Asia. Rufous-necked hornbill numbers had declined significantly due to habitat loss and hunting, and it has been completely extirpated from Nepal. It is projected that their numbers are now less than 10,000 adults remaining, with a length of about 117 centimeters, it is amongst the largest Bucerotine hornbills.

The underparts, neck, and head are rich Rufous in the male, but black in the female. The head, neck, and lower body of the male are colored Rufous, with deeper coloration on the flanks and abdomen. However, the middle primaries and the lower half of the tail are tipped white. And the rest of the hornbill’s plumage is a glossy dark green and black. The species’ lower tail-covert feathers are colored chestnut mixed with black. Whereas on the other hand “The female”, are black, except for the end-portion of her tail and the tips of the middle primaries, which normally are white.
Advertisement

Juvenile hornbills look like adults of the same sex but lack the ridges at the base of the upper beak. The beak absences a true caïque but is thickened at its base. Rufous-Necked Hornbill has a number of dark ridges on the upper beak, which are lacking in the young and increase in number with age, up to about seven. The commissar of the beaks is broken for both sexes.

While mainly a bird of ridged and hilly forests, primarily broadleaved forests at altitudes of 150–2,200 meters, it has also been recorded in dry woodland. The nesting period starts from March to June, and the trees being preferred are tall and have broad girths. There is an indication to suggest the Rufous-necked Hornbill communities move seasonally between one forested area to another to avail of the differing abundance of fruiting trees due to local conditions.

Therefore, the egg shape is a broad oval, compressed slightly towards one end, to be slightly pyriform. However, the shell is strong and thick, but coarse and completely gloss less, all over pitted with minute pores. In color, it is a very dirty white, with a pale dirty yellowish tinged, and everywhere obscurely stippled when carefully observed, with minute purer white specks, owing to the dirt not having got down into the bottoms of the pores.

In Arunachal Pradesh, Rufous-necked hornbills have been hunted by tribal for their feathers and beak. Rufous-Necked hornbill can be found in Bhutan, China, Myanmar, Laos, Thailand, Vietnam, and northeast India, the rufous-necked hornbill has suffered a massive population decline, and is believed to be extinct in its historical array country, Nepal.

The Rufous-necked hornbill existing in little numbers in many reserves, sanctuaries and national parks across it is a range, but the popularity of these areas would benefit from improved management systems. 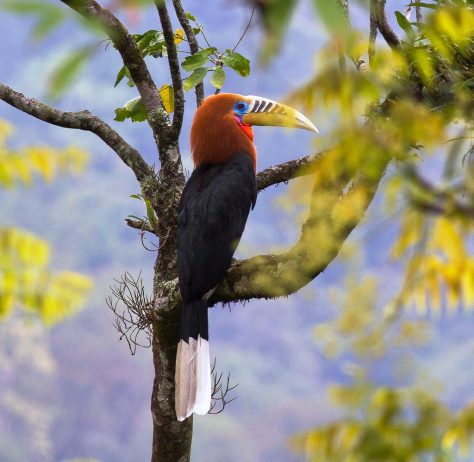 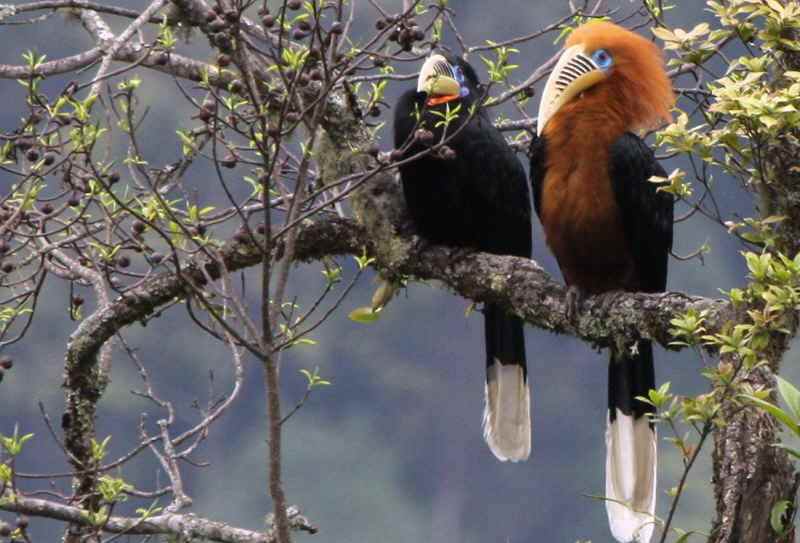 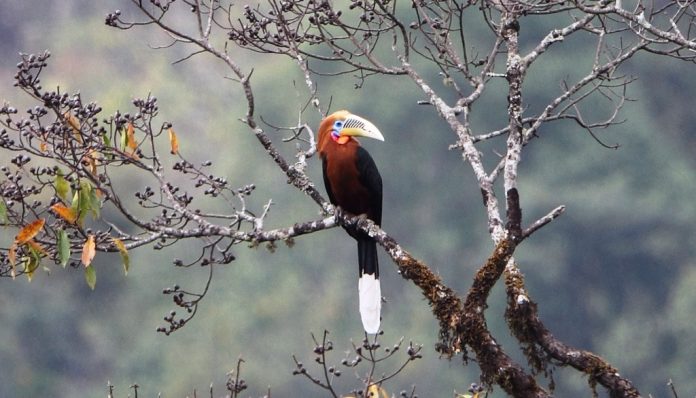 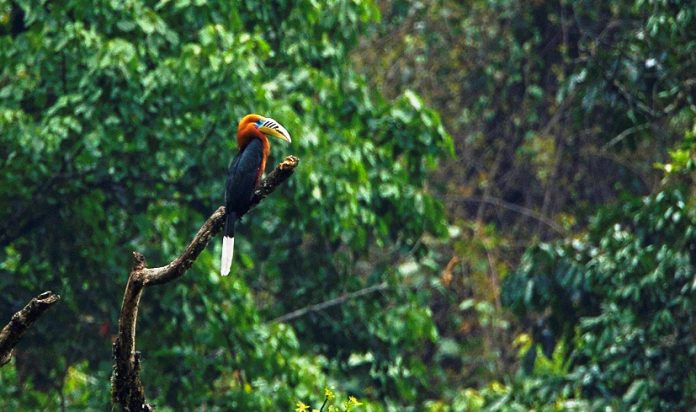 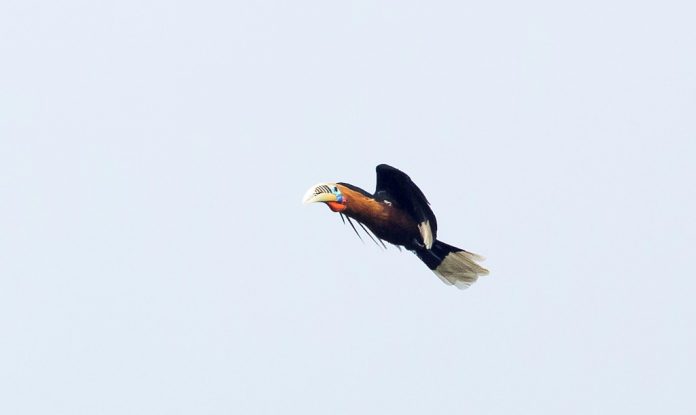 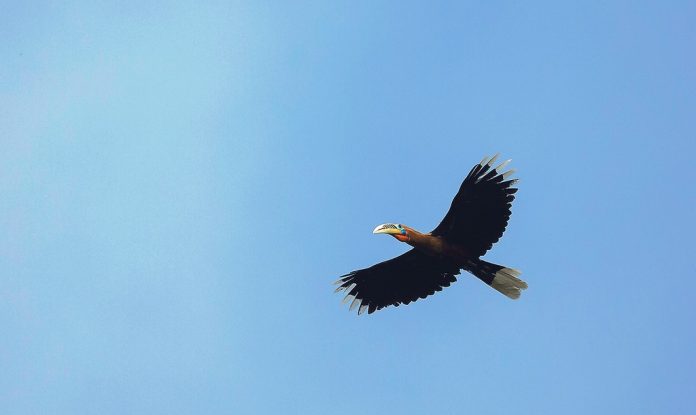 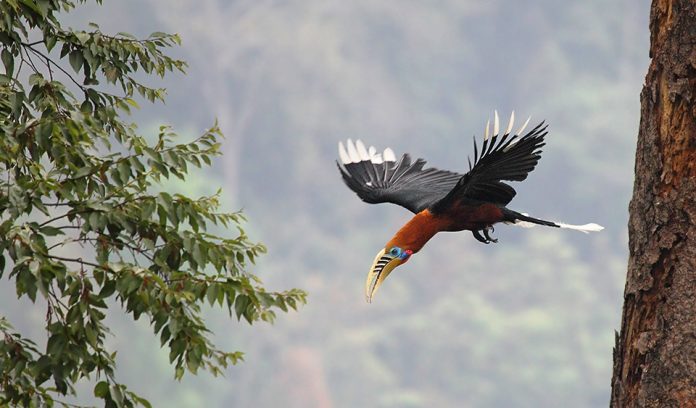 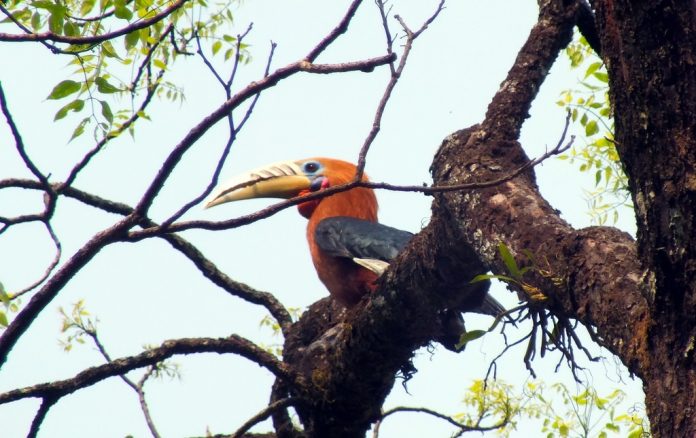 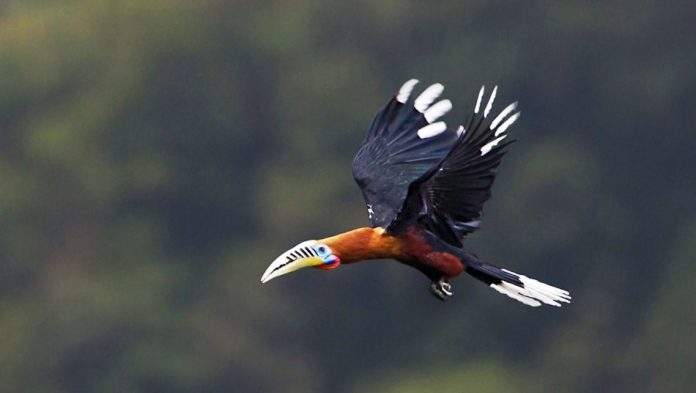 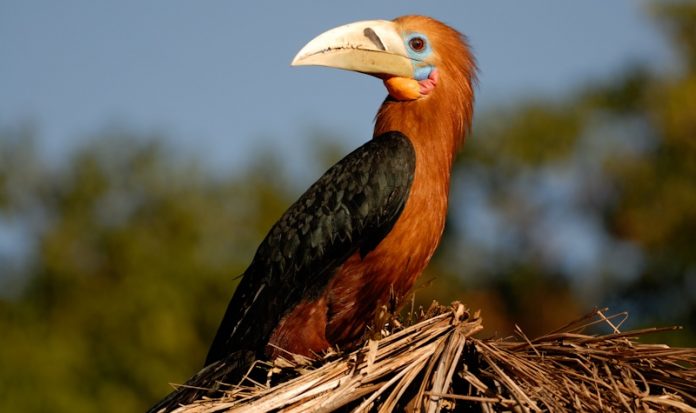