Okunoshima is a small Island situated in the Inland Sea of Japan between Hiroshima and Shikoku. The island played a prominent role during World War II, which served as a military installation mainly responsible for pumping out toxic chemicals. Later on, the Japanese has developed the island for tourism.

There is lot of interesting things to see here, like campsites, walking tails, historical places. But one thing that is famous bunnies of beautiful island. Countless feral rabbits that roam the island, they are rather and tame and will approach humans. This is why it is called Rabbit Island.

The travelers would like to call them doesn’t change the fact that the island’s fluffy inhabitants are all sorts of cute. Japan Japan’s Imperial Army used the island to produce kilotons of deadly mustard gas. Although this is an isolated island; but in case of any major disaster Tokyo is far spared from island.
Advertisement

These days, Rabbit Island is a home of a golf course, parks, beaches and hotel, despite of grim military past. As far as rabbits concerns, they are technically wild but now have to use of human presence, even they will hop onto your lap in the hope of cabbage, carrots. The travelers, normally can buy rabbit feed from resort hotel.

A report suggests it was a group of school children who released eight test bunnies into the predator-free wild where they’ve multiplied to over 300 long-eared little critters. For photo lovers, lot of little bunnies in action there, where you can spend some time to take awesome photographs.

The little inhabitants of islands have created something for the increase of tourism. They are drawing thousands of travelers to photos of hordes of bunnies by their feet or see the island’s other attraction. Some debate the island might not be entirely safe as there has never been any major decontamination of the whole island.

It’s rumored that there are quite a lot of sealed locations on the island where workers reportedly buried gas when the war ended. Hunting rabbits is forbidden and dogs and cats may not be taken onto the island. The ruins of the old forts and the gas factory can be found all over the island. But the entry is prohibited as it is too dangerous. 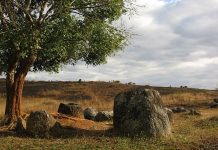