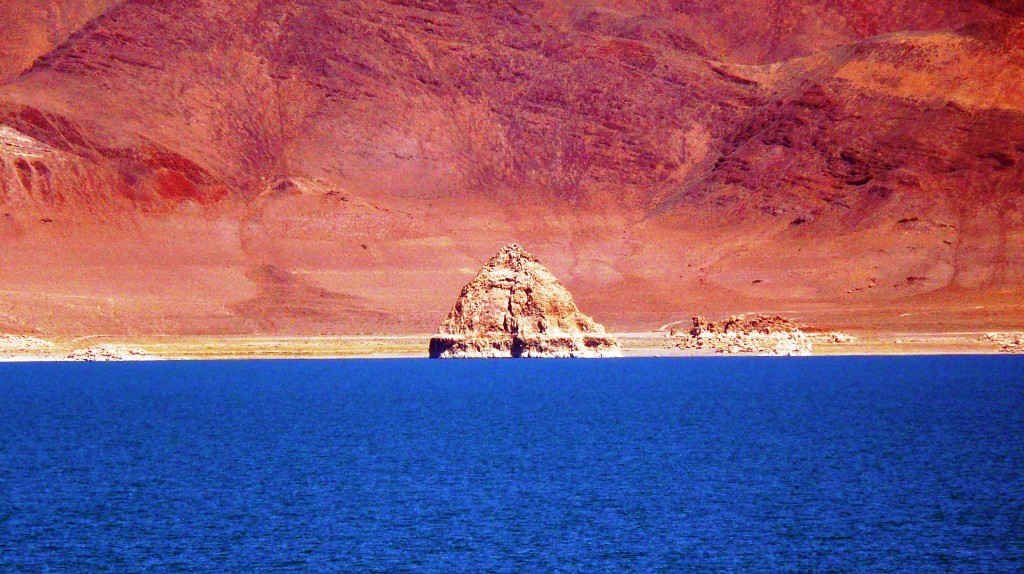 Pyramid Lake is the geographic sink of the Truckee River Basin. Mainly fed by the Truckee River, which is mostly the outflow from Lake Tahoe, almost 64 km northeast of Reno. The Truckee River enters Pyramid Lake at its southern end. It has no outlet, with water leaving only by evaporation or sub-surface seepage. The lake’s name comes from the inspiring cone or pyramid-shaped tufa formations found in the lake and along the shores.

The stunning Lake covers 125,000 acres, actually, one of the largest natural lakes in the state of Nevada, in fact, making it the biggest remnant of ancient Lake Lahontan. The colossal inland sea that once covered most of Nevada. Pyramid Lake has about 10% of the area of the Great Salt Lake, but it has about 25% more volume.

The rainbow colors of Pyramid lake changes from blue to gray depending on the skies above. The lake scenery is remarkable, surrounded by rare rock formations, has an important role in the history of the Paiute Indian tribe also adds to its mystique and many myths and tales surrounding it.

These days, Pyramid Lake is part of the “National Scenic Byways Program” and the only byway in the country located completely within a tribal reservation. Tourists can get a sense of the Lake’s significance to the tribe with a trip to the area of Paiute Tribe Museum and Visitors Center. Therefore, the multipurpose museum features more than a few exhibits and displays about the tribe’s culture and history.
Advertisement

In 2010, Pyramid Lake was designated as the first Preserve America Tribal Community in Nevada, which inspires and supports community efforts to preserve and enjoy priceless cultural and natural heritage. Although the Lake is widely acclaimed as North America’s most beautiful desert lake, it’s, in fact, the world-class fishery that has brought Pyramid Lake worldwide fame.

The pyramid lake salinity is about 1/6 that of seawater. Although clear Lake Tahoe forms the headwaters that drain to Pyramid Lake, the Truckee River delivers more turbid waters to the Lake after traversing the steep Sierra terrain and collecting moderately high silt-loaded surface runoff.

Pyramid Lake is one of the most valued assets of the Tribe and is entirely enclosed within the boundaries of the Reservation. Moreover, there are a lot of fun activities there, including camping, boating, picnicking, water-skiing, swimming, and fishing.

Furthermore, fishing is a popular hunting ground at the Lake even in winter’s weather, where they can catch fish such as large & small-mouth striped bass trout, catfish, bluegill, and crappie. Most of the Lake’s beaches are accessible only by boat because of the steep shoreline. Moreover, the lake water levels vary every day because it provides regulatory storage for Castaic Power-plant.

In the canyons where numerous canoes and rafts are seen, however, boating speed limits vary in parts of the lake, and are limited to low speeds. Though, higher speeds for waterskiing are permissible on the lake’s main body. In 1843, a gold discovery was made near Lake and in the Santa Feliciana Canyon, just south of what is now Pyramid Dam.