The strange monument UFO landing pad built by a man who claimed aliens told him to construct it. The UFO landing pad has been built in the middle of the Argentinian desert with the collection of white and brown rocks. The man gives the shape of a star, known as an ‘ovniport‘.  It appeared in the small town of Cachi in the province of Salta. The site is a huge attraction for UFO fanatics who hope to contact aliens.

The Swiss man Werner Jaisli travelled to town of Cachi in search of extraterrestrials. After that he have claimed to receive a ‘telepathic message’ from aliens telling him they required a place to land on earth. They landed about 100 meters above our heads and projected on us a beam of light that made us both see their own brightness. The funny thing is that it did not affect our vision. Something began to bubble through my brain: it was an order. They asked me telepathically to build the airport.’ Visitors flock to the site and no wonder, because it’s magnificent built.

He is thought to have instantly got to work, making a large star in 2008 with 36 points that measures 48 meters in diameter. Jaisli also made a smaller star and it took him till 2012 until his work was done. As a tourist’s point of view, the UFO landing pad is also popular with UFO enthusiasts. They believe they may be able to contact beings from another world from the site.

However, soon after the “ovniport” was built, the local people of Cachi stopped seeing Jaisli, who had a large beard and would often wear a Druid outfit. It is imprecise where he traveled to but some people sparking theories, that he may have been abducted by aliens. Although, it is thought he actually traveled back to Bolivia – with another theory that he went to Switzerland. 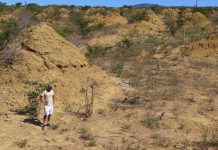