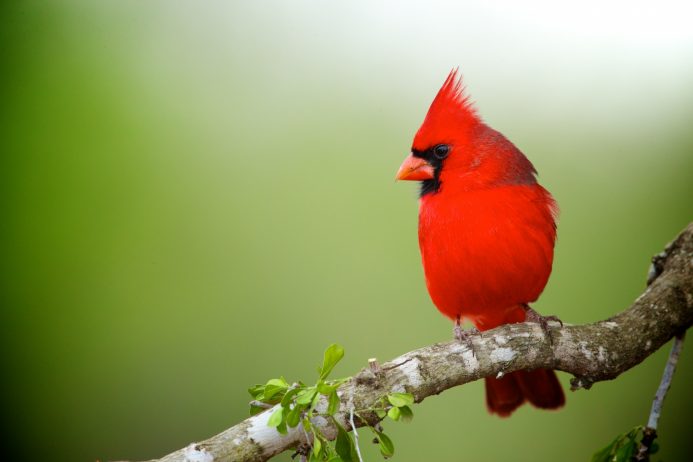 The Northern Cardinal Songbird (Cardinalis cardinalis) is a beautiful North American bird in the genus Cardinalis. This is also famous as “colloquially” as the redbird or common cardinal. It can be found in the eastern United States from Maine to Texas, south through Mexico and southern Canada. The species can be found in woodlands, gardens, shrublands, and swamps. The majestic red color bird is a mid-sized songbird with a body length of only 21 cm.

The Northern Cardinal Bird has a distinctive crest on the head and a mask on the face which is black in the male and gray in the female. The northern cardinal is so attractive and extremely loved that it has been named the official bird of no fewer than seven the United States. The bright red cardinals are effortlessly identified by even casual bird watchers and are often seen frequenting backyards and bird feeders.

After foraging elsewhere the birds eat insects, seeds, grain, fruit, and sap. Northern Cardinals are active songbirds and have the ability to sing a variety of different melodies. The male bird is very vibrant red; however, the female is a dull red-brown shade. The northern cardinal is mainly granivorous, and mainly he relies on feeds on insects and fruit. The male bird behaves territorially, marking out his territory with song.

Therefore during courtship, the male species feeds seed to the female beak-to-beak. A clutch of 3 to 4 eggs is laid, and 2 to 4 clutches are produced each year. It was once prized as a pet, but it’s a sale as a caged bird is now banned in the United States by the Migratory Bird Treaty Act of 1918.

The Northern Cardinal Songbird is widespread and abundant and has expanded its range over the last century or more. The bird current numbers perhaps stable and they’re naturally associated with open woodland. The sexes habitually have distinct appearances. The northern cardinal type species was named by colonists for the male’s red crest, reminiscent of a Catholic cardinal’s miter. The stunning Northern Cardinals will eat almost anything offered at feeding stations.
Advertisement

However, it is observed, their favorite foods are black-oil sunflower seed, cracked corn, suet, suet mixes, nutmeats of all kinds, melon seeds and safflower seed. The birds’ diet consists of 30 % insects, which makes cardinals extremely valuable to farmers and gardeners.

They like to eat some of the worst agricultural pests, codling moths, cotton cutworms, scale insects, cotton bollworms, grasshoppers, aphids, snails and slugs. Cardinal nests might be compact and well-lined with fine grass or hair, or they might be fragile and barely lined. The birds habitually use grass, rootlets, weed stems, pliable twigs, vines and bark strips, interwoven with leaves and paper or plastic.

Northern Cardinal Songbird is one of those birds that once you’ve seen this fellow you will have to admit he’s a looker. These red color birds are perpetual residents throughout there range. Though a slightly secretive bird while nesting, you may still be able to watch from a distance. It has been the experience of several bird watchers that if she feels threatened, the female bird will abandon her nest building and find a new location. The bird can be always watched from a distance.

In John James Audubon’s day (1785-1851), the Northern Cardinal was considered a southern bird and was rarely seen as far north as Philadelphia. By 1895, it’s range reached the Great Lakes, and by 1910, the cardinal was in southern Ontario and along the southern portions of the Hudson River.

Some authorities believe the cardinal’s push northward was due to more people feeding birds during the winter. Nowadays the Northern Cardinal is a year-round resident from the Dakotas, southern Ontario and Nova Scotia south to the Gulf Coast, and from southern Texas westward through Arizona and southward through Mexico as far as Guatemala and Honduras.

The history tells us, the Northern Cardinal was introduced in Hawaii in 1929 and now the bird is well established there and it also occurs sparingly in southeastern California and in Bermuda as an introduced species. Northern Cardinal Bird Meaning – A bird representative of a loved one who has passed away.

Though non-migratory birds, cardinals often gather in large flocks of up to 70 birds during winter months and can be found in bushy thickets in the more sheltered areas of there range. Most peoples believe Northern Cardinals mate for life, but during the winter season, the male bird does not allow his mate to feed with him.

When with the return of spring season, though, he regards her in a new light. Then we see the practice of mate-feeding when the male brings shucked sunflower seeds and other choice tidbits to the female. She waits with her wings all aflutter like a baby bird begging for food, and he places the seed in her bill as tenderly as the first kiss between lovers.

Although cardinals prefer to eat on the ground, they will come to bird tables, trays on posts and trees, window trays, and hanging feeders with perches. Water for drinking and bathing is just as important for Northern Cardinals in winter as it is during hot months. Because wet cardinals cannot fly quickly to safety, place you’re birdbath near cover so the birds can escape from cats and other predators.

When birdbaths are not available, cardinals bathe in shallow edges of ponds and streams, in snowmelt or in a puddle after rain. Just like most children, cardinals relish bathing in the spray of lawn sprinklers. Northern Cardinal has the ability to sing different songs. 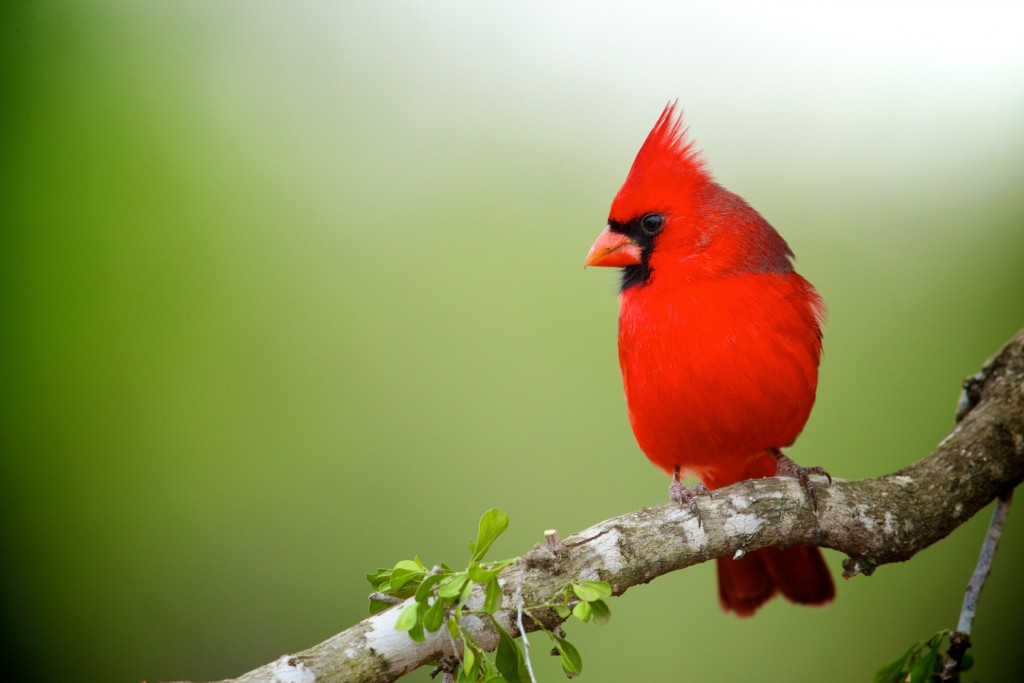 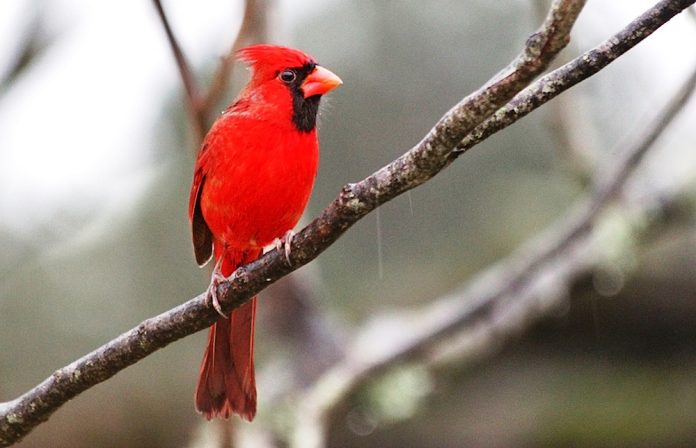 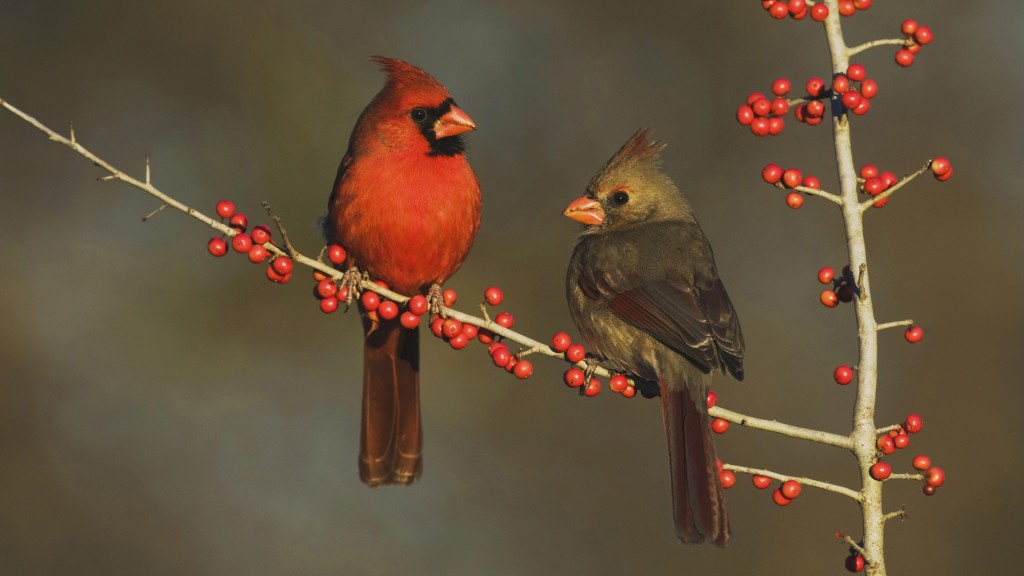 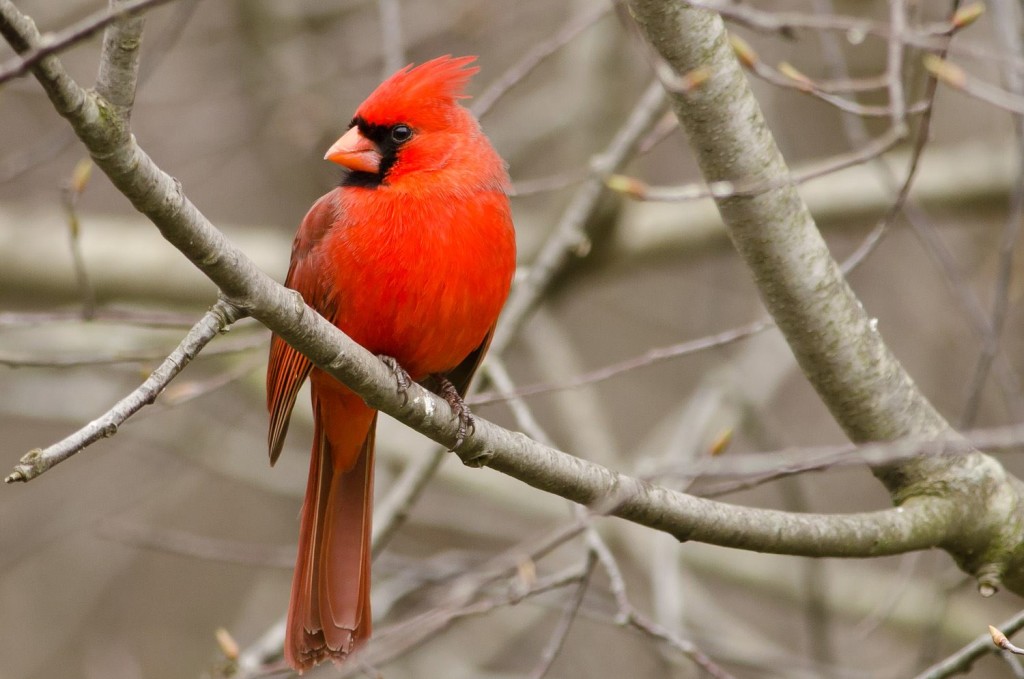 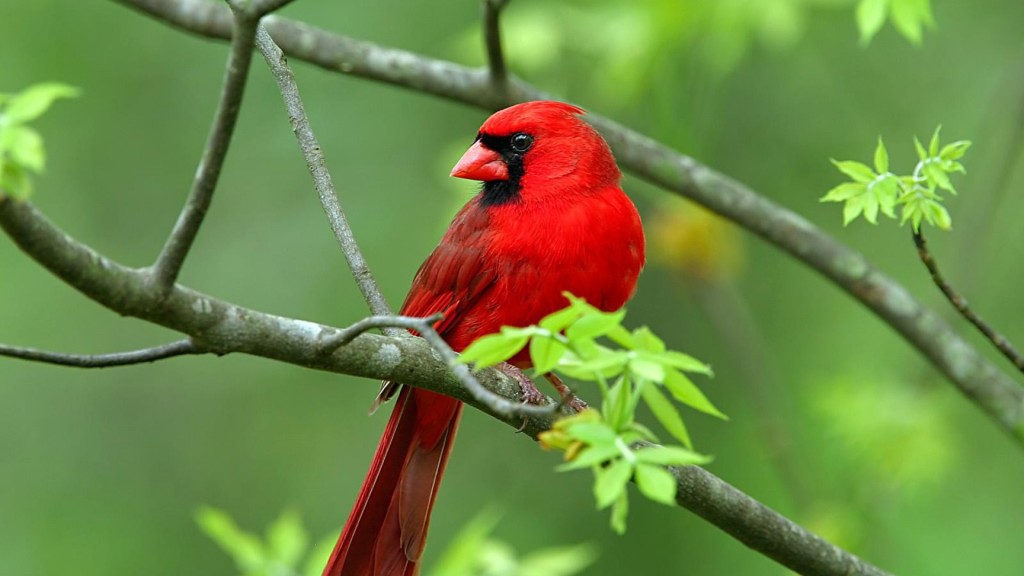 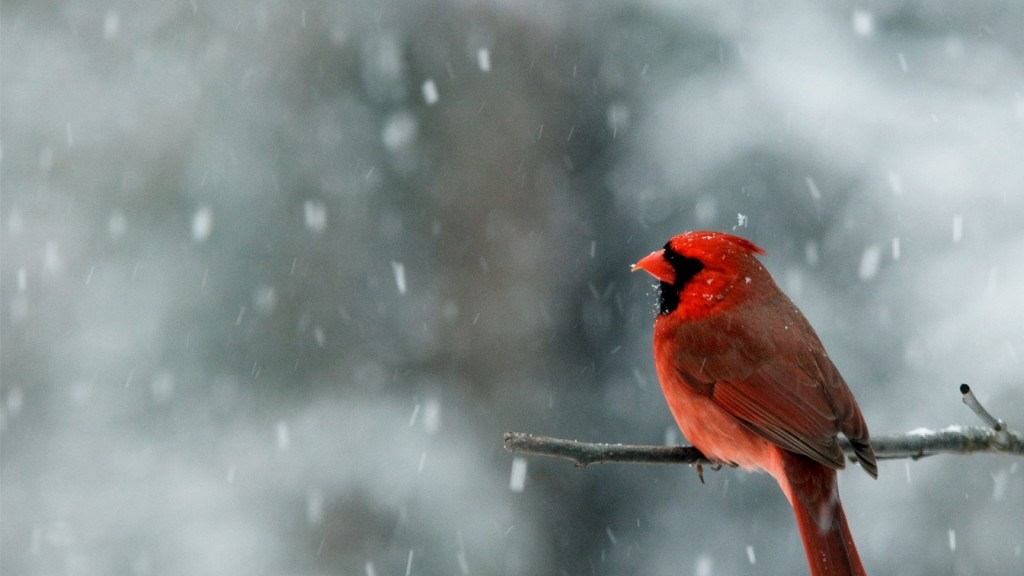 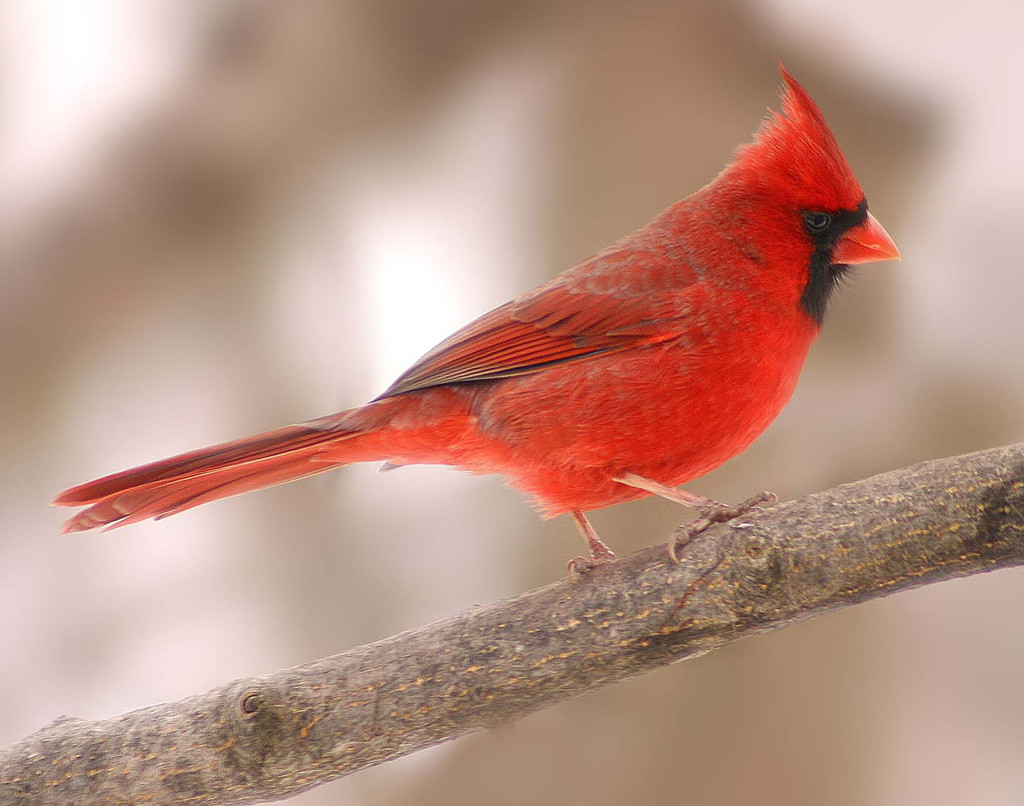 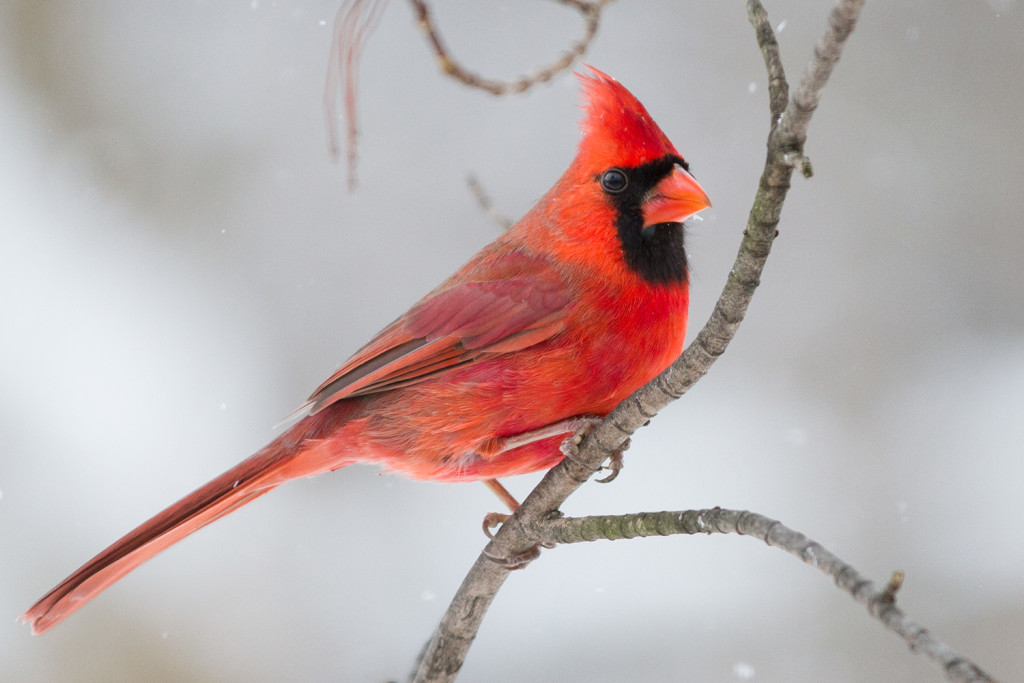 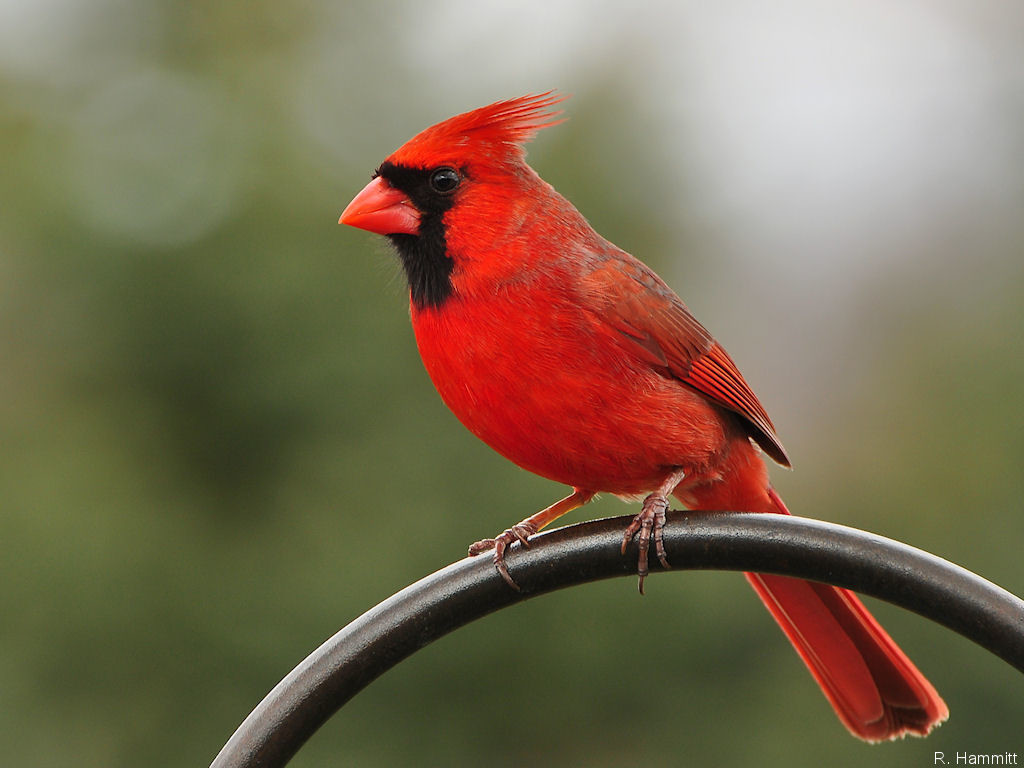 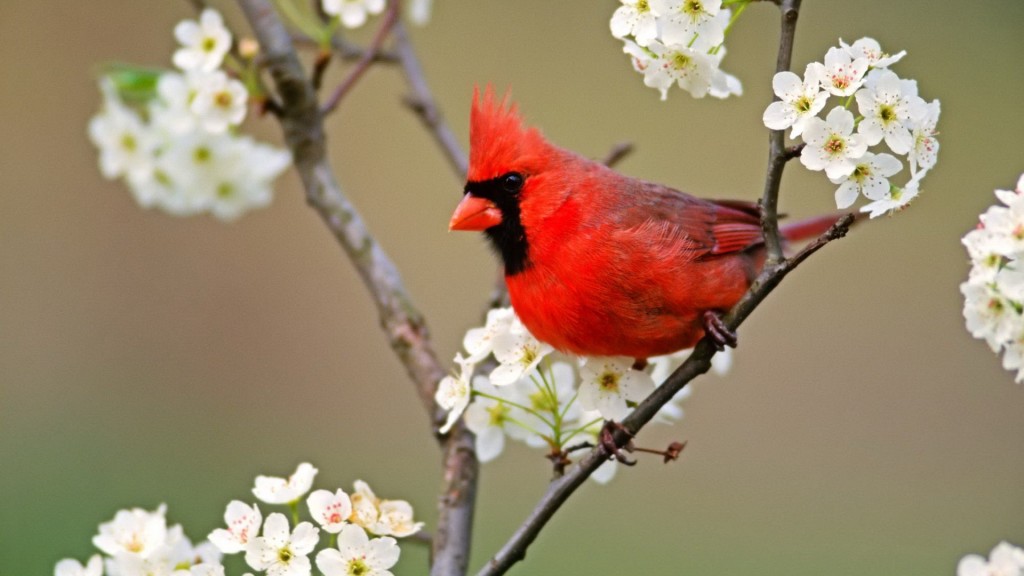 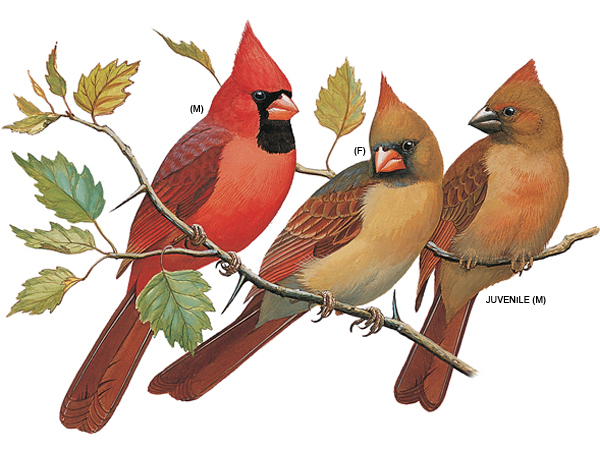 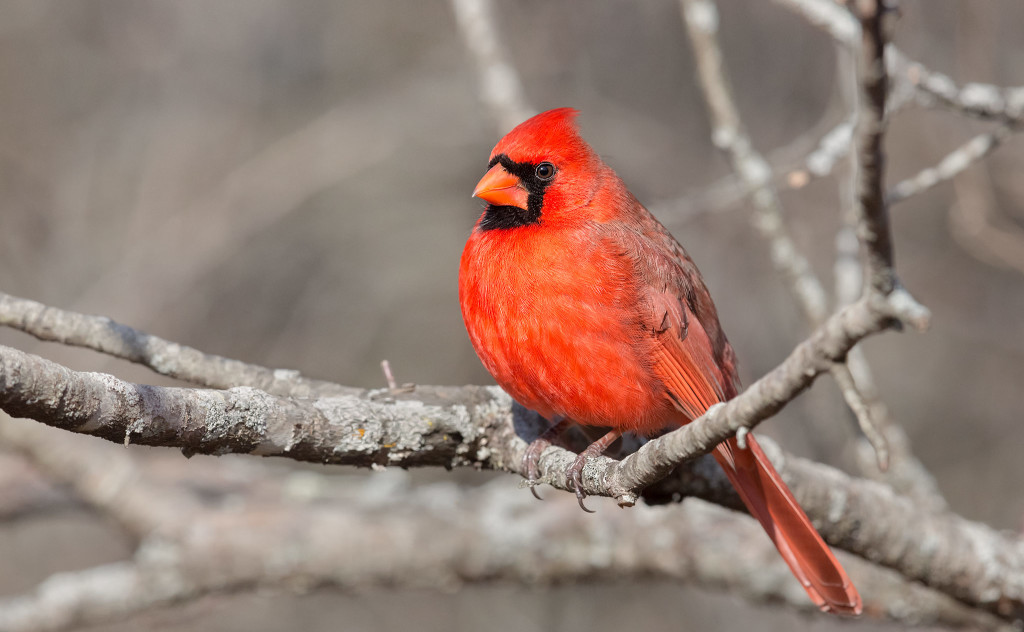 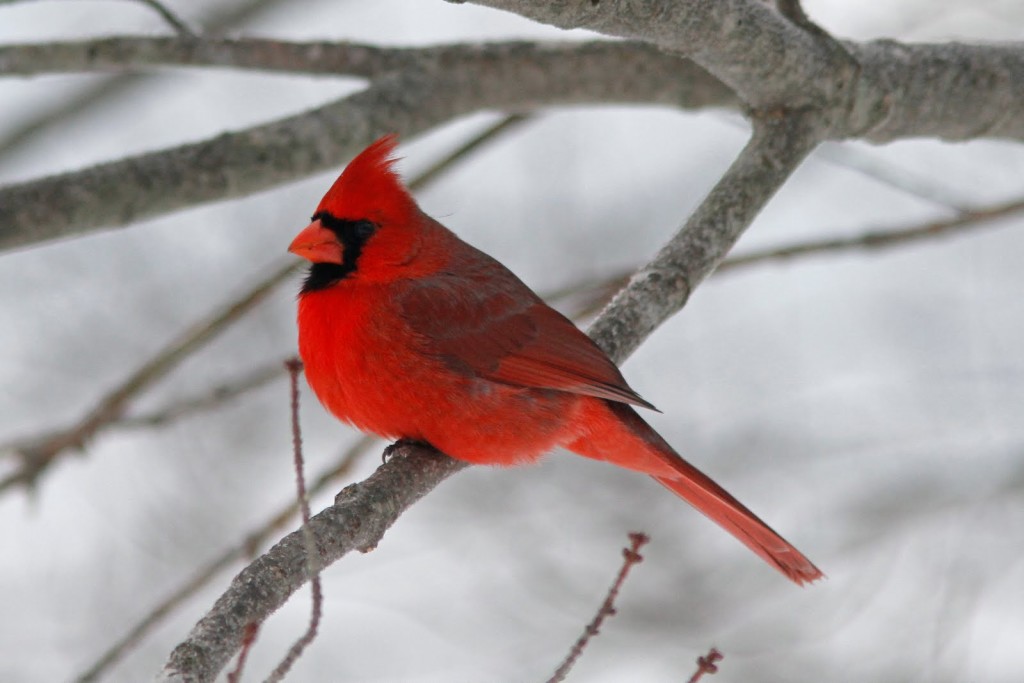 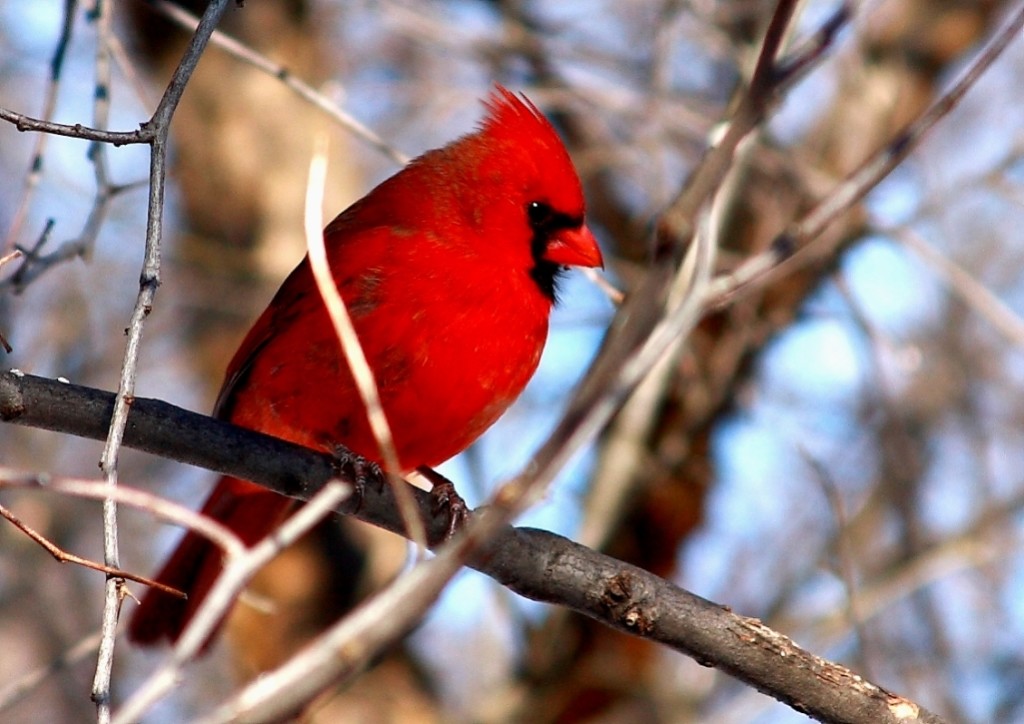 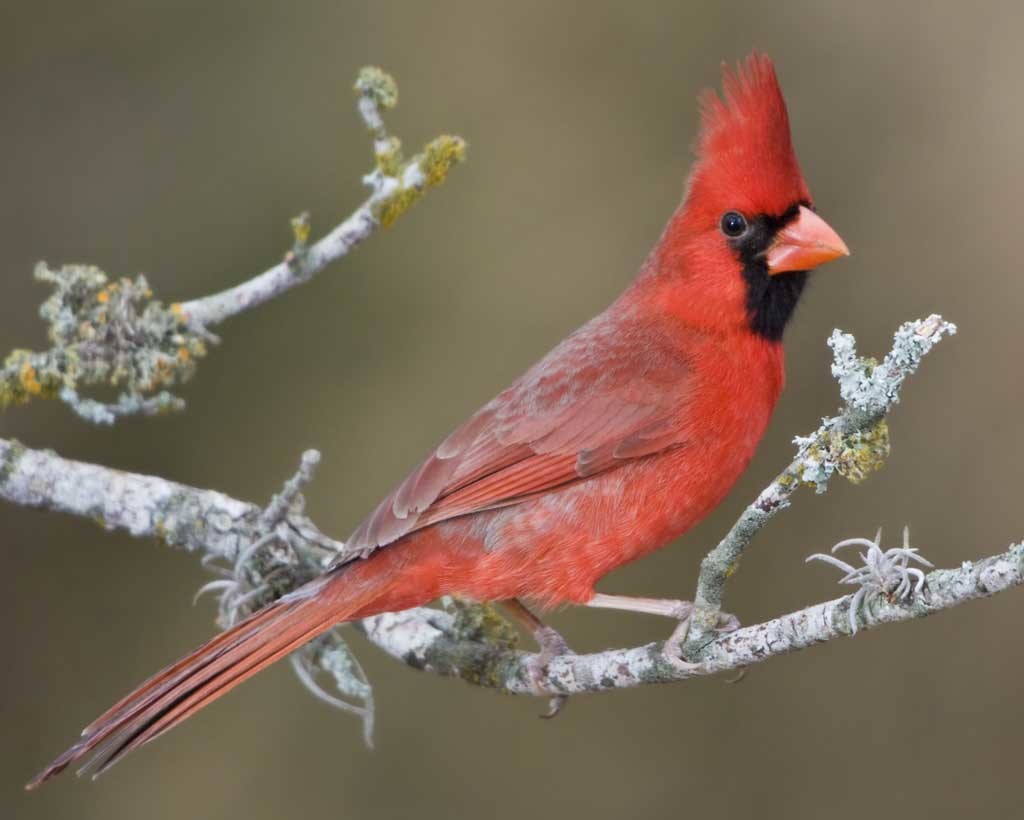 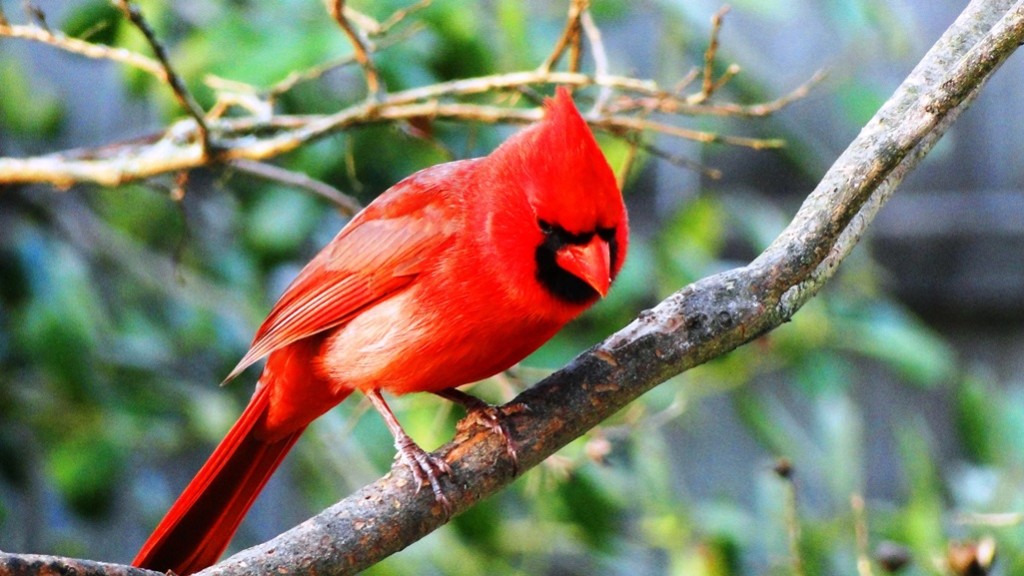 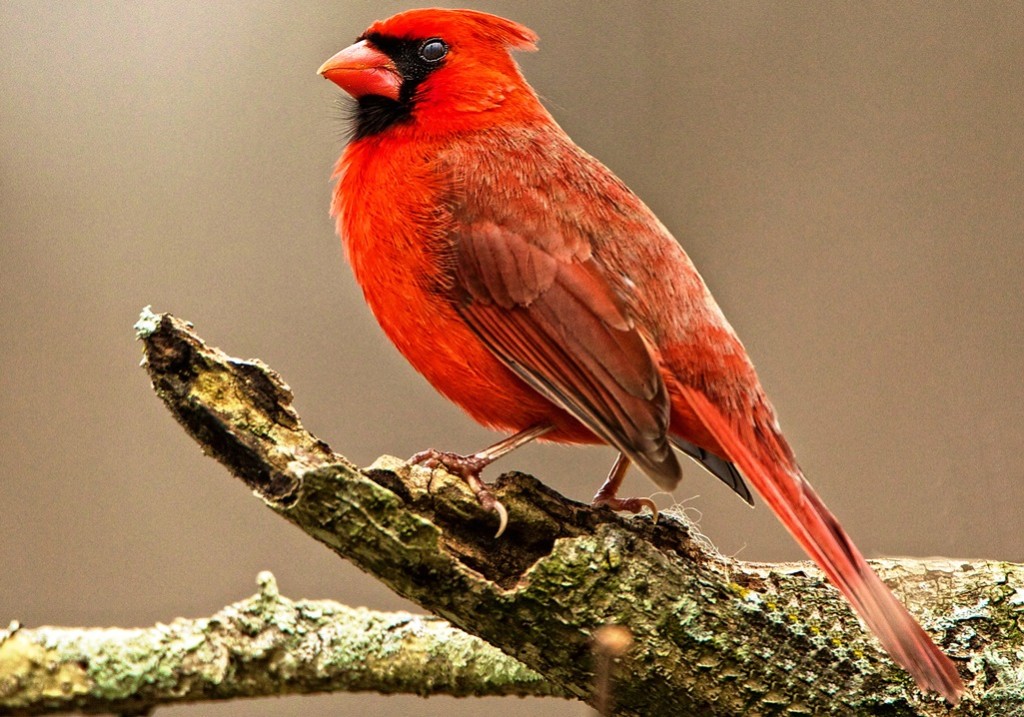 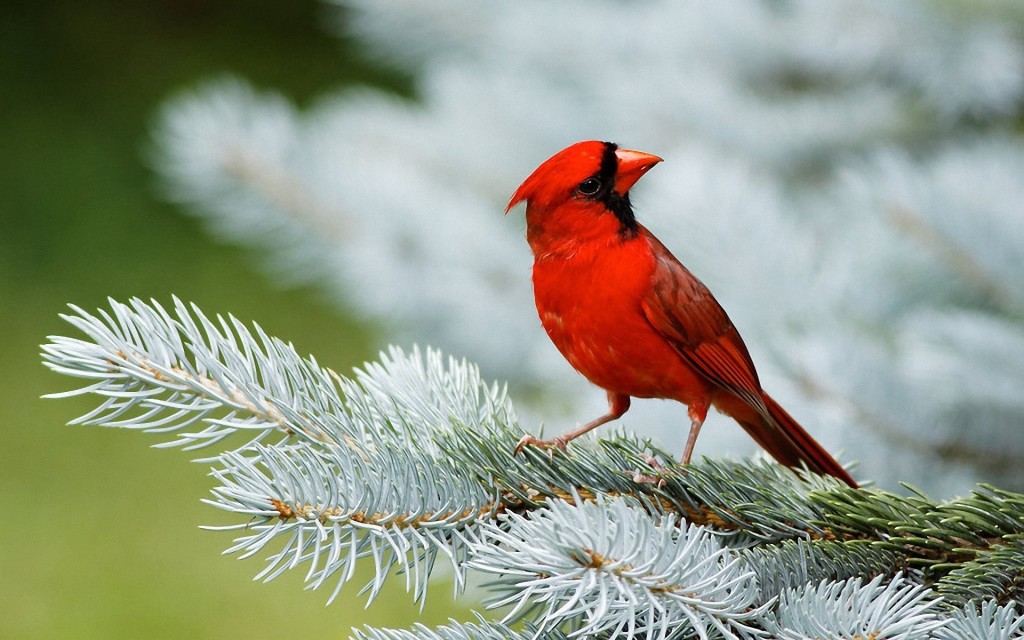 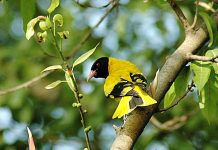 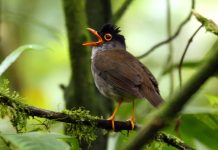 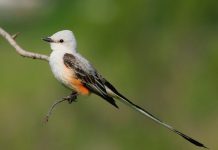 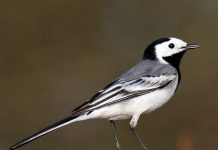 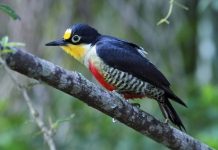 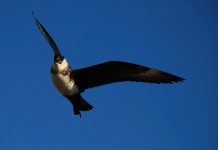