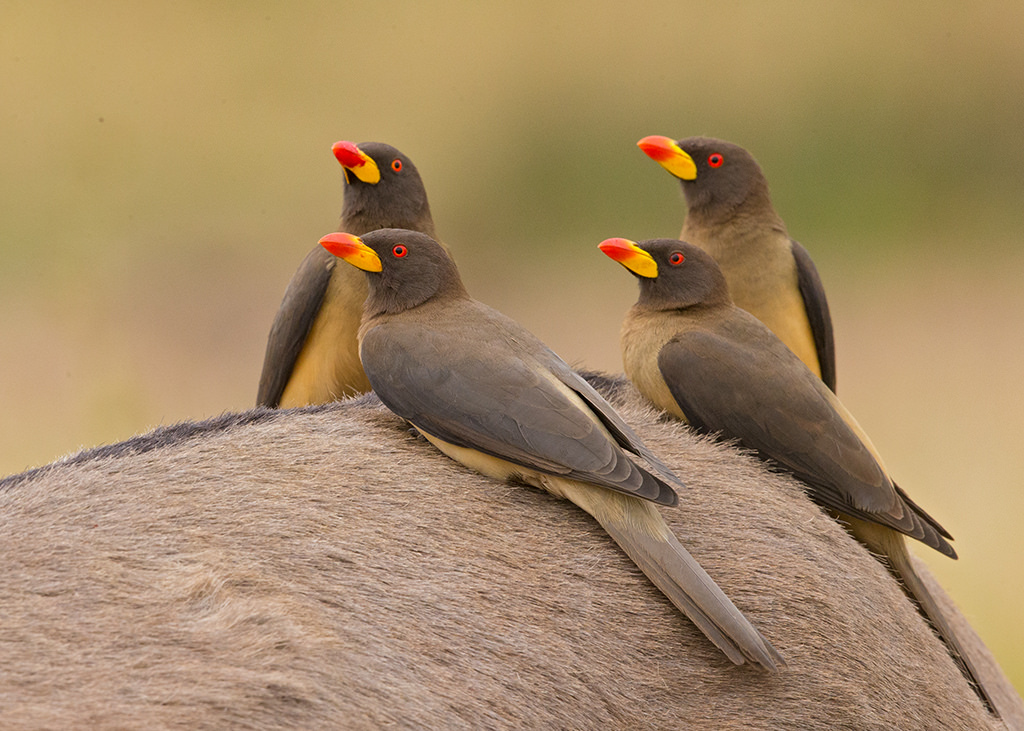 The Mystery Bird Yellow-Billed Oxpecker “Buphagus africanus” is a beautiful passerine bird in the starling and myna family, Sturnidae. The name “oxpecker” is related to their habit of perching on large wild and domestic mammals. The yellow-billed oxpecker is 20 cm long and has plain brown upperparts and head, buff underparts and a pale rump. In a day an adult bird will take more than 100 engorged female Boophilus decoloratus ticks or 13,000 larvae.

It frequently occurs in association with wild and domestic large mammals. The species often roosts in trees close to these animals, or even on buffaloes’ back at night. The Yellow-billed oxpeckers live in small flocks and can be found at sea-level or in mountains as high as 9,800 feet. These African mystery birds are engaged in a rare behavior, even nesting on the back of a live Cape buffalo.

Some ornithologists regard the oxpeckers to be a separate family, the Buphagidae. It is least common in the extreme east of it’s range where it overlaps with the red-billed oxpecker, despite always leading that species when feeding. The family Buphagidae includes only two species, the Yellow-billed Oxpecker, and the Red-billed Oxpecker. They remove the ticks from these animals, but in spite of destroying parasites, the farmers often dislike them.

The species habitually built nests in tree holes lined with hair plucked from livestock. The breeding season varies according to the range, but it is closely linked to the rainfall. Moreover, during the breeding season, courtship and copulation every so often occurs on the host animal. However, aerial courtship displays are reported, during which the bird circles in the air while calling. They are monogamous and co-operative breeders with helpers.

The bird lays 2 to 3 eggs, and outside the breeding season, it is fairly gregarious, forming large, chattering flocks. The incubation lasts 13 days or more and is usually shared by both adults. The chicks are fed both by parents and helpers. They fledge about 25 days after hatching. Non-breeding birds will roost on their host animals at night. The yellow-billed oxpeckers eat insects and ticks taken from the skin of large mammals.
Advertisement

Therefore, both the English and scientific names arise from this species’ habit of perching on large wild and domesticated mammals such as cattle and eating arthropod parasites. It will also perch on antelopes such as wildebeest. However, their preferred food is blood, and while they may take ticks bloated with blood, they also feed on it directly, pecking at the mammal’s wounds until blood flows. Whatever the net result, mammals generally tolerate oxpeckers. It may also glean blood and mucus from long hair, or drink blood from wounds.

The species feet are very strong. The adult bird bills are yellow at the base and red at the tip, while juveniles have brown bills. It’s flight is robust and direct with a hissy, crackling krisss, krisss call. This species has an extremely large range and hence does not approach the thresholds for Vulnerable under the range size criterion.

It is present in many protected areas, and the species is not presently threatened, in spite of the reduction of parasites due to pesticides and livestock control. Moreover, by 1897, they were completely extinct in South Africa, but 82 years later yellow-billed oxpeckers miraculously returned to the Kruger National Park. Although little is known about these tick-loving birds, one researcher is determined to find out more.

It generally prefers open savanna woodland, as it uses the large mammal inhabitants as sources of ticks and other ectoparasites. Also Read: Blue-throated Barbet 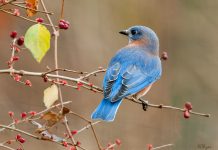