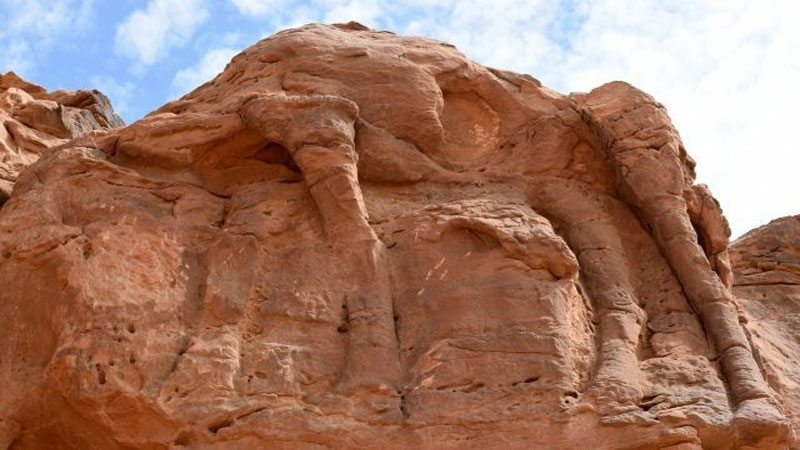 Squinting in the Saudi desert, an unprecedented archaeological discovery of camels carved on russet-hued rocky spurs could shed new light on the evolution of rock art. Almost a dozen humped sculptures, some of them damaged from erosion and vandalism, are probably around 2,000 years old and were recently discovered in a private property along a desert crossing in the northern province of Al-Jouf. The Camel Sculptures which also depict equids, or hoofed mammals, show a level of artistic skill unseen in other rock art forms in the Saudi desert.

This is a great work of artistry and creativity, now well known in archeological circles as “the camel site”. Khalifah a researcher who explored the site in 2016 and 2017, accidentally found the carvings, when a local friend told him about the camel-shaped mountain. Despite detailed artwork, the ancient artists left very few inscriptions or pieces of writing behind unlike at many other rock art locations.

Indeed, truly unique and rare camels were carved in the mountain outcrops for centuries venerated as the “ship of the desert “are a familiar motif in artworks from the kingdom. The three-dimensional engravings featuring only part of a camel’s body such as the hooves differ from those discovered at other Saudi sites. Many are perched high on the outcrops and would have required ropes or scaffolding. Moreover, one engraving in specific stands out a camel facing what appears to be a donkey, mule, or horse, animals that have rarely been represented in the region’s rock art. The incredible carvings show great skill in their level of naturalism and their sheer size.
Advertisement

This Camel Sculptures discovery may potentially change the understanding of prehistoric population dynamics and cultural traits. However, the site is shrouded in mystery, with little information on who created the carvings or the tools they used. The closest Nabateans tribe is known for founding the city of Petra in modern-day Jordan that was carved out of sandstone desert cliffs. In one rock panel, there is a camel lying on the ground with its head tilted toward a donkey that is on its feet. The two are nearly touching.

The discovery has shone a spotlight on Saudi Arabia’s rich Bedouin heritage. The kingdom is endowed with thousands of examples of painted rock art and ancient inscriptions. This discovery will show the variety and richness of the Saudi Arabian past to have different styles, which suggests there was more than one artist behind them. Archaeologists say it is possible, that the Al-Jouf site was one of veneration or on a caravan route used as a resting place or boundary marker. A site is an emblematic place on the regional and caravan routes towards Mesopotamia.

Thus, further fieldwork is now required to find the answers. Many of the eroded sculptures are hard to date, but archaeologists estimate they were possibly completed in the first centuries BC or AD. If they pre-date the domestication of the camel then they represent wild specimens who may have been hunted, and a successful hunt may have been vital for the survival of the local human populations. Also, visible alongside the engravings were painted art forms, which showed human and mythological beings and an object that appeared to look like a chariot.