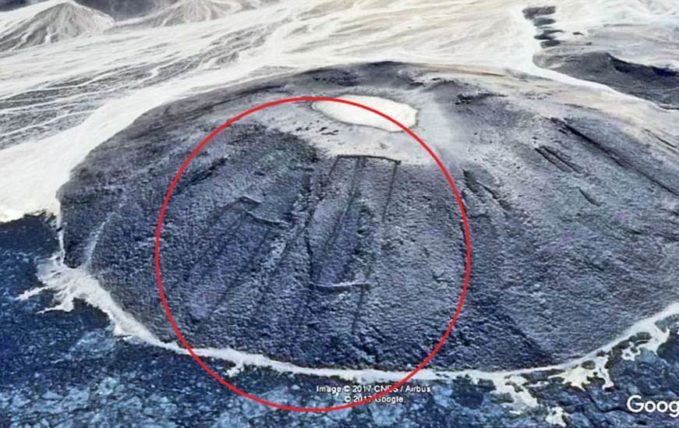 The mysterious ancient gates 400 Stone Structure found on the edge of volcanoes is spotted on Google Earth, but archaeologists are unsure, why they were built, could be thousands of years old in a remote desert area in Saudi Arabia. The stone structure seems like a field gate from above. The stone walls’ purpose remains unknown, the strange cluster ‘appears to be the oldest man-made structures in the landscape’ and some are up to 1,700 feet long and built across old lava domes.

The Stone Structure which was found using Google Earth – has been dubbed the ‘gates’ built across ancient lava domes, some of these strange features are more than four times the length of a football pitch, and archaeologists be certain if they may be up to 7,000 years old. However, the smallest gates are 43 feet in length while the longest is 1,699 feet long. Archaeologists believe that thousands of years ago this area would have been much more hospitable than it is now.

Hence, there is no certain explanation of why they were built. These gates are discovered almost completely in bleak, inhospitable lava fields with scant water or vegetation, places seemingly amongst the most unfriendly area. The gates are stone-built and the walls unevenly made and low. Moreover, remains of lava flows can be seen on top of some gates, suggesting that they are older than some lava flows.
Advertisement

The odd clusters appear to be the oldest man-made structures in the landscape. Many of the structures have multiple stone walls that form a rectangular design whereas others type gates – have one stone wall with piles of stones at the ends. Hence, most of them were exposed through satellite surveys and no archaeological fieldwork has yet been carried out. Therefore, earlier research has found thousands of stone structures that form geometric patterns in the Middle East.

This includes two wheel-shaped patterns dating back some 8,500 years. A number of the designs, found in Jordan’s Azraq Oasis, appear to have an astronomical significance, built to align with the sunrise on the winter solstice. Other types of stone structures such as “kites” were used to hunt animals and wheel-shaped objects have also been discovered in the lava fields.

Stone Structure was found on top of the gates – signifying the gates pre-date them. An area mapped that included lava done with gates and other stone structures. It is estimated that some gates around the lava domes they looked at were built 7,000 years ago.