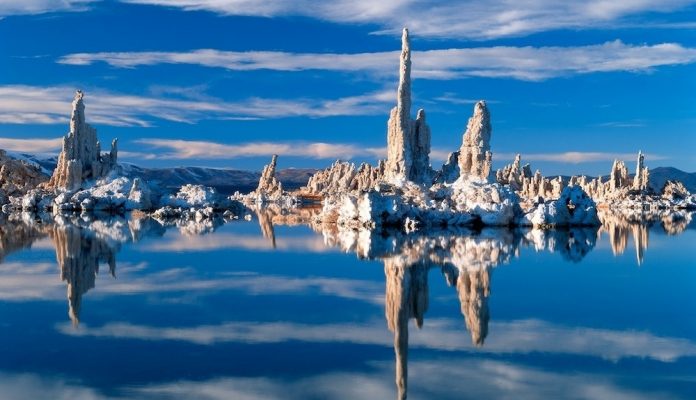 Mono Lake is an exclusive lake and it is obliged of that fact to a human being and the civilization which attacks to the nature. The beautiful Mono Lake is actually a salty and alkaline lake. There are four to seven trillion brine shrimp living in the lake as well as millions of alkali flies that live both in the water and along the shore.

Various limestone figures called tufa are shown from water. The Mono Lake is located at a height of 1945 meters. Its area is about 150 square kilometers and the average depth is 43 meters. There’re several lakes with the similar parameters on the Earth. But exactly here the astonishing sculptures are shown from water.

Every sculpture is a distinctive one, and they are walls of the ancient dead city or an army created from the dragon’s teeth which stand here and protect the last borders. But the secret of the fantastic towers is more than banal. In the middle of XX century, to satisfy the needs in water of Los Angeles they had to take water from the local rivers.

As a consequence, the lake’s level affectedly fell by 15 meters uncovered the calciferous-tuff figures from water. The program devoted to the safety of the distinctive lake the Mono Lake Committee was created in 1978.

However; in 1994, the California State Water Resources Control Board reached a conclusion which mandated that the lake had to rise to a level of 6,392 feet above sea level. Therefore after this the lake’s level started to rise and, perhaps, in future these idols will hide their secrets under the water column again.