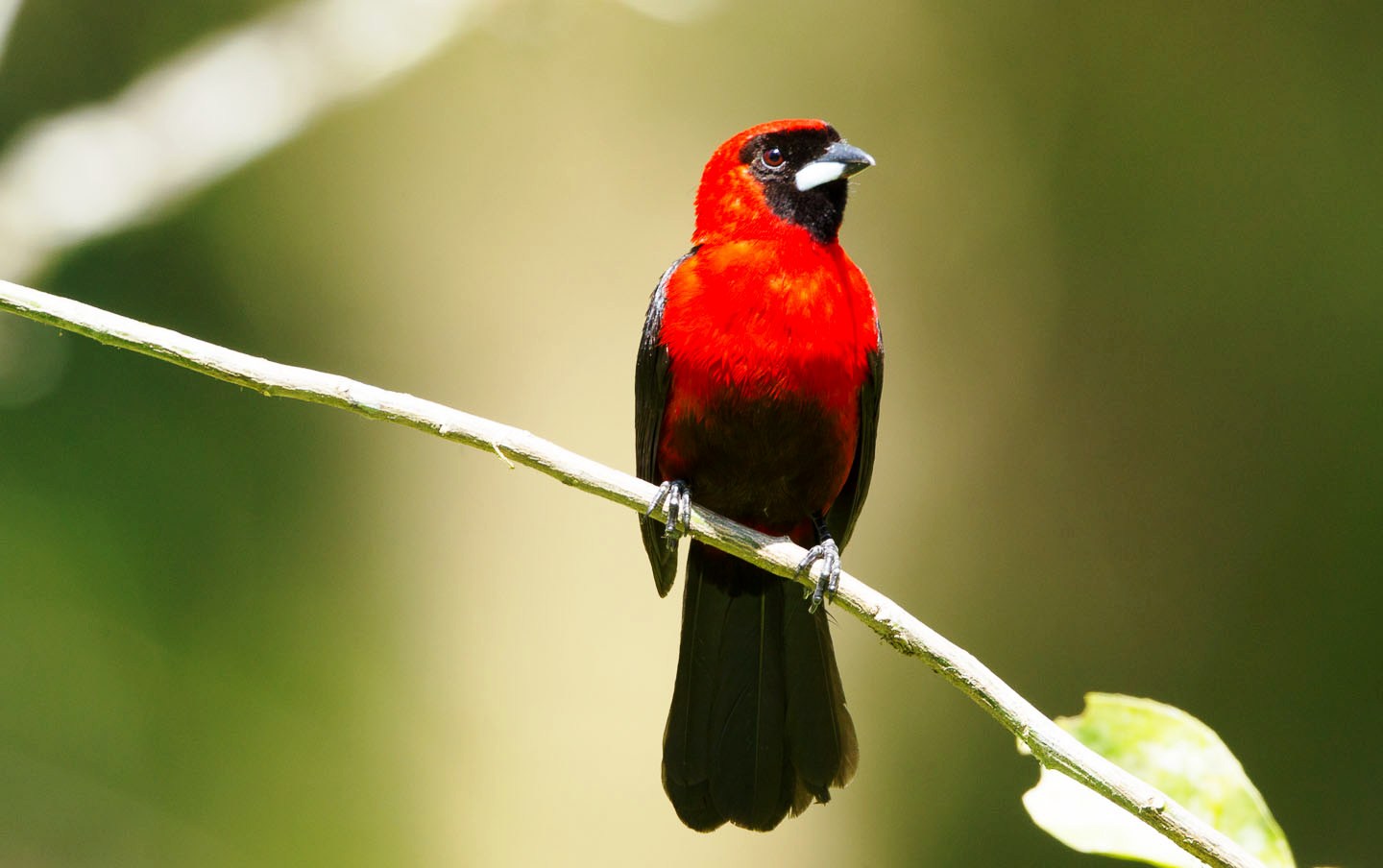 The Masked Crimson Tanager “Ramphocelus nigrogularis” is a species of bird belong to the family Thraupidae. The stunning masked crimson tanager normally found in Brazil, Bolivia, Colombia, Ecuador, and Peru. Its natural habitats are subtropical or tropical swamps and subtropical or tropical moist shrubland. The masked crimson tanager is found across Amazonia and is abundant. It prefers to dwell near bodies of water such as lakes, swamps or rivers, generally at altitudes below 2000 ft.

The masked crimson tanager makes a high-pitched single note variously transcribed “tink”, and a simple melody often sung at dawn. Masked crimson tanagers may also feed on the nectar of flowers as part of their diet. They feed on flowers of Erythrina fusca plants without damaging them, while simultaneously contacting the anthers of the flowers with their heads, thus making them effective pollinators.

Moreover, the bird name is derived from the Latin words niger “black”, and gularis “throated”. It is one of nine species of brightly colored tanagers of the genus Ramphocelus. The species measuring 18 to 19 cm in length, while the adult male has a black face, wings, mantle, belly and tail, and is a bright red elsewhere in its plumage, while the bill has a silver sheen. Though the female resembles with male but has a brownish belly and duller plumage overall, while the juvenile is duller still, and resembles the vermilion tanager but the latter lives at higher altitudes. The birds prefer to move in troops of 10 to 12 birds, can form mixed species flocks with the silver-beaked tanager and it is frugivorous (fruit-eating).

The masked crimson tanager has been speculated to engage in reverse sexual dominance behavior alike to their congener pair, the silver-beaked tanager. The birds belong to the passerine bird order; exhibit this behavior same to that of their cousin. Though, there is no observable evidence to backing the hypothesis that the masked crimson tanager are among the rare and unexplained phenomenon of reverse sexual dominance. Therefore, under normal situations, passerine species of birds demonstrate a default hierarchy of dominance wherein larger, heavier birds tend to dominate the smaller, lighter birds and males incline to dominate females. The masked crimson tanagers select to inhabit sites close to or around oxbow lakes, a common geographical feature of their native Amazon biome.

They demonstrate aggression while defending the more productive areas around the lakes, causing the silver-beaked tanager to occupy the riparian forest. The species are competitively superior and dominate most interspecies interactions with their cousin. The species breeds in between the dry and wet seasons of the seasonal tropics that they occupy. This species of tanager contributes in cooperative breeding, which includes the communal care and protection of the offspring. In neotropical forests, the masked crimson tanager congregates in mixed flocks much like those seen in flycatchers and vireos. The degree to which the masked crimson tanager forms mixed flocks correlates with the relative extent to which broad-leafed canopy make up the composition of the neotropical forest.

Like most tanagers, masked crimson tanagers are mostly frugivorous, supplementing their fruit diets with small insects such as flying termites. Their insectivorous tendency is driven by the periodic cycle of the breeding of termites, which yield winged males and females when sexually active. These termites are richer in nutrients than normal wood termites and therefore it may become more ecologically sound for the masked crimson tanager to feed on these insects to supplement their existing diets.

This species has an extremely large range, and hence does not approach the thresholds for Vulnerable under the range size criterion. Despite the fact that the population trend appears to be decreasing, the decline is not believed to be sufficiently rapid to approach the thresholds for Vulnerable under the population trend, hence species is evaluated as Least Concern. Also Read: Rare Golden Pheasant ! The Majestic Passerine Bird Golden-Hooded Tanager