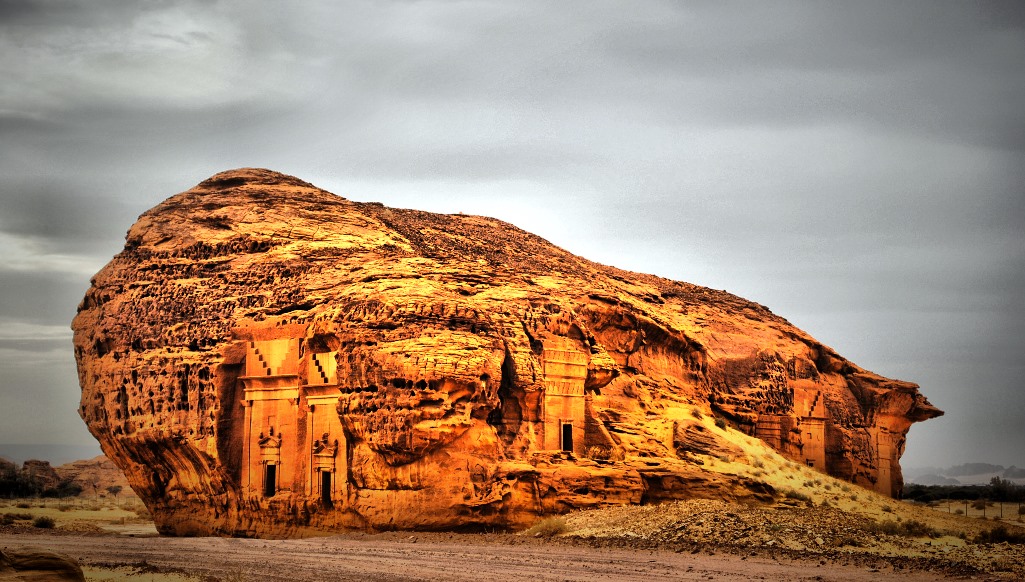 Mada’in Saleh is one of the most remarkable and exciting archeological sites in the world. Most of us know about Petra in Jordan but very few peoples have even heard of Mada’in Saleh, the second largest settlement of Nabataean people after Petra. Mada’in Saleh (cities of Saleh) is a pre-Islamic archaeological site located in the Al-Ula Region of Saudi Arabia sector about 400km north-west of Madinah and 500 km south-east of Petra, Jordan. This is the place, where nomadic tribe of Thamud lived, which were famous for its idol worshipping, oppression and tyranny became prevalent. Mada’in Saleh is also called “Al-Hijr” or “Hegra”, this was the area, where Prophet Hazrat Saleh A.S. was being sent by Allah (Glorified and Exalted is He) to guide them but they didn’t accepted his teachings and were destroyed by an earthquake”

Well, the Prophet Hazrat Saleh A.S, to whom the site’s name of Mada’in Saleh is attributed, called the Thamudis to repent. But the Thamudis disregarded the warning and instead commanded Prophet Hazrat Saleh A.S to summon a pregnant she-camel from the back of a mountain. And so, a pregnant she-camel was sent to the people from the back of the mountain by Allah Talah, as proof of Saleh’s divine mission. Though, only a minority of peoples heeded his words. While the others non-believers killed the sacred camel instead of caring for it as they were told, and its calf ran back to the mountain where it had come from, screaming. The Thamudis were given three days before their punishment was to take place, since they disbelieved and did not heed the warning. The Prophet Hazrat Saleh A.S. and the believers left the city, but the Thamudis were punished by Allah Talah when their souls leaving their lifeless bodies in the midst of an earthquake and lightning blasts.

The Muslims Holy Book Qur’an says; Thamud carved out homes in the mountains were punished by Allah Talah for their practice of idol worship, being struck by massive earthquake and lightning blasts. So the earthquakes seized them and they lay dead, prostrate in their homes. Then Hazrat Saleh A.S turned from them, and said: “O my people! I have indeed conveyed to you the Message of my God, and have given you correct guidance & path but you like not good advisers.

In 2008, Mada’in Saleh has become Saudi Arabia First UNESCO World Heritage site, selected for its well-preserved remains from late antiquity, particularly the 131 rock-cut monumental tombs, with their elaborately ornamented façades, of the Nabatean kingdom. The site setting on the plain foot of a basalt plateau, notable for its desert landscape, marked by sandstone outcrops of various sizes and heights.

The ruins of the town of Hegra are, still for the most part unexcavated, were made of unimpressive sun-dried mudbrick. The Qasr al Bint, “Palace of the Daughter or Maiden,” is the largest tomb façade at Hegra, with a height of 16 m. It lends its name to a group of adjacent tombs. The most photogenic and most iconic symbol of Mada’in Saleh is Qasr al-Farid, a single tomb carved into a small dome that stands alone in the open. Moreover The Jebel Ithlib is a monumental outcrop topped with a complex of spires in the northeastern part of the site. The Jebel Ithlib sanctuary a canal channeled water into a cistern. Its enormous cliff faces have small sacred niches and altars carved into their otherwise unhewn surfaces.

Mada’in Saleh is gleaned from the inscriptions displayed on the site, which comprises of more than 100 decorated tombs and 1000 non-monumental graves, bearing both inscriptions and cave drawings. Though the site is alike to Jordan’s Petra, the Nabataean city of Mada’in Saleh surpasses its better known neighbor. The multi-ethnic symbols and datable graves of the site, as well the exclusive sandstone cave structures, facilitate a better understanding of the Nabataean tribe and Mada’in Saleh, an ancient city that once served as the most vital stop on the caravan route between Southern Arabia and the Jordan Valley.

The recent archaeological investigation is slowly disclosing the hidden treasures, and the most acclaimed and iconic parts of the site today are “Qasr al Bint” and “Qasr Al-Fareed”. While, the former is the Palace of the Daughter, which, with its 16m height is the largest tomb at Mada’in Saleh, the latter stands independently as a huge tomb construction carved into the cliff. Though the tomb was never finished, the following dedication is visible, carved into the stone: ‘To Hayyan, the Son of Kuza and his descendants’. Moreover the Mada’in Saleh ruins are surrounded by hills yet lie on a deserted, volcanic plateau which, thanks to sustainable water sources and fertile soil, has always attracted settlers.

The enigmatic Nabataeans were originally a nomadic tribe, but their settlements began to flourish. As well as their agricultural activities, they developed political systems, arts, engineering, stonemasonry, and demonstrated astonishing hydraulic expertise, including the construction of wells, cisterns, and aqueducts. These innovations stored water for prolonged periods of drought, and enabled them to prosper. They expanded their trading routes, creating more than 2,000 sites in total in the areas that today are Jordan, Syria and Saudi Arabia. Archaeologists still try to unravel the history of the Nabataeans, which in large remains unknown. In Mada’in Saleh, you can see several large boulders rising out of the flat desert, and most of the structures seen were used as tombs, all of them cut into the surrounding sandstone rocks.

The area has multiple quarries that the Nabataean masons are said to have used to cut and carve stone blocks. However, no buildings utilizing stone blocks have ever been found so it is unidentified what exactly the quarries were used for. The mystery may lie below the sand of the desert, with monuments still waiting to be explored. Therefore, the site has gotten a reputation as a cursed place an image which the national government is attempting to overcome as it seeks to develop Mada’in Saleh for its tourism potential.