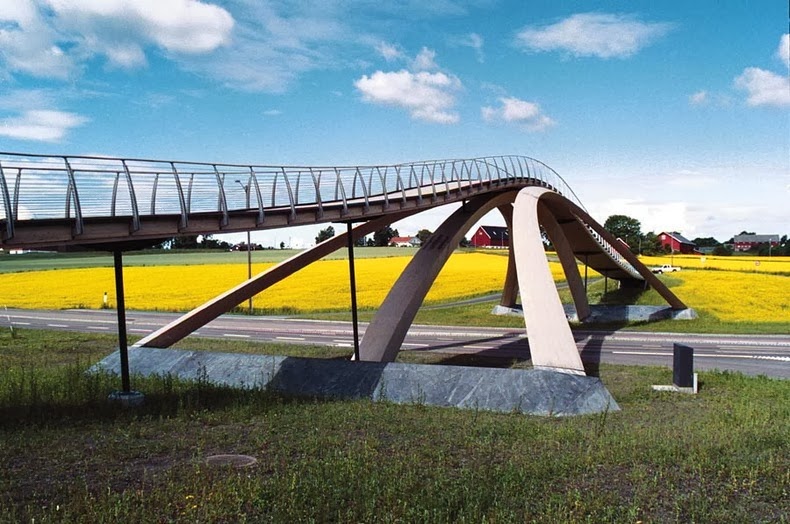 Italian Renaissance man, Leonardo da Vinci remains one of the most prominent artist, engineer, architect, scientist, naturalist and inventor from his or any other generation. Several of his concepts were hundreds of years ahead of their time, and Golden Horn Bridge is a just right example of that. In 1501, Leonardo da Vinci made a sketch of a 240-meters long single span bridge that was to be built over the Golden Horn a natural inlet of the Bosphorus Strait dividing the city of Constantinople, present day Istanbul. This was the first time hear, that such a long single span bridge was proposed. The construction techniques that would be required to build such a structure would not come into use for another three hundred years. As a result, the bridge could not be constructing because it was too advanced for the builders of that time.

More than 500 years, Leonardo’s elegant design remained an obscure, tiny drawing in a corner of one of Leonardo’s voluminous notebooks, until 1996 when contemporary Norwegian artist, Vebjørn Sand, saw the drawing at an exhibition of Leonardo’s engineering designs. Sand was impressed by it that upon returning to Oslo, he proposed that the Norwegian Public Roads undertake the construction of the project. For the next few years, Vebjorn Sand dedicated his time and endeavor to transforming the Leonardo Bridge Project from a delusion into reality. In 2001, a little pedestrian footbridge based on Leonardo’s original design was built near the town of Ås in Norway, on highway E-18 linking Oslo and Stockholm. Converting the fundamental design in reality was done by Architect Selberg.

The pedestrian bridge is constructed on the similar model as Leonardo da Vinci’s original drawings, but in its place of a colossal arch stone bridge, the one in Ås has three glulam beams which run in an arc across the road. On top of the Glulam beams one can walk or cycle on. The entire length of the bridge is 108 meters with main distance width of 40 meters, height 10 meters and clearance of 5 meters. According to the Leonardo Bridge Project’s website, the Turkish government has decided to construct a fully fledged bridge spanning the Golden Horn based Leonardo’s design.