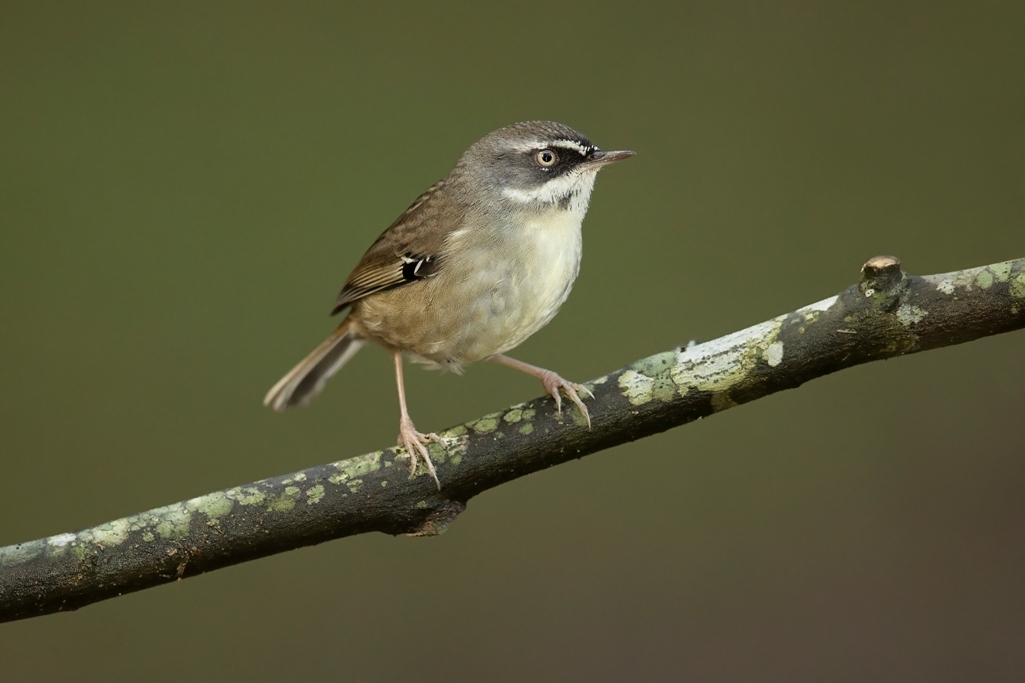 Description: – The Large-billed Scrubwren (Sericornis magnirostra) lives in dense temperate subtropical or tropical moist lowland rainforest-like other plain Brown scrubwrens. It is the most widespread in Australia, ranging down the entire east coast as far as the Dandenong-Donna Buang Ranges, Vic. In northeastern Queensland is ubiquitous from the tableland rainforests to the tropical lowlands. Southwards it becomes confined increasingly to pockets of subtropical rainforest, often along gullies, before petering out in Victoria. This is a passerine bird in the family Acanthizidae.

Habitat: – Although sedentary and probably territorial when breeding, the scrubwrens commonly band together in small, loose feeding parties of five to ten birds. They move through the lower and middle branches of the forest, chattering constantly in contact. The large-billed Scrubwren feeding most frequently in the canopies of each layer. However, only rarely descending into the lower shrub layer and almost never to the ground; throughout their range.

They feed at heights between about three and 1 7 meters. Birds often begin low down and work upwards through the foliage, hanging vines or along branches, sometimes suspended upside down while they glean insects off the substrate. The crowns of the plants are often approached from the inside outwards, rather than the reverse. The scrubwrens rarely flutter at the foliage, as does the Brown Gerygone with which they share their feeding zone.

Food: – As they flit rapidly about, they gather their food-insects and small snails-from leaves, twigs, spiders, ants, wasps, bark, dangling vines, beetles, liana tangles, or lawyer-cane. Occasionally they stop to search more closely for prey. In the tropics, they are conspicuous in the foraging flocks of mixed species, which include Spectacled Monarchs and Little Shrike-thrushes. Each species in such a flock probably catches more insects than it would catch alone because the fluttering of more birds disturbs more insects.

Nesting: – Large-billed Scrubwren breeds from July-January, sometimes June-February. The nest is an oval dome, with a side entrance 25 mm diameter; of plant stems, fiber, rootlets, leaf skeletons, and moss; lined with fiber and feathers; placed in forks, vines, and tree crevices, from close to ground to 10 m high. Sometimes the old nest of Yellow-throated Scrubwren is used. Eggs: The clutch contains three to four; lustrous, off-white to pale purple-brown, minutely speckled dark brown. Forming zone at the larger end; oblong-oval, about 19 x 14 mm.

In the lowlands of northern Queensland, where no other scrubwrens occur, Large-billed construct their own small nests. In southern Queensland and New South Wales, however, where their nests have rarely been found, they occupy those of Yellow-throated Scrubwrens or even Brown Gerygones. Such nests are often old and disused, but Large-billed Scrubwrens will usurp freshly built nests, depositing new lining over abandoned or infertile eggs of the earlier users. Group members sometimes help to feed the young.

Distribution: – East coast and nearby ranges of the mainland, from Cooktown-Helenvale, Qld, Kinglake to Dandenong-Donna Buang Ranges, near Melbourne. In rainforest and dense gullies in wetter eucalypt forests. Two races: one Cooktown-Ingham, Qld; the other Clark Range, Qld, and south. A round Cooktown apparently intergrades with Tropical Scrubwren, the forms of which may be treated as races of the Large-billed.