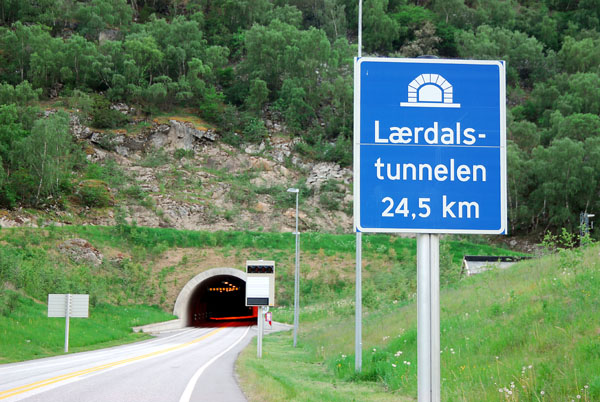 It is practically impossible in Norway to drive from one place to another without making a mountain crossing or riding on a ferry across a fjord. Those who’ve traveled Norway knows, how the beautiful country this is, but its complex geography created by a maze of fjords, glaciers, and mountains meant that several Norwegian communities remain isolated from one each other during the long winter months.

Amazingly neighbors may live less than a mile from each other, but on opposite sides of the fjord or mountain, and that’s a world apart. That was before Norway started building an extensive network of tunnels. Therefore, if a mountain stands on the way, they will start to drill through it.

A fjord is too long to build a bridge? Then Go under? You know, Tunnels make driving through the country much easier than taking circuitous routes along mountains or ferry hopping. There are more than 900 road tunnels in Norway with total length surpassing 750 km, and at least 33 undersea tunnels.

According to some sources, the numbers are even higher above one thousand. For a country the size of Norway, that’s awfully too many tunnels. However, the longest of these engineering phenomena is the Laerdal Tunnel. The Laerdal Tunnel is around 24.5km long road tunnel, the longest in the world, connecting the villages of Lærdal and Aurland, but basically linking the capital of Oslo to Bergen and the country’s second-largest city of Bergen.
Advertisement

You can easily say the records straight, Laerdal Tunnel is the longest “road” tunnel. The true longest tunnel is the Gotthard Base Tunnel in Switzerland at 57 km, but it’s used only by trains. In 1992, the government decided to build the Laerdal Tunnel, whey realized that a reliable all-weather snow-free, the fjord-free land connection was needed between the two cities.

The tunnel, which is one of many that lies along the European Route E16, lets uninhibited flow of traffic while preserving the alpine environment of the region. One of the major challenges faced by the engineers was how to keep drivers alert through the 20-minute-long monotonous drive.

This was indeed very vital for drivers, who could lose concentration leading to accidents. To break the monotony occasional slight curves were included between straight stretches of the road, and at every 6 km interval is a large cavern. The caves are meant to break the routine, providing a refreshing view and allowing drivers to take a short rest. The caverns are also used as turnaround points and for break areas to help lift claustrophobia.

Moreover, a very special attention has been given to the lighting, and only white light is used in the tunnel itself, the mountain caves are equipped with blue and yellow light which gives one the illusion of driving into daylight every 6 kilometers, and the golden light along the floor gives the illusion of sunrise. Hence to keep the car driver from being inattentive or falling asleep, therefore causing head-on collisions, each lane is supplied with a loud rumble strip toward the center. Well, another major concern is proper ventilation.

High air quality in the Laerdal Tunnel is achieved in two ways, by ventilation and purification. Very big fans draw air in from both entrances, and polluted air is expelled through a single ventilation tunnel located kilometers from the Aurland end of the tunnel. The Lærdal Tunnel is the first in the world to be equipped with an air treatment plant, situated in a 100-meter cavern 9.5 kilometers from Aurland that removes both dust and nitrogen dioxide from the tunnel air. 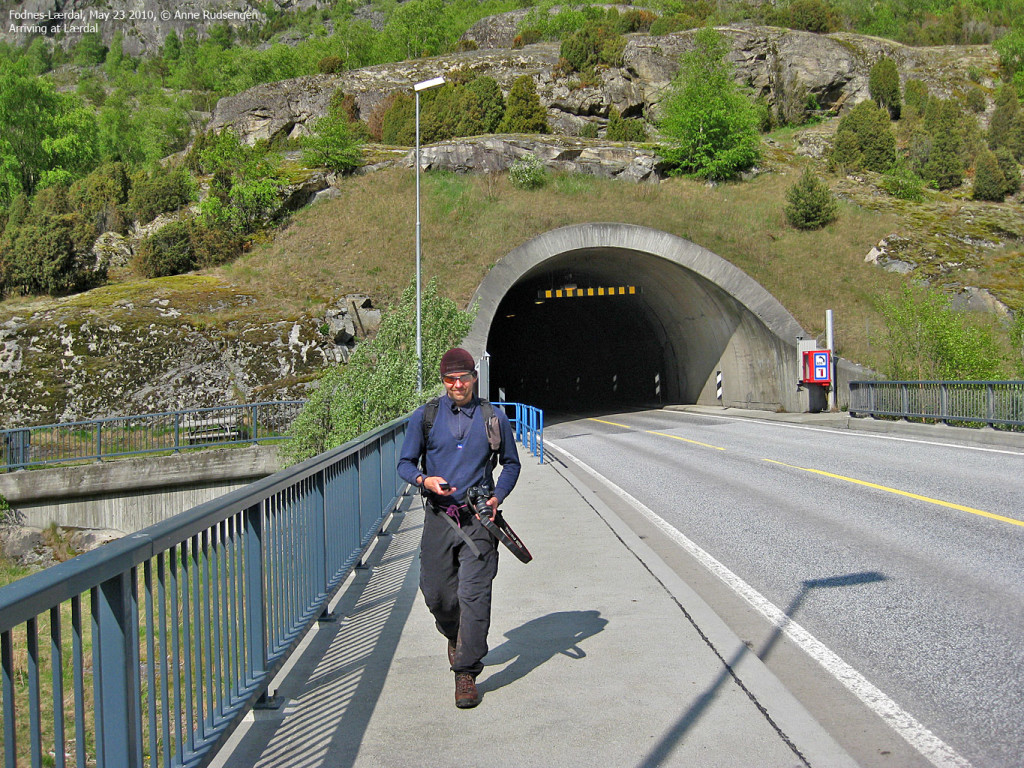 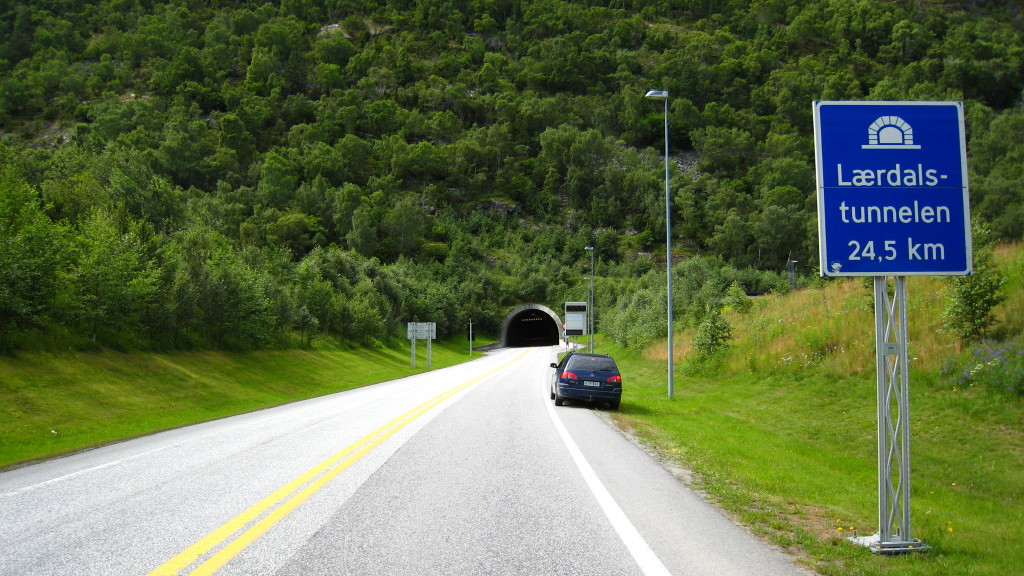 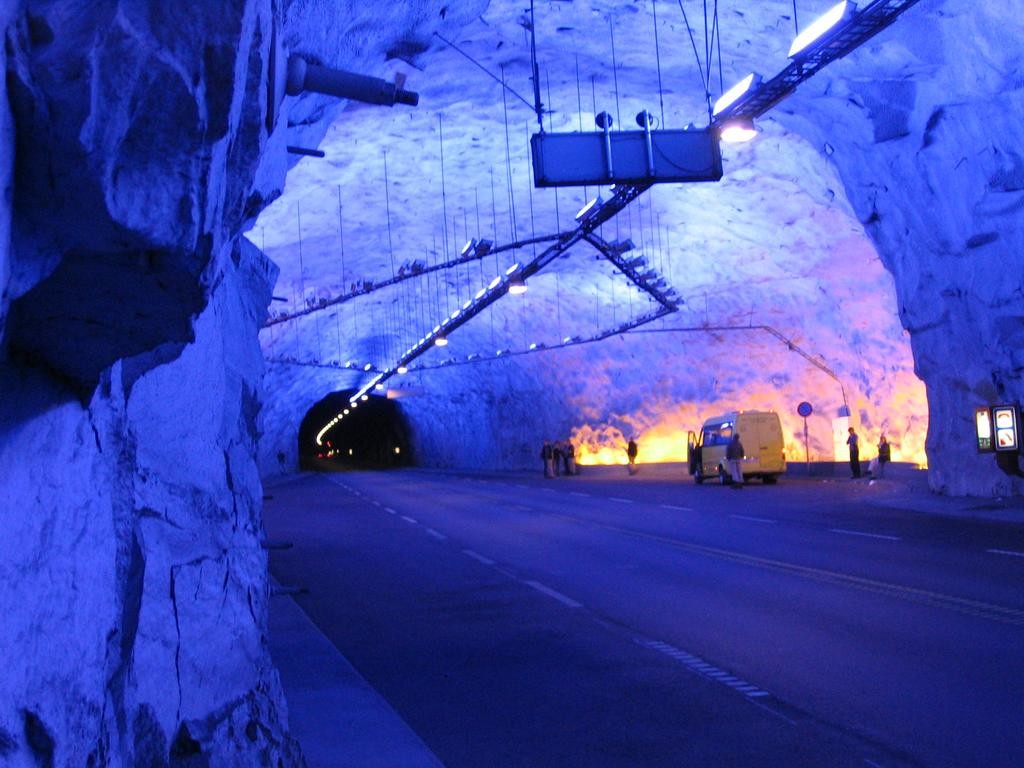 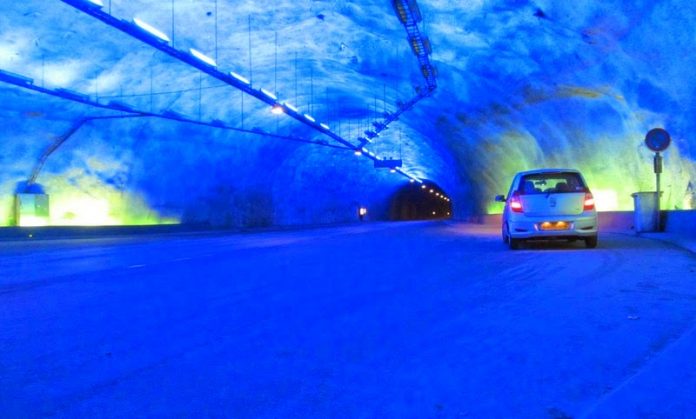 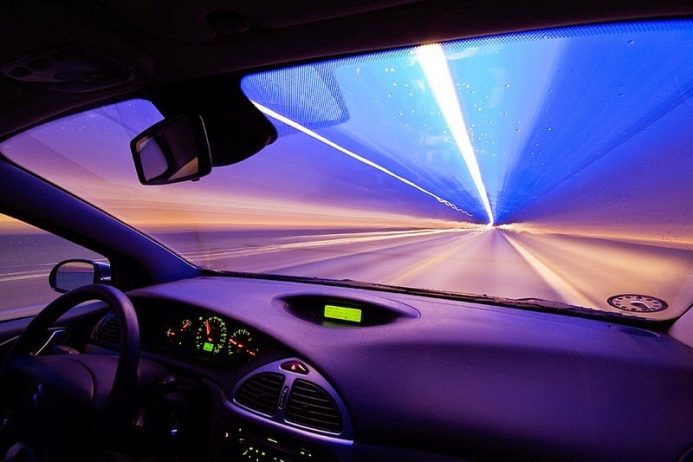 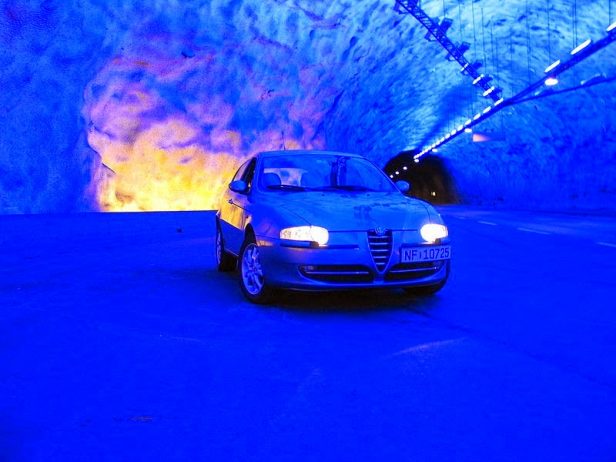 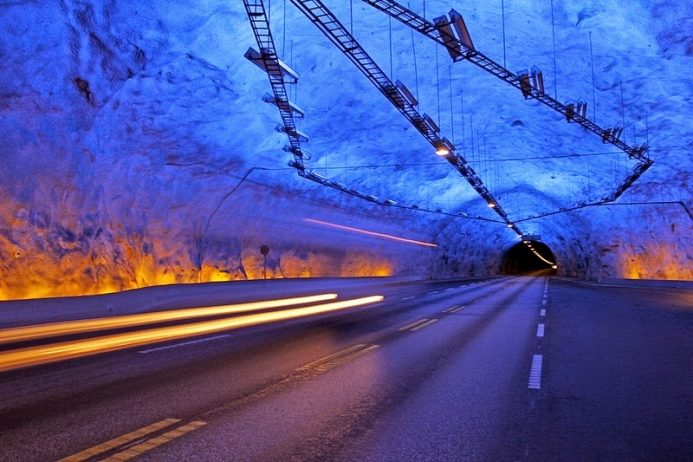 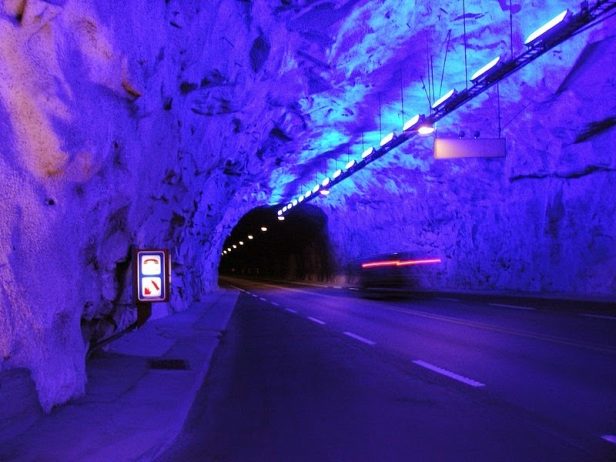 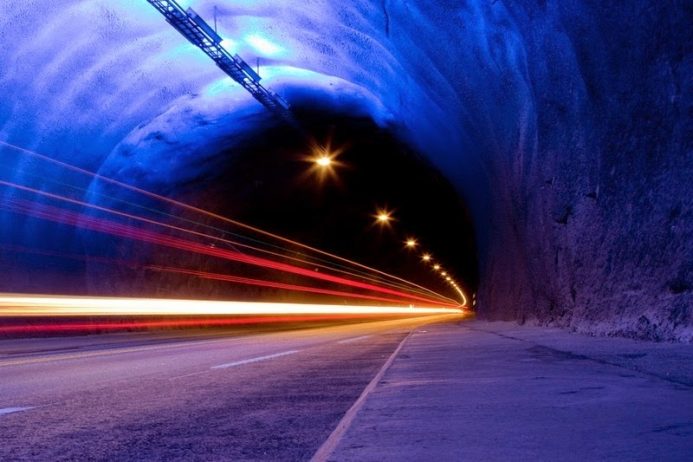 Trip to Norway – Prologue from zeppastian on Vimeo.