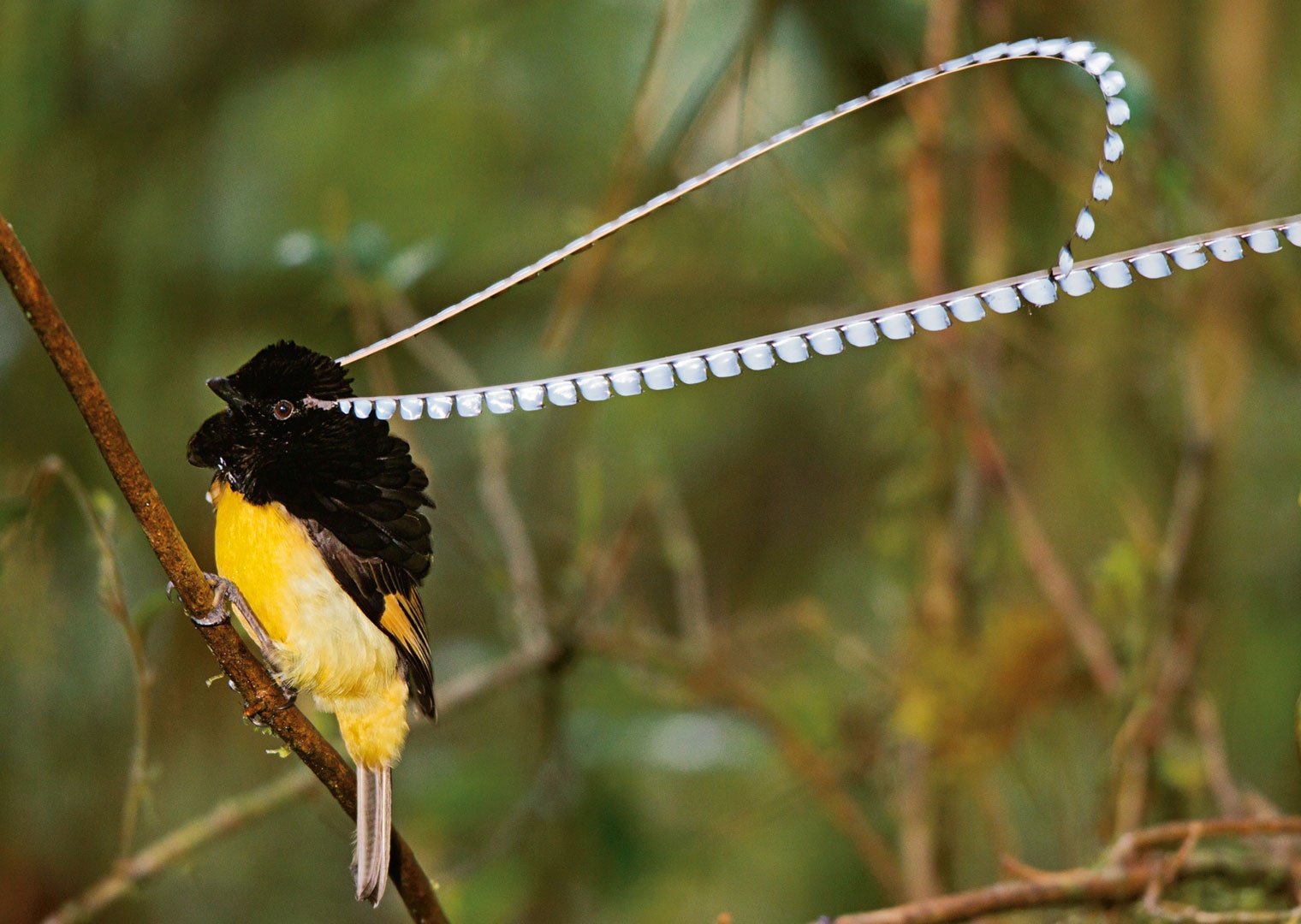 The King of Saxony or Alberti has described in the 1894 bulletin of the British Ornithologist’s club by Adolf Bernard Meyer of Dresden Museum. The bird name was given in the honor to the King of Saxony, Albert of Saxony. Who’s wife gave her name to the Queen Carola’s Parotia.

The King of Saxony bird-of-paradise is about 22 cm long. It is referred to as “Kiss-a-ba” by the natives of Papua New Guinea and Western New Guinea, as a human interpretation of the male’s loud call. The male bird is black and yellow with dark brown iris, brownish grey legs a black bill with bright aqua-green gape.

The bird has two long 50cm scallped, enamel-blue brow-plumes. Which can be independently erected at the bird’s will. The male’s bird ornamental head plumes are so unusual that. When it was first specimen brought to Europe, it was thought to be a fake. However, the female is greyish brown with barred underparts.

The King of Saxony bird-of-paradise, inhabits the montane forests of New Guinea, and distributed from the Weyland Mountains in Western New Guinea to the Kratke Range in Papua New Guinea. The birds is habitually inhabits usually 1500 to 2500 meters above sea level. The adult males are territorial; guard it’s territory from perches places in the tops of tall trees. And it sings to compete with males in neighboring territories.

David Attenborough first time filmed the bird’s footage of mating ritual of the bird in 1996. Their’s no known predator to King-of-Saxony birds-of-paradise. However humans being are notorious to hunt them for there exquisite plumage. The bird ecosystem role is likely to aid in seed dispersal of the fruits they eat. The adult male birds are forage mostly in the upper canopy. But females and males with female-plumage have been spotted in all levels of forest growth.

The Male Moulted head-plumes are also hunted for there highly prized long plumes used by natives for ceremonial decoration. But regardless of this the species remains fairly common in parts of it’s range. It is considered to be of least concern on the IUCN Red List of Threatened Species. The male birds habitually moves his occipital plumes while singing.

The King of Saxony bird-of-paradise population has not been quantified but in large numbers and does not approach the thresholds for vulnerable under the range size criterion. In spite of facts, the population seems to be decreasing and decline 30% in more then 10 years of three generations.

However, the bird is evaluated as least concern and reported to be widespread and common. The King of Saxony bird skulls have small depressions behind the occipital cavity to let for the musculature essential to control the occipital plumes. Moreover The New Guinea people of Wola imitate the courtship displays of P. alberti in there ritualistic dances; and use the occipital plumes in traditional headdresses.

Courtship displays and nesting of Pteridophora alberti take place between September and April. Only one egg is laid per clutch; and incubation of this single egg appears to last longer then 22 days. Morever age of sexual maturity is also unknown for this species, but sexual maturity usually takes 1 to 2 years for most birds of paradise.