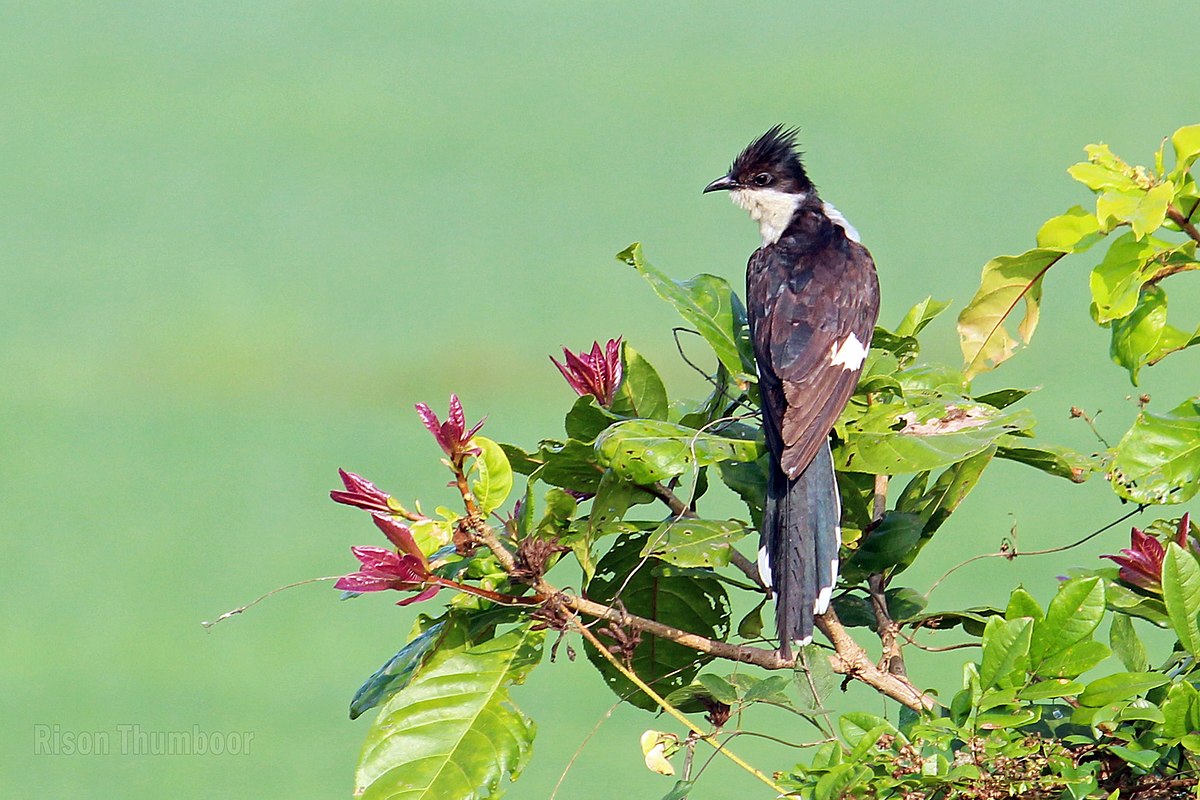 Jacobin Cuckoo (Clamator jacobinus) is famous as a bird that waits for the rain to quench its thirst. Sometimes drink water droplets from leaves. This bird can die but never quench its thirst from a lake or river water. It is also known as pied crested cuckoo, pied cuckoo, or in Hindi “kala papiya” and in Sanskrit: चातक).

This is a member of cuckoo that is mostly found in Asia and Africa. A black and white migratory bird, giving the signs of monsoon rains to be started soon. Moreover, this cuckoo species is widely mentioned in ancient Indian poetry as “Chataka”, meaning the bird’s beak atop of its head and wait to quench its thirst with rain waters only. In the subcontinent, the bird migrates as a summer breeding resident to northern India and is believed to migrate to Southern Africa as well. However, it is considered larger and longer winged than the subspecies found in Sri Lanka.

This is a slim, medium-sized cuckoo with a distinctive crest. During the flight, the cuckoo wing patch is seen on the black wing and a remarkable pattern makes it unmistakable. The young bird’s skin is a bit darkens from pink to purplish-brown within 2 days of hatching, as well as the mouth linking is little red with yellow gape flanges.

Jacobin Cuckoo or Pied crested cuckoo is very vocal during the breeding season. Their sound is a ringing series of whistling notes ‘piu-piu-piu’ with the sounds propose more rapid and slightly mellower.

In Africa, the Pied Cuckoo is distributed to South Sahara and in Asia, it is found South of The Himalayas, and some parts of Myanmar, Pakistan, and Sri Lanka. And these bird movements are evident in residents in tropical Africa. Also, the east African cuckoo is migratory and moves towards Southern Arabia and India in the month of April, and May. Here you can watch a video of Jacobin Cuckoo relaxing on an electric pole in Pakistan.

Jacobin Cuckoo habitat mainly in open woodland, dry scrub, and thorny area. It is observed that this bird avoiding areas of dense forest or harsh dry environments. Jacobin Cuckoo is a brood parasite, lays the egg in the nests that belong to the other birds, preferring Red-vented bulbul and jungle babblers. In north India, the breeding season usually lasts June to August, and in South India, they breed from January to March.

The pied cuckoo is often targeted as prey by the sparrowhawk (Accipiter nisus), which has been recorded attacking the significantly larger cuckoo by forcing it to the ground with its talons, then ripping away with its hooked beak.

Jacobin cuckoos feed on grasshoppers, beetles, small insects, which include hairy caterpillars, which he picked up from the ground. They are found of small caterpillars, which they pressed from the end to take off the guts and then swallowed. If the food is rare, then they feed the berries and other fruits.

During the breeding seasons, these birds do give calls from bulging perches and follow each other with slow wing beats and clapping flight, just like pigeons. The egg’s colors are turquoise blue, slightly bigger than the common babbler. According to Wikipedia

“Babblers in the genus Turdoides are communal breeders, and cuckoo chicks are raised by several members of the group. A pied cuckoo chick was observed to be fed by four jungle babblers.”

This species is in large numbers and does not reach the threshold of vulnerability. Therefore, the population trend to be stable, and it is considered at least a concern.