Jack fruit is well believed to have originated in the mountainous region of the Western Ghats of the Indian peninsula. It is supposed to have spread from India to other tropical countries such as Malaysia, Burma, Sri Lanka, Indonesia, Brazil, Jamaica, etc.

Jack fruit (Artocarpus heterophyllus) is one of the most important underutilized fruit belonging to the family “Moraceae” and to the genus Artocarpus. That includes evergreen or deciduous trees producing more yield than any other fruit tree species and bearing the largest edible fruit.

But it is regarded as a minor fruit and is often found on regular plantations. This genus comprises about 100 species distributed in the Indo-Malayan region and China. Among the several species of Artocarpus which occur in India, Artocarpus chaplasha, Artocarpus hirsuta, and Artocarpus lakoocha are important timber-yielding trees. Jack Fruit is one of the most strange food in the world.

The energy of Jack Fruit

Jack fruit is cheaply available in large quantities during the season. The energy available to humans from jack fruit has been calculated to provide approximately 2 MJ/Kg wet weight of ripe perianth. For this reason, it is commonly referred to as “poor man’s breadfruit”. On account of its fruit size, it ranks first among all the fruits in terms of the quantity of edible matter produced per unit area.

Jack fruit tolerates a wide variety of soils, provided those are well-drained. However, it prefers deep and well-drained alluvial soil. Jack fruit seedlings start fruiting after eight to ten years, whereas grafts may fruit from three to five years.

The fruit is fully mature but unripe fruits are harvested and the fruit maturity is judged by dull appearance and a dull sound upon tapping. The yield varies from tree to tree and according to age. On average 5-100 fruits of medium size (6-10 Kg) are borne on adult trees.

The life span of the jack fruit tree for around 80 years. The jack fruit prices depend on size, quantity, type of fruit, and season. The fruit constitutes three parts: bulbs (34 percent), seeds (18 percent), and rind (48 percent) respectively. Generally, sweet bulbs are consumed by people.

The remaining parts such as seeds and rind are usually wasted. Jack fruit seed is encased in the soft-colored edible pulp and constitutes about 5.1- 12 percent of the fruit. It is eaten after roasting or boiling. Jack fruit is a highly fibrous fruit and is rich in nutritive value, containing 18.9 g carbohydrates, 0.8 g minerals, 30 IU vitamin-A, and 0.25 mg thiamine for every 100 grams.

Jack fruit has been reported to contain high levels of protein, starch, calcium and thiamine. It is a very good source of potassium and vitamin C. The leaves and stem bark have been used to treat anemia, asthma, dermatitis, diarrhea, cough and as an expectorant.

The fruits, seeds, and trunk wood have been described as containing chemical compounds with aphrodisiac properties. Currently, jack fruit seeds are underutilized in both human and animal nutrition due to a lack of information on their nutritional potential.

It is a rich source of complex carbohydrates, dietary fiber, vitamins, and minerals like calcium, zinc, and phosphorous. They contain lignin, isoflavones, and saponins, which are called phytonutrients and their health benefits are wide-ranging from anti-cancer to antihypertensive, anti-aging, antioxidant, anti-ulcer, etc. Also, Jack fruit seed powder can relieve discomfort due to indigestion. 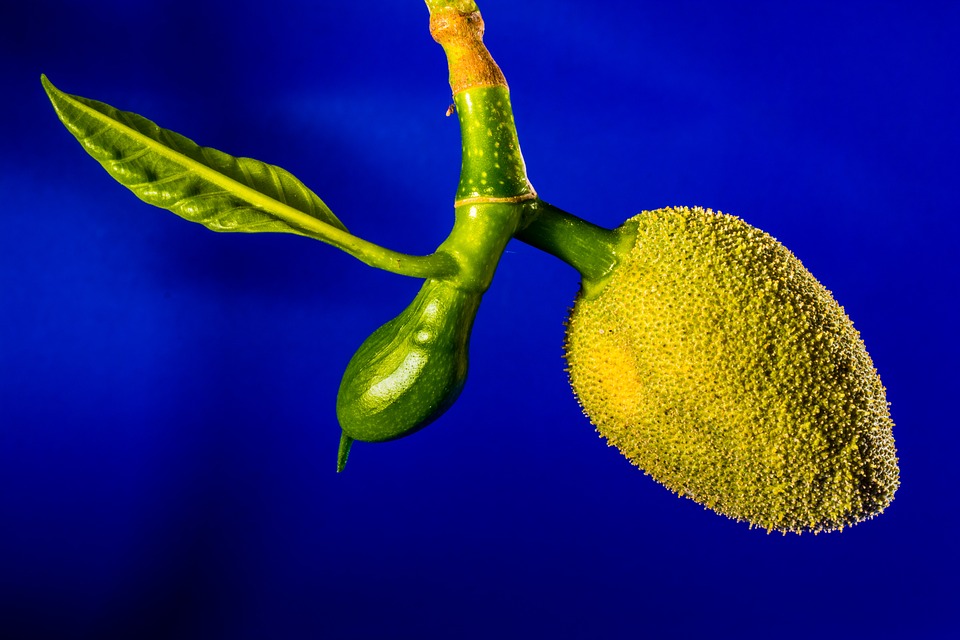 The seed is firm and waxy, oval, oblong, or oblong ellipsoid in shape. Each seed is 2-4 x 1-2 cm in size and 2.5-14 g in weight with a coriaceous testa. The testa is thin, leathery, thick, tough, parchment-like, and crinkly when dry. The inner seed coat is then covered with a brownish membrane.

The fleshy cotyledons are very unequal in size to the other. The endosperm present will be very small. The embryo has a superficial radicle, the basal lobe of the smaller cotyledon being undeveloped. Carbohydrates are the main component of the seed in the form of starch for human consumption.

Moreover, the seeds can be boiled or roasted and used in many culinary preparations. Almost, 25-53 percent of starch aided in the formation of a highly rigid gel. The incorporation of jack fruit seed flour in the manufacture of extruded snacks and vermicelli at varying levels of 30- 50 percent and incorporation of 40 percent level gave the best results.

The preparation of value-added product “Puttu” (traditional south Indian dish) from jack fruit seed flour with a combination of rice flour. Although seeds are nutritious, containing protein, carbohydrate, fiber, vitamins, and minerals and provide about 135 Kcal/100g of energy. They are not being exploited commercially by the processing industry since it contains a powerful trypsin inhibitor.

Jack fruit seed protein has a low biological value due to the occurrence of lectin components. Hence considering the above, an attempt was made to identify the pattern of utilization of jack fruit seed, to process seed into flour, and to utilize this seed flour in selected value-added products.

Jack fruit is an underutilized fruit crop and jack fruit seeds are wasted after the fruit is consumed. These seeds have great potential as a source of many important nutrients. Jack fruit is available in plenty in various parts of India. After the consumption of the fruit, the seeds are usually wasted. The seeds are highly nutritious and provide around 135 Kcal /100 gm.

Jack fruit seed powders were tested as a substrate to produce pigments by Monascus purpureus grown using solid-state fermentation (SSF). The protein content in the jack fruit bean was 7.81-12.46 %.

Probably the protein content varies from seed to seed and it may also depend on the ripening stage of the seed. The proximate composition of the jack fruit seeds varieties is that they are good sources of carbohydrates, protein, and minerals.

To extract jack fruit seed flour, jack fruit seeds were boiled for 15-20 minutes; water was decanted and cooled in order to remove the seeds and outer skin coat. Seeds were cut into 3-4 pieces and dried in sunlight or a hot air oven (400C) for 48 hours. Dried seeds were ground into flour sieved and stored.

Production of starch from non-cereal crop sources has a lot of scope for the industry with respect to value-added starch-based products indirectly generating higher employment and saving the country’s foreign exchange. The jack fruit bulbs were separated, seeds washed thoroughly with water, and spermoderm was peeled off.

The peeled seeds were slurried with an equal weight of a 0.5 percent solution of NaHSO3 in a Waring blender and the slurry was pressed in cheesecloth to remove seed fibers, rewashed and decanted at 4-50C and then washed with 80 percent ethanol and dried at 300C for 48 hours and starch yield was 10-15 percent.

The foaming capacity of the jack fruit seed flour showed greater foam volume at the initial period of 8 ml followed by 7ml at 30 minutes and later at 60 minutes interval. Foam volume decreased further to 5 ml and at 120 minutes foam volume was only 4.5 ml. It was observed that in the case of jack fruit seed starch and corn starch foam did not form at all.

How to Grow Delicious Beets?

Butcher’s Broom – The Fruits Grow on its leaves