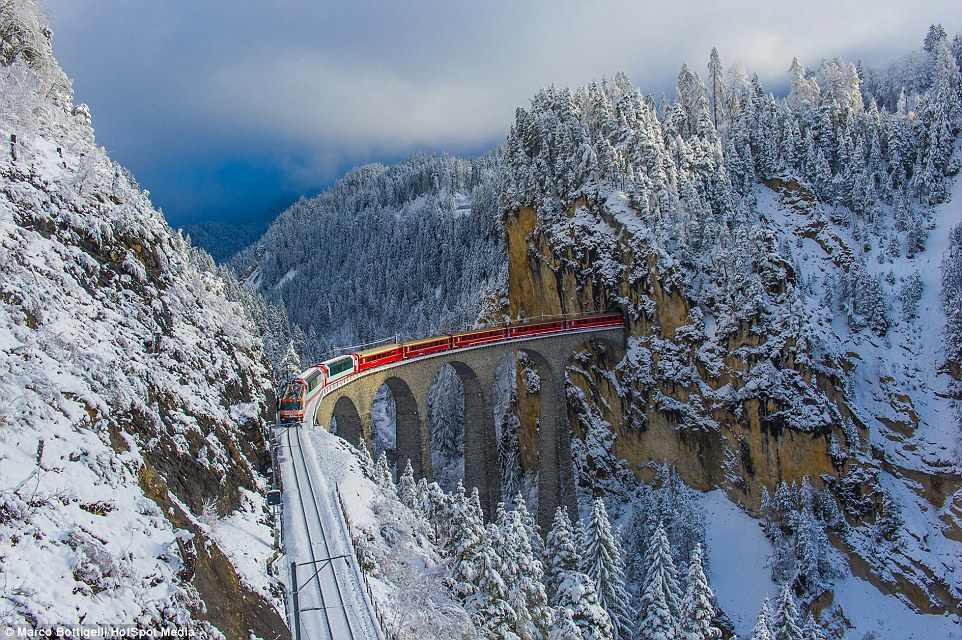 We’re sure, the train won’t you miss out, as incredible photographs display the highest railway service in Europe piercing through snowcapped mountains in the Alps. The train rolling across a 213-foot-high viaduct in the Alps, the red carriages of the Bernina Express adds a splash of color to the remarkable snow-covered Swiss surroundings. Therefore, the passenger train was magnificently picturized on the Landwasser Viaduct, which towers over the Landwasser River in Filisur, Switzerland. The train called “Bernina Express” actually connects Chur in Eastern Switzerland to Tirano in Northern Italy.

The place is so popular being on the highest railway line in the Alps and the highest point on this line is situated 7,391 feet above sea level. It’s been more than one hundred years; The Bernina railway line was built between 1908 and 1910 and was operated independently until the 1940s, when it was acquired by the Rhaetian Railway, a Swiss transport company.

Two Italian photographer Francesco Vaninetti 36, and Marco Bottigelli 34, planned to travel on the Bernina Express and captured the stunning views from the train. The gifted photographer pair also having disembarked, they scouted locations and photographed the train as it traveled through Schmitten and Filisur in Switzerland. They said, we’ve never seen such views like this on train and it was absolutely spectacular, and our most admired part of this journey to see the train travel over the Landwasser viaduct. When train comes out of a mountain cave and right onto a 213-feet-high, six-curved arch limestone bridge. So, the bright, red color of the train carriages actually stood out against the crisp snow and blue skies.

They have spent a day traveling on the railway, which spans 75 miles of railroad and passes through 55 tunnels and crosses 196 bridges. However, heavy snowfall adding the nature beauty and the entire area turned into an amazing winter wonderland. It seems like a fairy tale book. We’re extremely lucky to be able to depict the snowy scenery like this is becoming rarer as the years go by, perhaps due to global warming. And we are really hoping that these photos can act as a reminder that action needs to be taken to protect the beauty of our planet.