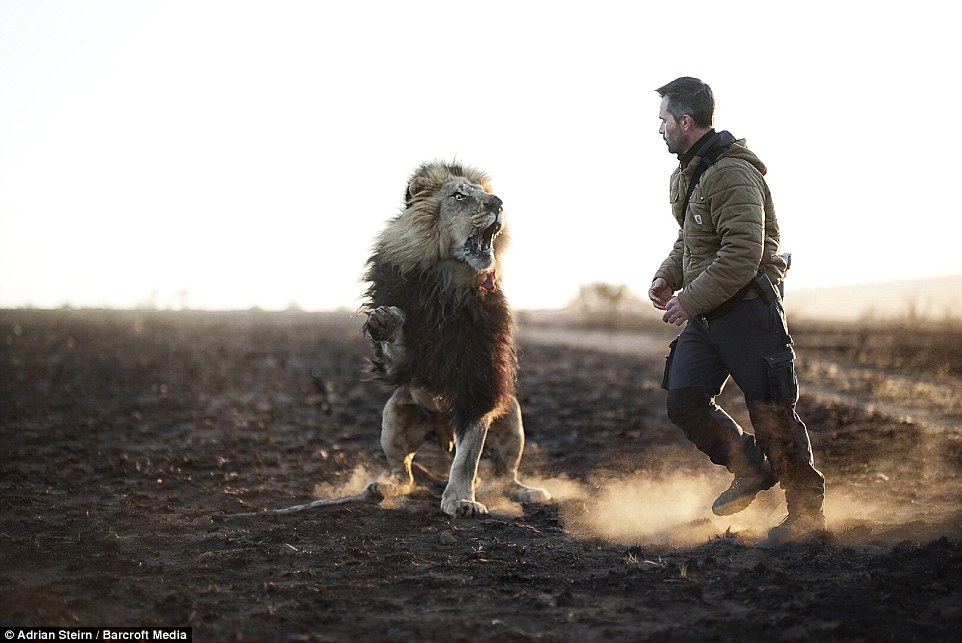 These incredible images shows, how bond between a man and his pride of big cats. A pride of African lions and the world distinguished “Lion Whisperer” Kevin Richardson have become the likely stars of a glossy Mercedes-Benz advertising campaign. The majestic animals climb onto the bonnet of a Mercedes SUV in his wildlife sanctuary in Pretoria South Africa. In the playful photo series, photographer Adrian Steirn is being busy to raise awareness of the plight of animals in the Africa. His main aim is to take a single picture which shows what legacy we will leave for our future generations. Therefore, in one photo Kevin Richardson wrestling comfortable with two fully grown lions. The 36 years old photographer hearing a 2 tonne jeep creak and move and observe the dents in the car that the lion had left behind.

It was extremely unbelievable experience and fascinates to see the size of their paws. The lions were off to jump onto the vehicle, how acrobatic animals they are. Kevin Richardson is a conservationist and founder of wildlife sanctuary, brought millions their fans into discussion about lion conversation. He has now more than 30 lions and have an intimate bond with his cats. His best practice to use love, understanding and trust to develop bonds with animals. Although, he has shown his skills in several documentaries mainly focus in relationship with the animals. He wanted to show the plight of lions both in captivity and in the wild.

Sterin the photographer is extremely bewildered with the relationship between Kevin’s and big cats. He put his soul and heart into lion conversation, show their massive value to our world in this ways was a great opportunity. The lions weren’t wild but habituated lions with huge carnivores. They are extremely big animals so a natural fear absolutely in my heart, and I was very well aware of them because things can go wrong very quickly with the lions. They’ve finished their worked within 48 hours in Pretoria Welgedacht Private Game Reserve. These days, lions numbers are significantly decreasing and current population roughly fall in to 20,000 only as compare to 100,000 in the early 1990’s.