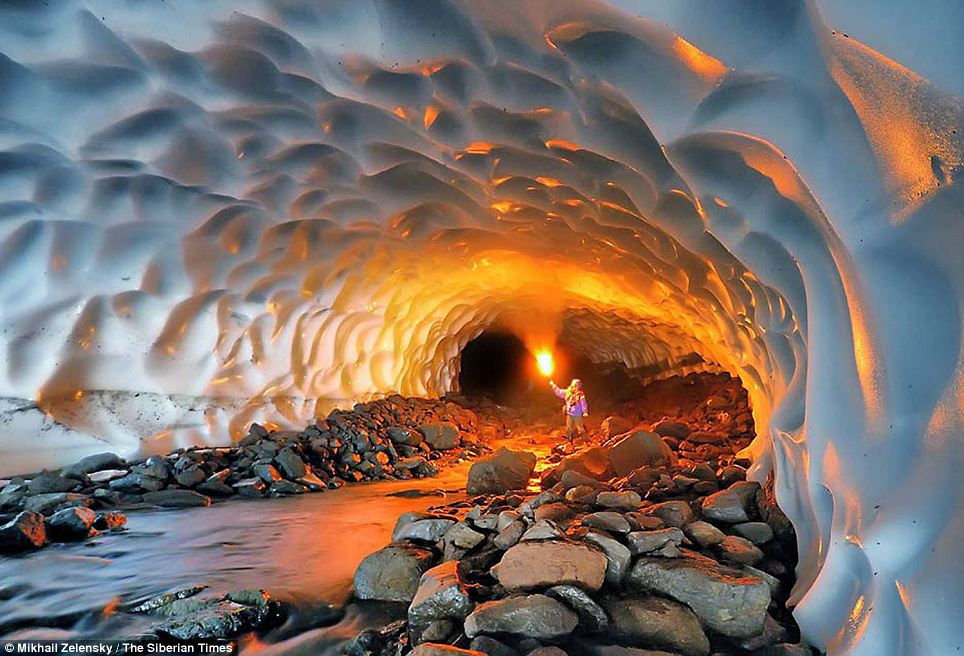 The majestic ice cave is located on the Kamchatka Peninsula of Russia. The Kamchatka Peninsula, is a region of exceptional natural beauty with its large symmetrical volcanoes, lakes, wild rivers and spectacular coastline. The Ice cave is about 1 KM long tunnel was formed by a hot water spring flowing beneath the glacial ice fields on the flanks of the nearby Mutnovsky volcano. Hence, with multicolored lights gently glowing from a translucent ceiling, a stream rippling through rocks beneath and a bright light in the distance, this tunnel looks like a passage to fairytale world. The breathtaking cave carved out of the living rock and ice of this world albeit on a remote fringe show ice caves carved by volcano-fed hot springs through the glaciers of Kamchatka. The magical caves lights shining purple, blue, green and yellow are no computer trickery as they are the result of sunlight streaming through the glacial ice into the hidden world below.

The cave was carved out of the glacier by an underground river that is sourced in a hot spring gushing from the Mutnovsky volcano itself, as this volcano is the heart of Kamchatka. And the heart is literally beating and you can feel it while the earth is slightly moving under your feet’. The glaciers on Kamchatka volcanoes have been melting in recent years, result in roof of this cave is so thin that sunlight penetrates through it, strangely illuminating the icy structures within. The magical place has only been explored due to its remaining off-limits to outsiders until the 1990s. The modest human exploitation has kept the peninsula and its flora in largely pristine condition. Outside, the glacier was very dirty and grey. But inside, everything was different. As the melting snow and light passed through the thin walls, reflecting surprisingly bright colors and walls and ceiling of the frozen world are made up of layers of compacted snow, with the river softly gurgling through a long chamber illuminated by light glinting through windows made of ice. It is hard to find such places without a guide at the moment, it is impossible to get there as half of snow covering everything.