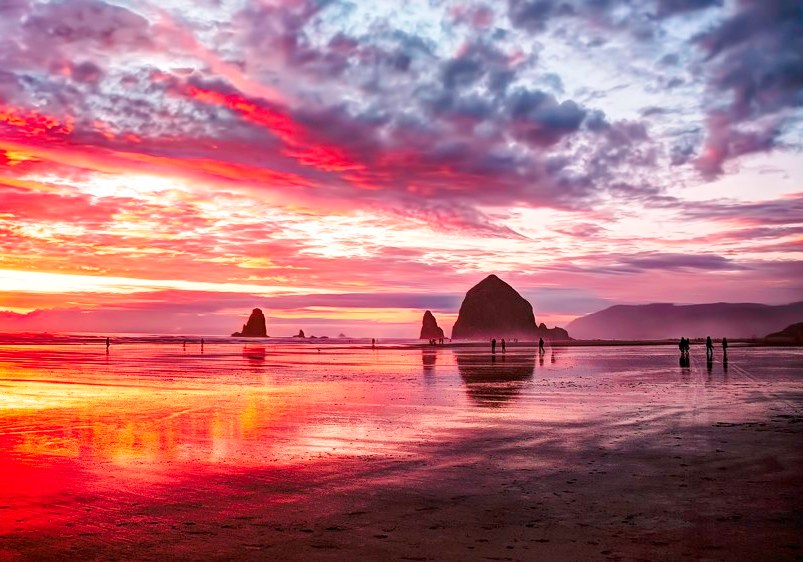 Haystack Rock is a 235-foot sea stack in Cannon Beach, Oregon. It is sometimes claimed locally to be the third-tallest such “intertidal” structure in the world. But there are no official references to support this. Haystack Rock is located about 1.5 miles south of downtown Cannon Beach in Clatsop County and about 80 miles west of Portland.

This is a popular tourist destination is nearby to the beach and accessible by foot at low tide. The tallest and probably best-known Haystack Rock stands 327 feet above the sea and is the fourth tallest sea stack or off-shore monolith in the world.

The monolithic rock tide pools are home to many intertidal (meaning it can be reached by land) animals, including starfish, sea anemone, Chitons, crabs, limpets, and sea slugs. The rock is a favorite nesting site for many sea birds, including terns and puffins. Haystack Rock is one of the most identifiable geological formations of Oregon.

There are 6 other geographic features in Oregon named Haystack Rock, including two others along the Oregon Coast and others throughout the U.S. Haystack Rock is accompanied by several smaller rocks known as The Needles. The other Oregon coastal Haystack Rock stands 105 feet above sea level in Coos County near Bandon.

This is composed of basalt, formed by lava flows emanating from the Blue Mountains and Columbia basin about 15 million years ago. The lava flows formed numerous Oregon coast’s natural features, including Tillamook Head, Arch Cape, and Saddle Mountain. Haystack Rock was once joined to the coastline but the passing of centuries the erosion has since separated the monolith from the coast.
Advertisement

The Rock Awareness Program (HRAP) is a stewardship and environmental education program whose mission is to protect, through education, the intertidal and bird ecology of the Marine Garden and Oregon Islands National Wildlife Refuge at Haystack Rock.

In 1990, Haystack Rock was granted Marine Garden status collecting plants or animals is strictly prohibited. The Haystack Rock Awareness Program is a volunteer association which conducted educational seminars at the rock during low tide between May and September. Climbing above the mean high tide level disturbs nesting birds and is not allowed.

At Rock visitors can view several species of marine wildlife in there natural habitat during low tide. The thin strip of rock and sand that connects it to the beach features many tide pools. The area surrounding the rock is popular for picnicking, kite-flying, and bird-watching. Moreover, it is an ideal place for photographers to capture the majestic beauty of Haystack Rock on canvas or on film.

Many people each year become temporarily trapped on Haystack Rock when high tide engulfs the rock in water, necessitating rescue by the United States Coast Guard or local authorities. Oregon’s beaches are congested with tourists in summer make the beautiful beachfront within walking distance of Haystack Rock.