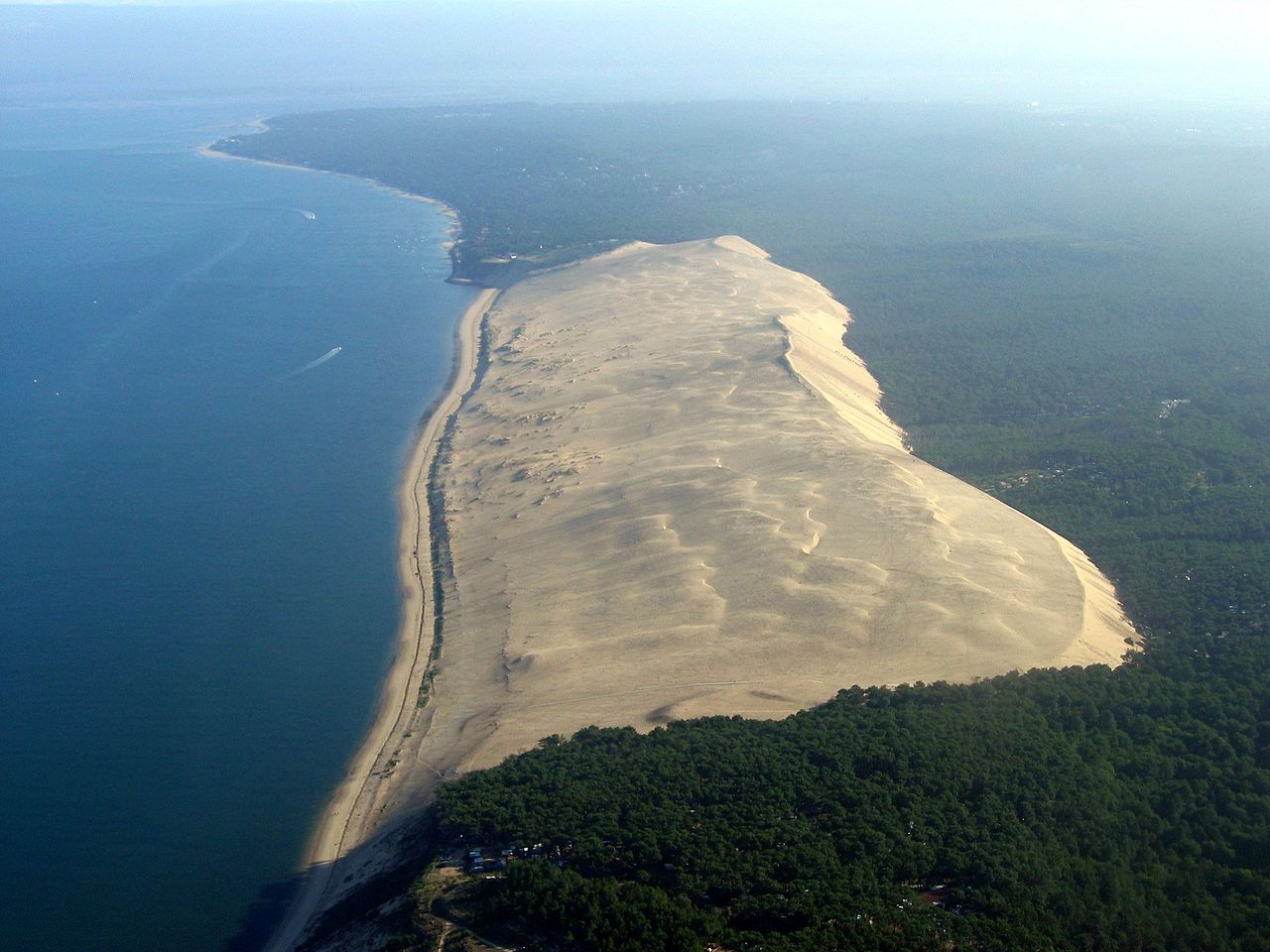 Most of you heard about Asian or African deserts. But have you ever heard about the Desert in France? They’re is a little piece of natural phenomena found on the soul of Europe. The Great Dune of Pyla is a rare geological phenomenon and a very popular tourist attraction. This is being the tallest sand dune in France. Europe’s tallest sand dune nestled between the Atlantic Ocean, an enormous pine forest, the Arcachon Bay, a sandbank and a peninsula!

The Great Dune of Pilat, located in the municipality of La Teste-de-Buch 60 km from Bordeaux in the Arcachon Bay area.  Great Dune of Pyla is also called “Great Dune of Pilat”. The sand dune is huge about 500 meters in width, 3 km in length and rising to a height of 107 meters above sea level.

The dune is considered a foredune, meaning a dune that runs parallel to a shoreline, behind the high tide line of a beach. Every year, more then one million visitors come to see this unexpected beauty. The interesting part of the dune is relentlessly moving inwards, gradually pushing the forest back to cover houses, roads and Atlantic Wall.

At some times, it was moving back 10 meters in a year, but after that rate of movement is discontinuous. In the last 60 years, the great dunes have moved around 280 meters giving an annual displacement of 4.9 meters per year. The endless dune landscapes you find in desert Arab countries. However, in the contrast between the sand and forest makes this European sand dune an even more striking sight.
Advertisement

So, moving Great Dune covered about 22 private properties. Even a road of North East part was overlapped in 1987 after an avalanche of sand, the buried in 1991. A house was buried over the dune is referenced in a newspaper on September 19, 1936. The South East of the dune, a Bordeaux family had decided to build a villa in 1928.

However, after 20 years, the sands started to invade the house had completely disappeared over the sands. This Desert in France is famed for the exceptional scenery it offers from its peak. You can see on one side the huge pine forest and on the other the Atlantic, the headland.

This slope is really a challenge for everyone. The only athletic person can be climbing up in an efficient way. For the others, a staircase makes the ascent a little easier. The Man-made stairs protrude to top view which majestic. The seacoast and vast pine forest of Les Landes is more enjoyable when the weather is clear, the Pyrennees range.

Due to it’s exposed location along the sea and steep angle. The Dune of Pilat is a famous paragliding spot with great soaring conditions. These special ingredients make it a unique landscape probably throughout the world. It is sometimes described as a “menacing sand wall” or even called a “sand monster” swallowing up “parts of France”.

The Desert in France is a magical place. One can climb it, jump in it, run up and down. Also take selfies, photography, stay and wait for the sunset for astonishing. If someone feels energetic then you can scramble up the dune freestyle!