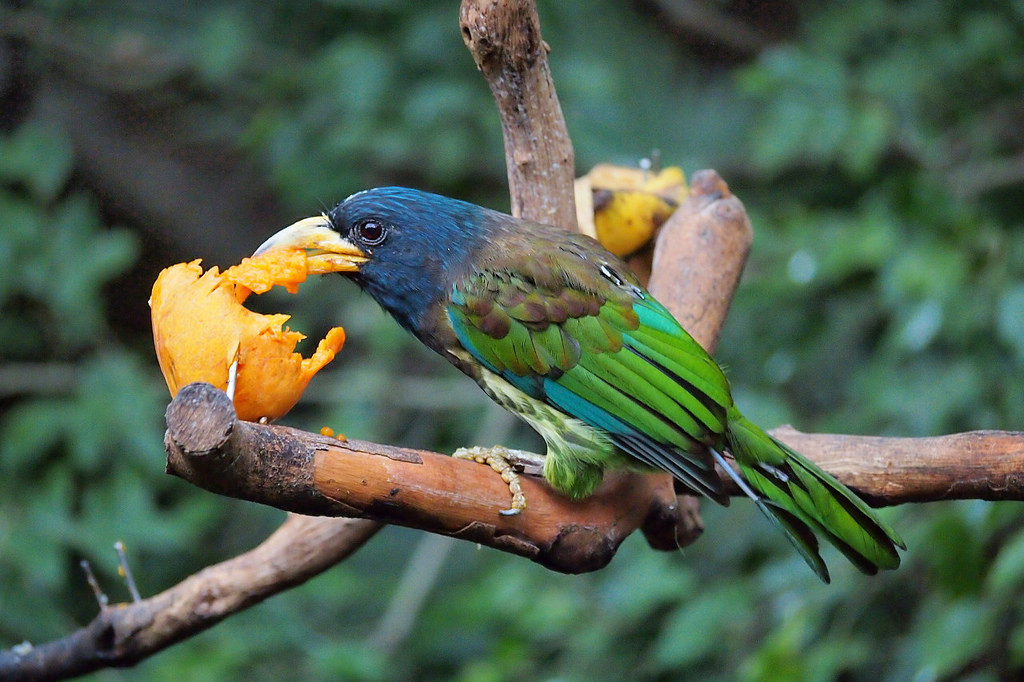 The great barbet “Psilopogon virens” is an Asian barbet, are a group of near passerine birds with a worldwide tropical distribution. The bird gets their name from the bristles which fringe their heavy bills. This is the largest barbet at 31–33 cm in length and a weight of 192–295 g. It is a plump bird, with a short neck, large head and short tail. The adult has a blue head, large yellow bill, brown back and breast, green-streaked yellow belly and red vent.

The rest of the plumage is green. Both sexes and immature birds are similar. The great Barbet is a resident breeder in the lower-to-middle altitudes of the Himalayas, ranging across eastern Pakistan northern India, Nepal and Bhutan, Bangladesh and some parts of Southeast Asia, as far away as Laos.

The bird nesting season is from April to July, typically builds nests in tree holes. The average clutch consists of 2 – 4 eggs (occasionally 5) that often show very faint, depressed lines running longitudinally down the eggs. The incubation period (to hatching) is about 13 – 15 days. The male and female birds share the parental duties.

The Great Barbets mostly feed on fruits, flowers, buds and seeds, but will also eat a wide range of insects, including moths, mantis, ants, cicadas, dragonflies, crickets, locusts and beetles. They usually forage in the higher branches of tall trees.
Advertisement

The male’s territorial call is a very loud kay-oh. The alarm is a harsh keeab, and another call is a repetitive piou–piou–piou–piou. They are typically found in broadleaf evergreen forests between about 2,000 – 8,500 feet.

They are usually seen alone or in pairs, except after having raised young in which case fledglings may accompany them. Larger numbers of them may occur at favored fruit trees. This species has an extremely large range, and hence does not approach the thresholds for Vulnerable under the range size criterion.

The population trend appears to be stable, and hence the species does not approach the thresholds for Vulnerable under the population trend criterion, and species is evaluated as Least Concern. Also Read ! Himalayan Bluetail ! Gorgeous Small Passerine Bird