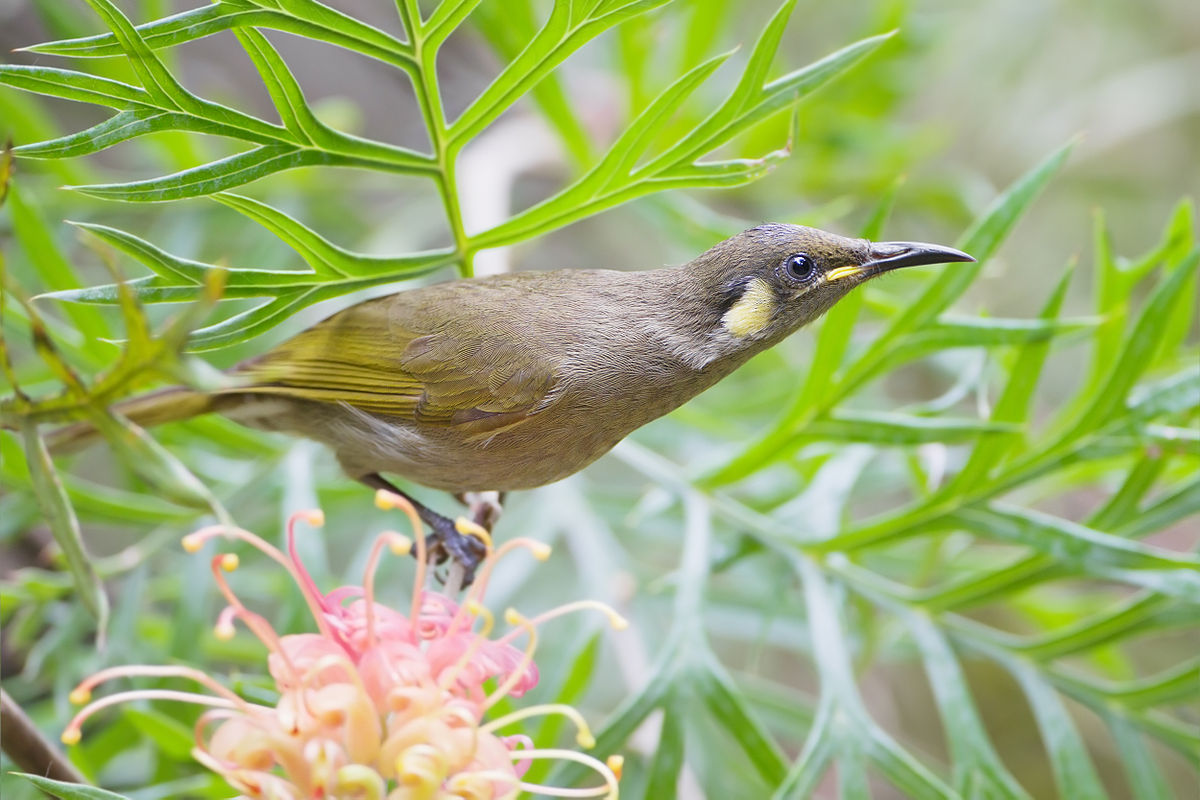 DESCRIPTION – Graceful Honeyeater is the Australian third member of Meliphaga, a group of rainforest-inhabiting honeyeaters. Which are centered in New Guinea, have plain olive-green plumage, yellow-cream gape line, and a flared yellow or white spot on the ear coverts.

SIMILAR SPECIES – In all aspects of its behavior, diet, and breeding, the Graceful Honeyeater resembles the Yellow-spotted, with which it lives in the lowland rainforests and mangroves of northeastern Queensland. Both birds forage in foliage from near the ground to the forest canopy and along its edges out into eucalypts and gardens, seeking insects, fruit, and nectar.

The Graceful Honeyeater is the smaller and more slender-billed of the two and is particularly acrobatic, often hanging upside down, flitting about or hovering to pick a fruit or snap up an insect. Generally, it works in ones and twos through the upper strata of the forest, feeding more consistently in the canopy than the Yellow-spotted, and sometimes gathering there in loose aggregations to rifle blossom in profusely flowering tree crowns.

The birds come and go continually in these food trees. Contact is kept-and position identified by a sharp, single tick call, given day-long. It is easily distinguished from the harsh tchu-chua call of the Yellow-spotted Honeyeater.
Advertisement

Graceful Honeyeaters appear to be sedentary throughout their Australian range and keep to the lowest most tropical altitudes of all northeastern Queensland meliphagas. Only in the Mcilwraith Range on the Cape York Peninsula do they occur regularly above 500 meters. Unlike Yellow-spotted Honeyeaters, they occur in New Guinea where they are widespread in lowland rainforests and mangroves around its south and east coasts.

IDENTIFICATION – ADULTS: Both sexes are alike, however upperparts, wings, and tail plain mid are olive-green; forehead and lores are duskier green.  A line from the base of the bill to below eye is yellow-cream; malar area and cheeks to the edge of ear coverts are olive-green and ear-coverts with a flared cream-yellow patch.

The underparts are pale to mid plain olive-green and eye mid to deep brown. The bill is black; gape yellow-cream along with Feet gray-horn. It closely resembles Yellow-spotted Honeyeater but distinctly smaller, slightly paler, and with a proportionately longer and slender bill: width at the base of the bill is 3.4-4.4 mm, compared with 4. 5-5.5 mm in Yellow-spotted. IMMATURE: As adults but faint yellow wash on underparts; the base of under mandible buff-brown.

CALL – Graceful Honeyeater call is a bit of sharp tuck or tick in contact.

SONG – Graceful Honeyeater song is the thin whistle, rarely given.

NESTING – The breeding season starts from October to February. They build a cup-shaped nest about 70 x 70 mm outside, made of palm fiber, bark, rootlets, grass, and leaf skeletons, bound with cobweb, covered with moss and lichen; lined with plant down or soft grass; suspended by a rim of tree or bush, 2-6 m above ground, on rainforest edge or over water.

EGGS – The clutch contains usually two smooth glossy eggs, salmon flesh with chestnut and purple-red spots forming a zone at the large end; oval, about 20 x 15 mm. The incubation period is about 14-15 days. The young fledge the nest in about 14-15 days.

You May Also Like This – The Shy Red-lored Whistler 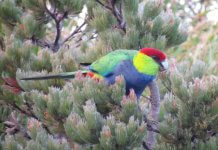