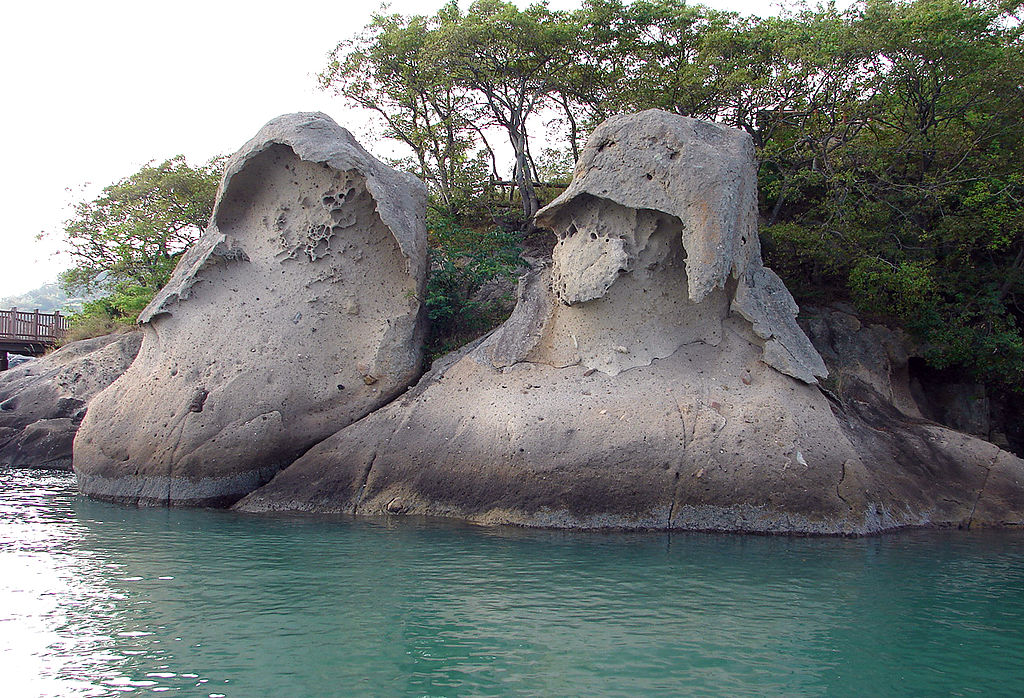 In South Korea, Gatbawi is a natural sandstone and Tafoni formation found near the mouth of the Yeongsan River. Gatbawi means “hat rock” because it is a rock shaped like a hat. Also, there is a traditional Korean costume item worn like a hat resembling a Satgat, or a traditional Korean conical bamboo rain hat. The two individual formations are named Jeongbawi and Satgatbawi. The larger rock is called the “father” and the smaller is called the “son”. Gatbawi is one of the 8 famous spots of Mokpo and was designated Natural Monument Number 500 in April 2009.

Gatbawi is a natural tafoni small cave-live feature found in granular rock such as sandstone, with rounded entrances and smooth concave walls formation between 6 to 8 meters in size. There are two folk legends surrounding the origins of the rock formations that compose Gatbawi. There is a story associated when a long time ago, a young man lived with his sick father and sold salt. However, he was a poor but kind man who would do anything to help his sick father.

The young man worked as a farm hand for a rich house to save money to cure his father’s illness. He did his job in an excellent manner but, in the end, his master didn’t pay him. Unfortunately, when he returned home after one month, he found his father’s body was already cold. Then, he was repenting his decision that he had been foolish to not caring for his father for one month.
Advertisement

The least he could do was to try to make him comfortable in the afterlife. Unluckily, as he was moving his father’s body, he slipped and dropped the coffin into the sea. He felt awful about his father’s underwater burial. To make amends, he remained in that spot, wearing a bamboo hat until his death so that he too could not see the sky. Sometime after his death, two rocks rose up at Gatbawi.

Another interesting story attached with the rocks tells, when Buddha and a disciple traveled across the Yeongsan River, they took a rest in this place. After that, they kept on their journey leaving behind their hats. Thus, it is said that their hats became the rocks making them be identified as the monk rocks.

A pedestrian bridge called “Boyaenggyo Bridge” leads out over the sea surrounding Gatbawi. Earlier to the bridge being built in 2008, Gatbawi was only accessible by ferry. Since the addition of the bridge, visitors can visit Gatbawi on foot.