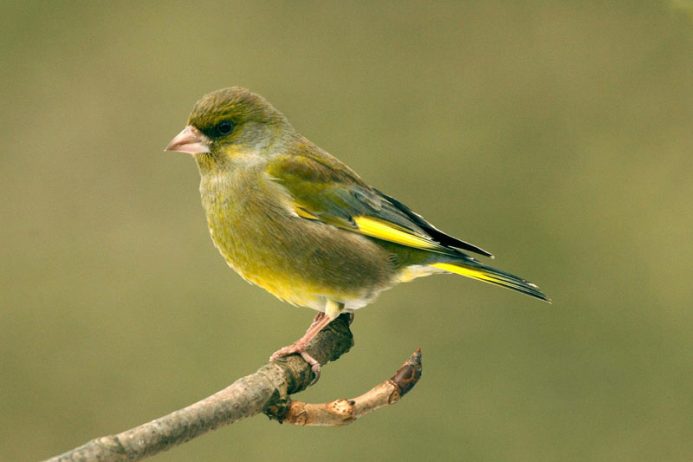 The Green Finches are the largest of a trio of British finches with partly green plumage (the others are the siskin and the rare serin). It is one of our more numerous birds, being well suited to our lowland countryside with it’s mosaic-like pattern of woods, farmland, hedgerows, thickets and gardens.

The Green Finches is one of the most widespread and abundant visitors to bird tables in Britain and Ireland. It is sometimes disparaged by birdwatchers who are captivated by the acrobatic feats of the blue and great tits as they hang on to strings of nuts. The green finch being a relatively large finch is not a particularly acrobatic feeder although, in several areas, it has learned to feed on hanging nuts.

Some people actually overlook it’s presence since it is similar in size to the ubiquitous house sparrow, and many green finches have rather little yellow or green on there plumage which strengthens the resemblance. The adult male green finch is a handsome bird, with brilliant yellow flashes on the wings and tail-most obvious when in flight and washes of green and greenish yellow over the rest of the plumage.

The female and the young of either sex are less highly colored, with much brown streaked plumage like a sparrow’s. In recent years another much smaller finch, the siskin, has also taken to feeding in gardens, mostly at the end of winter, but they’re is little chance of the two being confused.

As with many of our garden and farmland bird species, green finches are naturally birds of the woodland edge, finding hedges in arable land, and shrubberies in parks and gardens, ideal places for breeding. They can be found over most of Europe, spreading into Asia in the east and to north Africa in the South.

But they’re absent from the far northern parts of Europe and Asia, which lack trees of shrubs. Many areas in Britain have reported recent spreads in the breeding range and local increase in numbers.

Green Finches feed on seeds for almost all there lives. In the autumn the flocks of young birds, which are soon joined by the adults, may become very numerous, with some numbering in the thousands. These large flocks are sometimes seen feeding on ripening corn, gleaning the stubble’s or feasting on weed seeds in root crops or on waste ground.

There weight generally precludes feeding from seeds still held on the plants, but they are adept at finding seeds on the ground. They can live well on open ploughed land, finding dormant seeds which may, in some cases, be several years old.

The weeds particularly favored include charlock, persicaria, groundsel, chickweed and fat hen. When a large flock has found a good feeding site. It is quite possible to hear the birds from thirty to forty years away not from there calls but from the cracking of seeds in there bills. All the food is first manoeuvred in the bird’s beak to remove the husk for green finches only eat the central nutritious part.

The autumn flocks frequently contain other finch species, but during the evening the Green Finches tend to roost on there own. The roosting site is often a clump or rhododendrons, laurels or an old hedge with plenty of holly or ivy.

The birds prefer roosting sites which are not particularly high but have plenty of thick cover. Ringing results have shown that the birds move regularly from roost to roost and that in general they are a mobile and nomadic species.

Their are not many indications of movements over 200 or 300 km within the British population, but many birds from the northern part of the European range travel 1000 km or more each autumn and spring. In cold winter weather is not a serious threat to survival provided that the feeding grounds are clear of snow.

If the weather is very cold and the day length is very short, they may find it difficult to take in sufficient food to see them through the night. In such circumstance and during snowy weather many more may join the flocks feeding in gardens.

Green Finches visiting gardens take almost any sort of seed. Hemp, peanuts loose on the ground or hanging and particular sunflowers seeds are favorites. As with several species observed at feeding stations, the numbers seen at any instant in a garden are a tiny proportion of all the individual birds using the site through whole winter.

As many garden bird feeders know, the number of Green Finches seen in gardens a peak in March and April, and many are still present in early May. Ringing returns show that this is the period when more green finches die in the wild then at any other time of year.

This is easily explained for the birds have been exploiting a stock of seeds which has not been replenished naturally since the autumn. The food supply has thus run out, and continued feeding by people who put out food for birds in there gardens is particularly important.

During the spring the males start to give there “dreeez” summer call. When displaying, they precede this by a rather weak, chattering song. Displaying males may sing and call from the top of a tree or bush, or may advertise there presence in a characteristic song flight. In most cases several pairs take up territories close together each male defending only a small area round the chosen nest site.

The nest is built of twigs roots and moss in late April or early May. It is lined with fine grass roots, hair, wool or feathers. Four to six eggs are generally laid in each clutch and incubated for two weeks. The chicks are fed on insects for the first few days, but soon the diet is changed to regurgitated seeds. Two or three broods are often raised by a single pair, and young may sometimes be found in the nest as late as September.

In ideal condition, the two or three broods raised by a single pair of green finches could be expected to produce a total of about 20 birds where they’re had been only two at the beginning. Nature is not infarct so profligate, for although a highly successful pair may be able to produce three large broods, the great majority of breeding attempts actually fail.

Failure arises in many ways lack of food may cause starvation, one of the adults may die or be killed or a predator may find the nest and eat the eggs or young. Apart from these dangers, the eggs might be infertile the nest may be blown out of it’s bush or the bush may be destroyed during agricultural or gardening work.

In any case the production of eggs and the successful fledging of young is not the end of the parent’s responsibility, for they also have to look after the young birds, out of the nest, for a period of ten days or more, while they learn about the world and how to find food for themselves.

Besides all the difficulties that they have to face a breeding time, greenfinches are affected by wide variations in winter weather condition from year to year. Despite this the British breeding population as shown by the Common Birds Census farmland index, has remained constant over the last 25 years.

The two cold winters in 1961-62 and 1962-63 probably halved the population, but it had returned to an average level by 1966. Since than it has varied by less then 10% either way, except in 1975 when it was rather then normal. These figures are based on observation made on farmland perhaps the habitat holding the most stable populations. The figures relating to woodland are based on a smaller sample and show a rather greater fluctuation.

The prospect for this attractive bird looks excellent, with range expansions being reported during the present century.These have occurred in western areas, where the birds were formerly absent and also in city center areas. The most serious problem which they are likely to face arises from the increasing use of herbicides in cereal growing and other farming.

If the trend continues the range of species of weeds which are able to seed and thus produce natural winter feeding for the birds may be reduced. On current evidence, it seems likely that human bird lovers will more then make up for the deficiency, with the plentiful supplies of seeds and peanuts that they put out for the birds in there gardens. 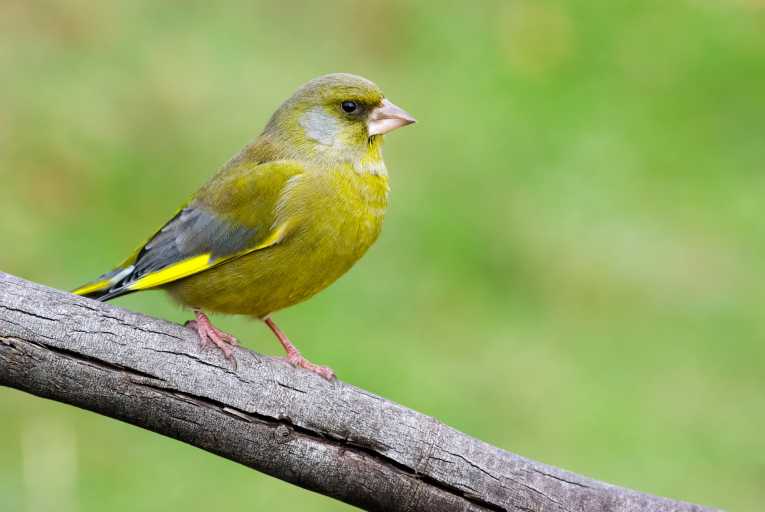 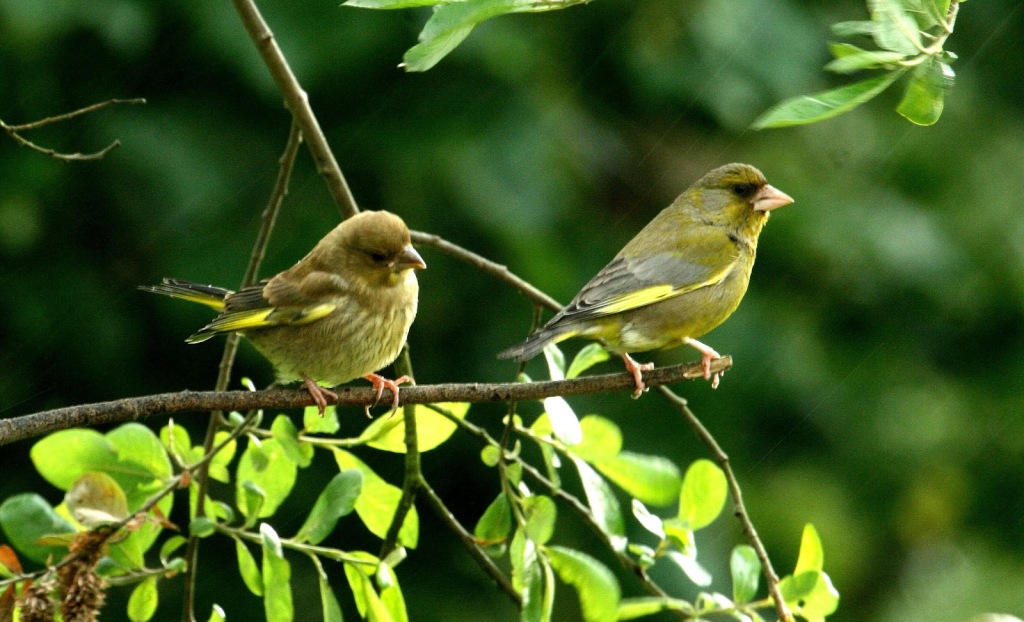